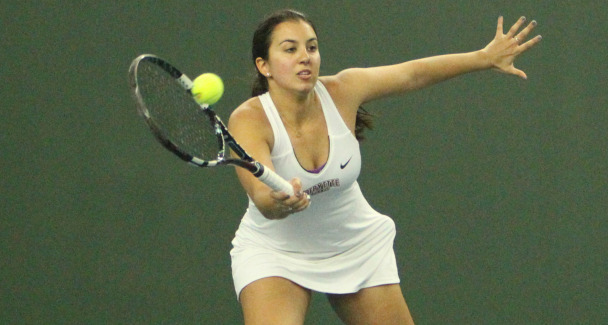 Katelyn Arnold: So you’ve had a really strong start to your final season, going 6-0 to open up the spring. How do you feel?

Rocine Moschella: I feel really confident in our team. We have a really unusual team this year. All the starters are seniors or freshmen, so it’s a really interesting team dynamic, but I think it works out really well.

KA: You were also named a captain. What was that like?

RM: I was very excited. I was actually a captain last year as well, but I feel like this year, being a co-captain with Tori [Almeida], we really have a good team dynamic.

KA: Has your role changed at all?

RM: I’d say not since last season. I think that this season though, because we have so many freshmen starting, my role on the team is really to be a role model for them.

KA: How does this season compare to your past seasons for you individually?

RM: I think this season, being a senior, I’m much more relaxed on the court and play with a lot less pressure.

KA: How does this team compare to other teams you’ve had at Lafayette?

RM: I think this is, so far out of my three years, close to the best, if not the best team that we’ve had. I think we have a really good chance to beat some teams that we’ve previously lost close matches to in the Patriot League, especially.

KA: What are you hoping to accomplish?

RM: We’re hoping to beat Colgate. That would be a really big win for us. Also, to finish above where we finished the last few years in the Patriot League.

KA: What about you individually?

RM: Playing for singles is really tough. There’s a lot of really good players at first, so I’d like to be able to win most of my matches at first singles.

KA: What has been your favorite tennis memory at Lafayette?

RM: I think it would be when we played Mount St. Mary’s last year, and I clinched the match for our team 4-3, and I won in the third set tie breaker.

KA: When did you start playing tennis?

RM: When I was four years old.

KA: Do you think you’ll continue playing after graduation?

RM: Yeah, I definitely think I’ll play for fun, either with my family or with friends just back at home.

KA: What, or maybe who, has been the biggest influence on you as a tennis player?

RM: I would say my mom. She really helped me growing up with all the training, and she plays tennis as well.

KA: You’re also a government and law and economics double major. What has been your favorite class you’ve taken at Lafayette?

RM: Professor Miller’s 300-level political theory course. It was a really discussion-based course and we were able to talk a lot about current events.

KA: What is your favorite campus hangout spot?

KA: One piece of advice you’d pass on to a freshman at Lafayette?

RM: I’d say, especially as an athlete, it’s what you make of it. What you put in is what you’re going to get out of the athletics at Lafayette.