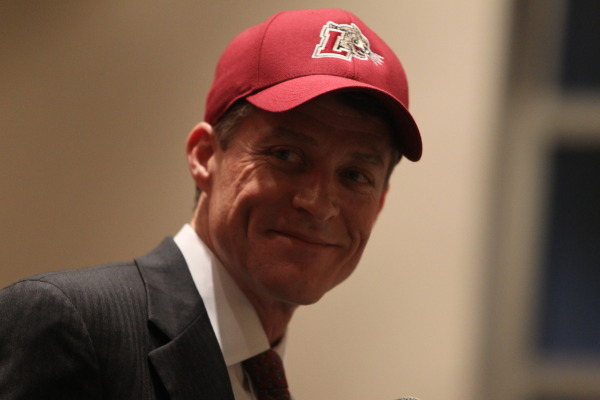 John Garrett takes over as head coach of the Leopards. (Courtesy of Athletic Communications)

With his recruiting class filled out and his coaching staff hired, football head coach John Garrett is finally settling into his new role.

Before being named the head coach of the Leopards, Garrett served as the offensive coordinator for the University of Richmond. Most of his coaching career, however, was in the NFL where he held a variety of assistant coaching and coaching positions with the Cincinnati Bengals, Arizona Cardinals, Tampa Bay Buccaneers and the Dallas Cowboys. Prior to becoming a coach, Garrett was a player in the NFL for four seasons with the Cowboys, Bengals and Buffalo Bills.

Garrett comes from a family of coaching. His brother, Jason, is the head coach of the Dallas Cowboys and his father, Jim, was an assistant coach and scout in the NFL for over 30 years.

The Lafayette sat down with coach Garrett for an exclusive interview. Below is the transcript, edited for length and clarity:

Michael Keating: You’ve had a hectic first couple of months between recruiting and filling out your coaching staff, how does it feel to finally be able to relax?

John Garrett: It’s not really relax, it’s transitioning into another phase of the job. It’s really been fun these first two months. People say, ‘Wow you must be super busy,’ and I am, but it’s a really good busy.

MK: Did you have trouble with recruiting after coming in and replacing [former head coach Frank] Tavani so late into the recruiting season?

JG: I don’t think we had trouble, when I was hired there were eight recruits that were committed here. Immediately what I did was watch their tape and determine if they were worthy of the scholarship in my mind. And that was determined to be the case, and my position on that is to honor their commitments because it’s the right thing to do.

MK: With coach Tavani, do you feel like you have big shoes to fill or have any added pressure replacing him?

JG: I don’t really look at it that way, you know you’re so focused on the job and the task at hand and implemented our culture. I think that’s for other people to think about, it’s really not our concern. Our concern is moving forward…it’s a new era of Lafayette football.

MK: The team has only won three games in the past two years, what’s the first thing that has to change?

JG: Number one, you got to get the players to believe they can win. And that starts with the culture and the motivation and, obviously, getting them prepared to be the best they can to succeed on the field. We got to get them to embrace challenges and handle adversity and be able to grind through it so they can have success.

MK: What do you think a realistic goal is for this season?

JG: Each year is a completely new team, we don’t talk about rebuilding. You cant afford to rebuild in the Patriot League, there are no redshirts so everybody has to have the mentality that they can contribute the first day they walk on campus. I don’t care if you’re a senior, junior, sophomore, freshman, walk-on, scholarship, whatever, if you have earned the right to play you’re going to play. We take it one practice at a time, one game at a time.

MK: You’ve been an assistant and position coach for your whole coaching career, why do you feel like now was the right time to become a head coach?

JG: I’ve been preparing for this for a long time. I’ve been in coaching for 25 years and have had some great experiences…I’ve really had a great opportunity and very fortunate to be under some fantastic coaches and be mentored by some really, really good coaches and good men. I think the timing is right.

JG: That to me isn’t a question of who’s most talented…there’s a lot of talented guys who don’t reach their potential. The guy I enjoyed coaching the most was Jason Witten. Just the consummate professional and extremely talented at what he does. One of the best at his position ever to play, but he also had this unprecedented work ethic and mental toughness to always improve and be the best at every aspect of his job…From the talent and ability he had, I learned how to coach the tight end position even better.

MK: There are no quarterbacks on the team that had had playing time. Is it an open competition for the starting role in the spring?

JG: Yeah, it’s an open competition at every position. It’s going to be real exciting at the quarterback position, there’s no incumbent or anyone that has ever taken a snap. It will be really exciting to see who emerges and grabs the reigns and becomes the leader of the team. And it’s going to be that way at every position, there are no incumbents and everyone has to earn the right to play. It doesn’t matter if you’re a scholarship player or walk-on. I’ll even ask them whether they have a scholarship or not. We’re just going to watch the guys out there, ask them to compete and go be noticed and we’re going to play the best guys.