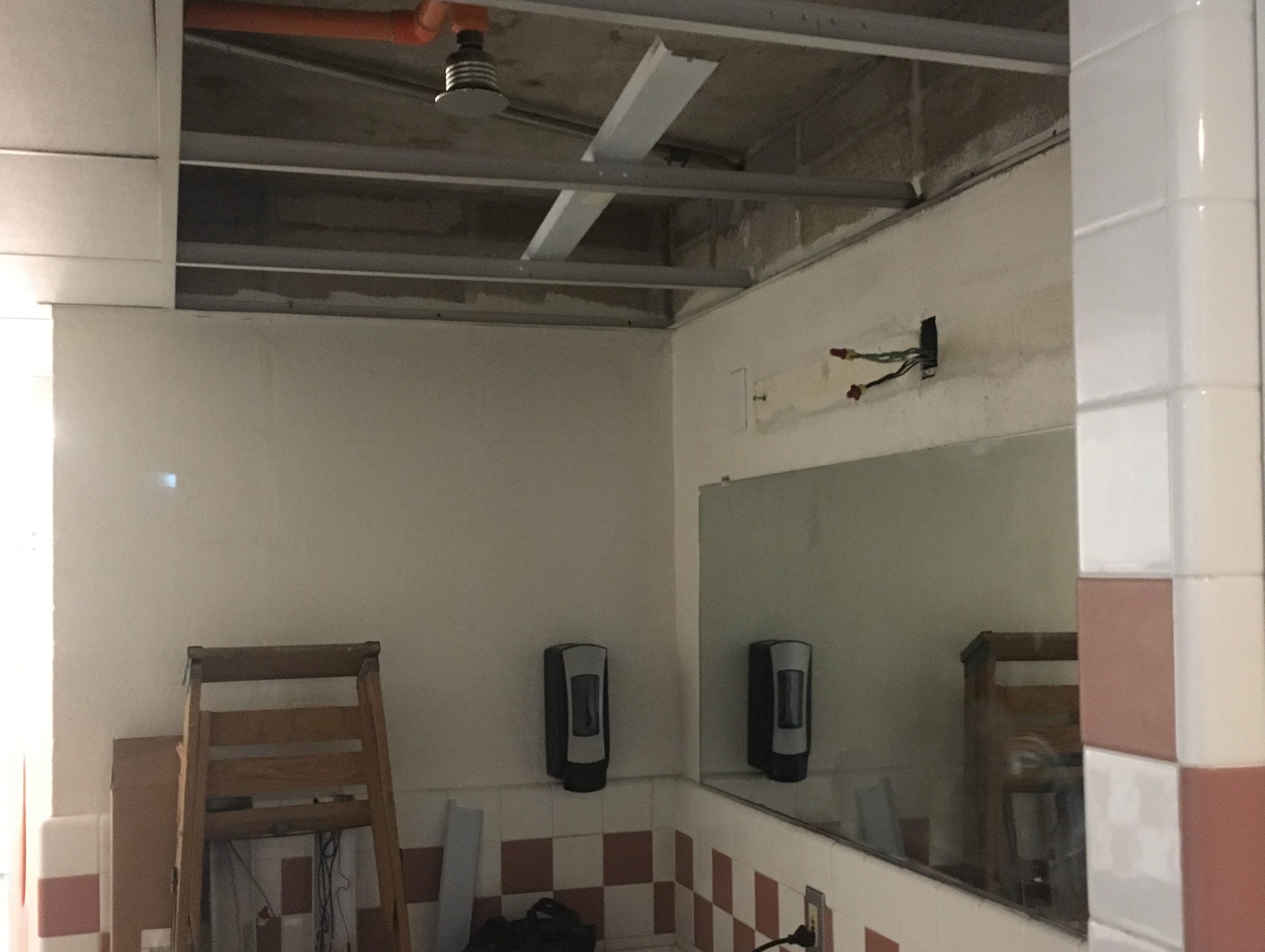 Students whose rooms were flooded by a fire sprinkler have returned to their dorms, but some rooms were left with lasting damage to property.

Last Friday, an electrical fire in the first floor women’s bathroom of Ruef Hall led to an early-morning frenzy as students fled the building. A single sprinkler in the bathroom responded to the electrical fire, but flooded the rooms of twenty residents in the process. Students stayed in housing across campus for the remainder of the weekend.

“There was a light fixture that overheated, and we believe the lamp became jarred,” Vice President for Finance and Administration and Treasurer Roger Demareski said. “It just happened to be right next to the sprinkler head.”

Resident of Ruef Mackenzie Sangster ’20 whose room was flooded said that the college told students to try to work through their own homeowners’ insurance to replace damaged items.

“Most of my stuff was washable, so I don’t really have to do anything about it,” she said, “but they told us to contact … our parents and ask about their homeowners insurance, and see if it would cover, but I do have some pairs of shoes that were expensive that my mom is going to try to contact through the school.”

When she got back to her room, grime was left on the floor, she said, but the problem was solved quickly and the rooms were cleaned.

“When we first came in the room they hadn’t cleaned [the floor] but then one of the janitors in Ruef came in and mopped the floors for us,” she said.

“It was kind of frustrating to be out of our rooms for the whole weekend and then come back to it uncleaned, so they fixed the problem and everything was fine,” she added.

With regards to the initial response to the incident, Director of Residence Life Grace Reynolds had high praise for the reaction of the college.

“The college acted quickly to minimize damage, offered students temporary reassignments, provided information and updates to students and their parents, and responded promptly to questions and concerns,” she wrote in an email. Several other faculty members hold similar judgements.

Some of the floor tiles in other rooms had detached partially from the floor, she said, and they had carpets placed over them to amend the problem.

“My RA’s floor and a few other girls on my floor had tiles that were coming up because of the heat and the fans that they did for the weekend so they’re having carpets being put in,” Sangster said.

Vice President of Campus Life Annette Diorio credited the sprinkler system for functioning “exactly as it should.” She added that the college took subsequent precautions to insure the stability of the building’s electrical systems.

“We had the whole building inspected by electricians,” she said. “[The electricians] inspected all the light fixtures and made sure that all the connections were good.”

According to Olivia Resnick ’20, whom the flood displaced for the weekend, the student’s concerns with reimbursement for damaged property has largely remained a mystery. Resnick wrote in an email that she is “not sure what is going on with compensation,” but believes “that is something that people will start to deal with now that we are allowed back in our rooms.”

Demareski said he had not yet heard of any requests for reimbursement on damaged property. In addition, he noted that the college does not “provide insurance for those things.”

“There’s no way for us to understand total value,” he said, “so we ask each individual to get their own renters insurance.”

“If they follow the policy, they have renter’s insurance for their belongings,” he said. “The college has responsibility for the building and furniture and public spaces, but I have not seen or heard a student request anything.”

Demareski shared the positive feedback the college has received, which mostly stemmed from their handling of the clean-up and adjustments. He said, “We’ve gotten compliments about the speed with which we cleaned up, the way we got students moving out and back. A mother wrote a very nice email thanking us and our custodial staff.”