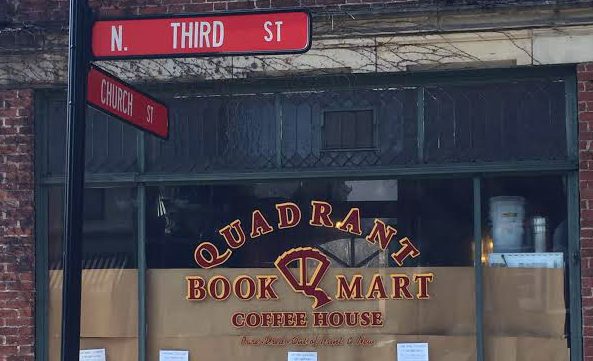 Quadrant has temporarily shut its doors (Photo by Courtney DeVita ’19).

For the cafe that smells of books just as much as it does breakfast, it was a tough start to the year when the heating system broke.

The owners of Quadrant Book Market & Coffee House said they had to close in the end of January because the building is over 170 years old and any renovation requires time. They took the opportunity to also fix some structural issues in the rear of the building as well as updating their electrical system.

Jo Moranville, co-owner of Quadrant and the driving force behind Easton’s Garlic Fest each year, is unsure of when Quadrant will be up and running but hopes to open by early March. There will be a fundraiser to help fund the maintenance updates sometime in the near future, which will be spearheaded by Kari Amanda at Sweet Girlz Bakery and Mike Pichetto at Third and Ferry Fish Market.

“We would love to show our community support and help save this treasured building and it’s owners who have spent countless hours contributing to all that is good in Easton,” Amanda writes on the GoFundMe page.

While she admits that being closed for a month has been difficult, Moranville feels humbled by the outpouring of love and support from the Easton and Lafayette College community.

“Easton’s community is such an amazing thing to be a part of. It is so filled with caring people who all pull together,” she said. “The community made what felt like a catastrophe feel like something that we will not only move on but come out stronger from.”

The love that the community has for this bookstore and coffee shop is apparent, with many donating users on GoFundMe commenting along with their donations.

“I love the Quadrant and am very, very happy to help them continue to help make Easton wonderful city that it is,” wrote one donor on the GoFundMe page. “No one does it better than the Quadrant.”

Lafayette parents have also appeared to have donated to the cause, according to other GoFundMe donation comments.

The Quadrant owners are already making plans for the future and hope to book Quadrant for “Breakfast for Dinner,” an event that would allow groups to have a private breakfast after-hours when the shop re-opens.