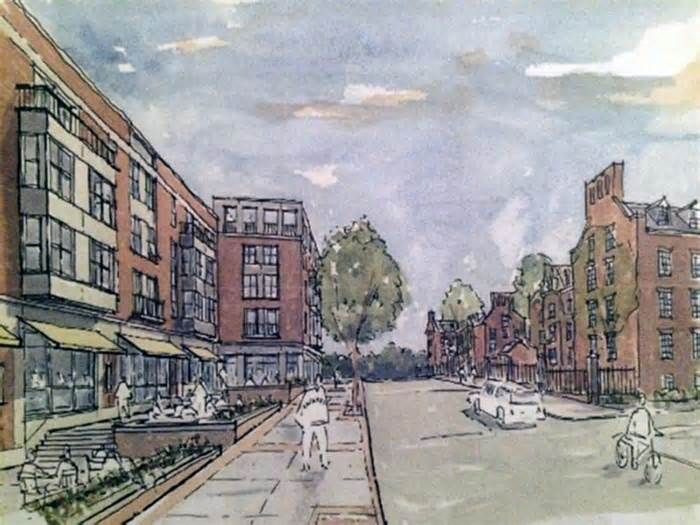 Conceptual watercolor sketches of the view from High Street down McCartney Street toward March Street. (Courtesy of the President’s Office)

Lafayette plans to expand the school and increase class sizes, but the residents of College Hill are more concerned about what might get destroyed in the process, according to Paul Felder, The Village on College Hill’s liaison to the college.

Last Wednesday, Feb. 1, the Easton Planning Commission decided along with the college to postpone a vote on changing the zoning laws to accommodate Lafayette’s expansion plans, which include building a new residence hall on McCartney Street, where Lafayette-owned homes currently stand.

According to Vice President of Finance Roger Demareski, they postponed the vote because the college requested additional time for the college and the surrounding community to further discuss the project and the issues it has raised.

Ultimately, the planning commission has no legal say in what happens. However, they make a recommendation to the Easton City Council who will vote in or after April on whether or not the zoning laws will be changed.

According to Felder, there are many concerns the College Hill residential community has regarding Lafayette’s plans. The Lehigh Valley Planning Commission, which recommended that Easton not approve Lafayette’s request, had similar concerns.

The first issue, Felder said, is that many of the houses Lafayette has purchased and plans on knocking down are historical buildings. College Hill also contains lower-value homes, and the neighborhood association fears that the college’s expansion could jeopardize these residences.

The third concern that the Lehigh Valley Planning Commission and the The Village on College Hill have is environmental, according to Felder. Currently, zoning laws require that properties have no more than 50 percent impervious coverage, the amount of ground coverage that prohibits the reabsorption of water into the ground. The school is requesting to change the limit from 50 percent to 85 percent impervious coverage, which brings up the problem of storm water runoff.

Two other concerns Demareski noted are the designs of the new residence halls and the possibility of exacerbating the parking shortage on College Hill, concerns which the college is partnering with the community to alleviate.

“We have worked closely with residents and their representatives on these issues,” Demareski wrote in an email. “For example, the proposed designs now include a pitched roof and other architectural features that will make the residence halls more aesthetically consistent with existing buildings. On parking, we have committed to having students who live in the new residence halls park on campus.”

But The Village on College Hill is mostly concerned with the quality of living for its residents and how Lafayette’s expansion could affect that. These potential zoning law changes also raise questions for the future of College Hill. According to Felder, the college owns at least 100 more homes than the association on College Hill and that they could decide to destroy and build on those at any time.

“We have a lot of concerns about this project, but the even greater concern is the future of the neighborhood,” Felder said.

These concerns and more led to the Easton Planning Commission to delay their vote until April. Byerly said that this delay is not concerning.

“These kinds of processes typically take multiple meetings and multiple efforts to work with the community and come up with a plan that everyone is enthusiastic about …We will continue to refine our plans and bring those back to the planning commission later this spring,” Byerly said.

According to Demareski, even with the delayed vote, the school remains on schedule and plans to open the first new dorms for the fall of 2019 and “looks forward to the next phase with the Planning Commission in early April.”

The meeting will take place April 5, at 6:30 p.m. at city hall, and is open to the public, according to Lafayette’s Director of Community Partnerships and member of the Easton Planning Commission Bonnie Winfield.