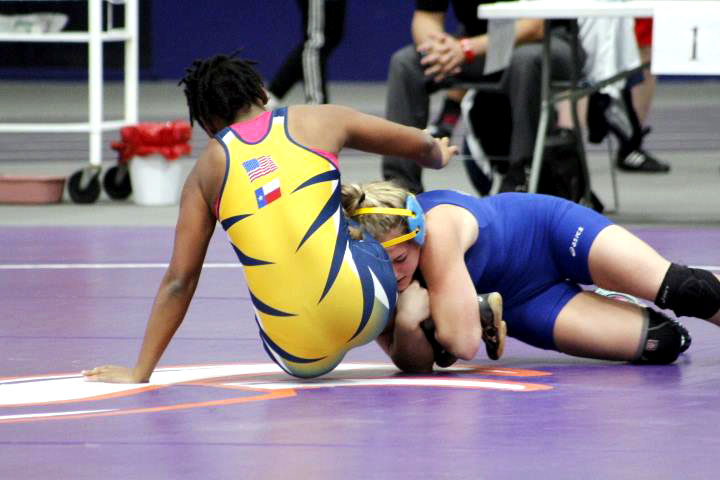 Skylar Grote ’20 in a wrestling competition. (Courtesy of Athletic Communications)

After both being heavily involved with the sport of wrestling prior to college, freshmen Skylar Grote and Hannah Koch said they hoped they could bring women’s wrestling to the Lafayette campus.

Upon applying, both Grote and Koch were reached out to by the wrestling club adviser, John Piper, who explained to the girls that he’d like them to help him establish a women’s wrestling club at Lafayette.

Wrestling was a tradition in Koch’s family, so she had spent much of her time in high school keeping statistics and managing the boy’s wrestling team. At one point during her senior year, she even became certified and took forfeits for a wrestler on her team.

With this background, Piper reached out to Grote and offered her a position as the women’s wrestling club president. In this role, she attends practice each day and is involved in all administrative and logistical tasks.

Grote began wrestling at the age of seven and has continued ever since. After wrestling on the best high school wrestling team in the country, she was happy to be able to continue wrestling at Lafayette.

She has been successful so far. In Grote’s first tournament, the Missouri Valley Open, she placed fifth. Then, she competed in the Bearcat Open in Illinois and finished in first place. Next, she will attend Nationals in Oklahoma, where she is seeded sixth in the 143lb weight class.

Her goal is to place in the top eight, which would name her an All-American.

“I feel confident because I’ve just won the last tournament and they finally seeded me in the country,” Grote said.

Following that tournament, though still considered a junior in the wrestling world, she will attend the Senior World Team Trials in April.

In addition to her training with the Lafayette club, Grote also trains at the Buxton School of Wrestling in Randolph, N.J. She also runs a wrestling club for young girls in Easton once a week.

In the long-term goal, Grote said she hopes to wrestle in the Olympics.

While pursuing her own aspirations, Grote is hoping to attract others, even those with no experience, to join the club. Currently there are 10 members, five of which attend practice everyday in Forks Township. In the future, they are also hoping to develop a weight lifting part of the club.

“The men’s and women’s programs could both use more people,” Koch said.

“I think people are deterred because they’ve never wrestled before,” Grote added. “There’s a woman named Kelsey Campbell and she didn’t start wrestling until she was 18 and she went to the Olympics. So it’s never too late to start.”