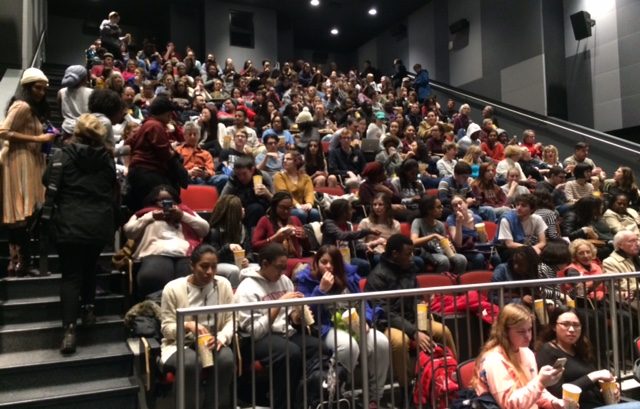 Many students may not know their professors outside the classroom, much less what their favorite movies are. But that changed with the “Faculty Favorites” film series, in which each week until May 2 a faculty member will showcase a movie of their choice.

The critically-acclaimed, award-winning film “Moonlight” kicked off the series on Tuesday at Buck Hall’s Landis Cinema Theatre. It tells the story of an African-American boy as he journeys from childhood into adolescence. The story culminates in his adulthood as he attempts to grapple with poverty, drugs, addiction and his own burgeoning sexuality in modern-day Miami.

The purpose for the film series was to nurture a community of people who love and study media, as well as to use the state-of-the-art Landis Cinema as a meeting place in the Easton community, according to one of the series coordinators, film and media studies (FAMS) professor Andy Smith. Before the opening of Buck Hall and the Landis Cinema, FAMS faculty were discussing potential ways to use the space in a productive and engaging manner.

Two separate group conversations about ideas merged together and decided to start the film series, according to Smith. The film series’ coordinators include FAMS professors Katherine Groo, Adam MacHose, Nandini Sikand and Smith, as well as Cindy Notaroberto, the FAMS administrative assistant. The coordinators are already fielding interest and receiving film suggestions from faculty. If the film series proves popular, it will continue again in the fall semester of 2017, according to Smith.

The films being showcased span 11 different academic departments, seven different countries and six decades. The films include everything from a current Oscar contender for Best Picture, a cult documentary, a revisionist Western and a zombie apocalypse film.

The schedule for the rest of the series is as follows, according to the series’ Calendar of Events page.

Feb. 14: “Aguirre, The Wrath of God” presented by Director of Community-based Teaching Jim Toia of the art department.

Apr. 18: “Battle of Algiers” presented by professor Rachel Goshgarian of the history department.

Apr. 25: “Train to Busan” presented by professor David Shulman of the anthropology and sociology department.

May 2: “The Fits” and “Lemonade” presented by the FAMS department.