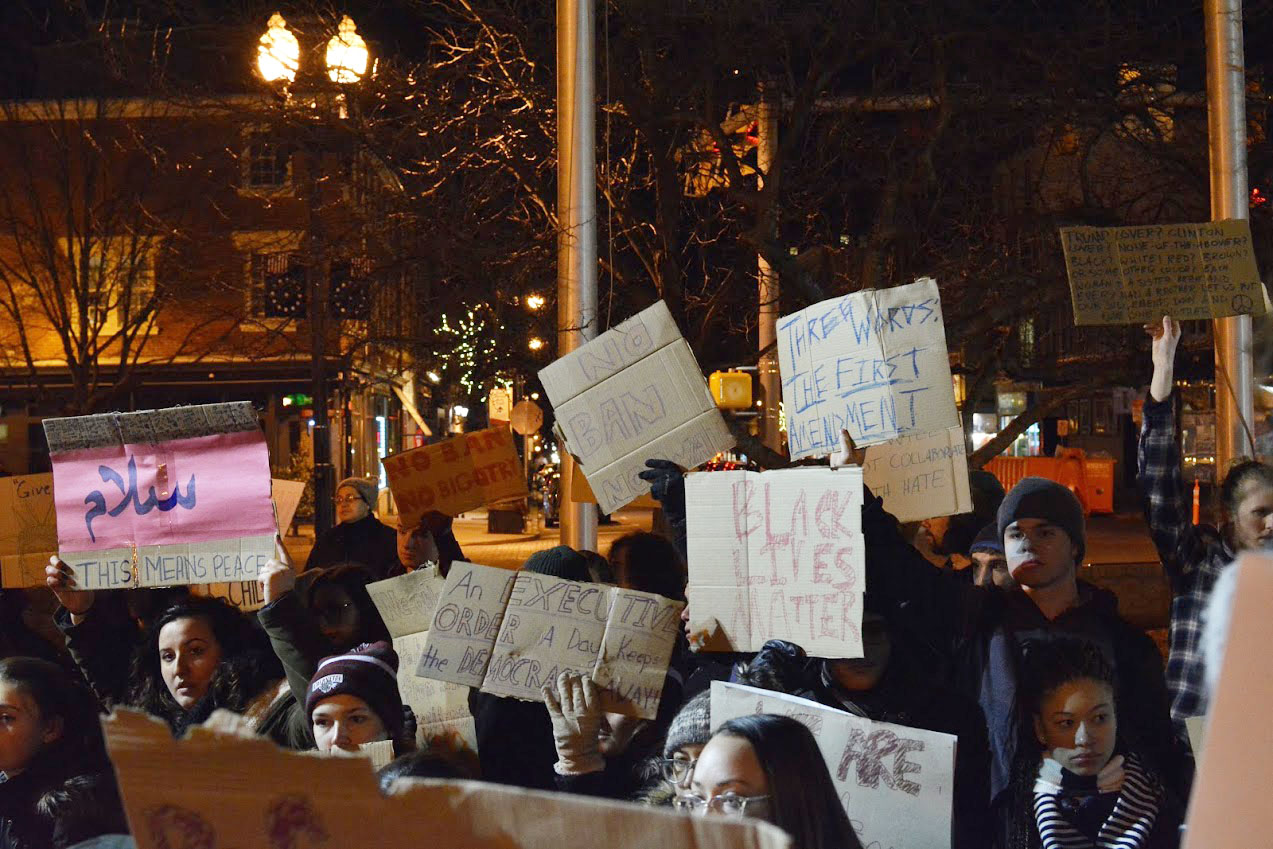 Easton protest against the immigration ban on Monday. (Photo by Courtney DeVita ’19)

Hundreds of people gathered last Saturday for an open house at Islamic Center of Muslim Association of the Lehigh Valley. Food was served from several Muslim cultures. When a call to prayer occurred during their visit, members of the association allowed them to stay in the prayer hall.

“It was very powerful to sit in this room with people, to support them praying and to have them sort of trust us to be there and to want to show us how they understand and practice Islam,” professor Jessica Carr said, who took five students to the event.

It wasn’t until she got home that she heard the news. Under President Donald Trump’s executive order on immigration, people from Muslim-majority countries were detained at airports, others were barred from entry into the United States and protests erupted across the country.

“Just the experience of being around people who were so welcoming, and then to go home and read about such discrimination was just such dissonance for me,” said Carr, who teaches religious studies.

She took action, both by signing a petition against the executive order and participating in a rally at Centre Square in Easton.

Carr is one of more than 60 Lafayette faculty members, including President Alison Byerly, who signed the petition condemning Trump’s executive order banning people from seven Muslim-majority countries from entering the United States. At press time, the petition has more than 27,000 signatures.

This petition marks Byerly’s fifth signed statement against policies and values that may be under threat with Trump’s administration. Echoing her earlier comments, she wrote in an email that she sees the petition as “a statement of values, not about a political candidate or party.”

The petition directly mentions Trump, and two of the other statements she signed are addressed to him. Another is addressed to Pennsylvania senators Pat Toomey and Bob Casey, Jr.

Kamini Masood ’19, who is from Pakistan and has a student visa, was one of those students. Although Pakistan is not one of the seven countries “of Particular Concern” listed in the order, she is worried about traveling after reports that Pakistanis were detained at the O’Hare International Airport in Chicago.

Because of the order, she said her plans to travel to Russia for one of her classes at the end of the semester were upended. She also wanted to go home toward the end of the summer, but now she said she will probably stay on campus.

Masood went to the rally, because she said she feels like protesting is one of her only forms of political agency in the United States. She doesn’t have a representative to call or a vote to cast. Yet the order still made her afraid to leave the country, she said, along with other members of the international community at Lafayette from Muslim-majority countries.

“I realized, because I have no political agency as an international student, the least I can do is go to this rally,” Masood said. “Because I really can’t call anybody, I can’t do anything about this, aside from going and saying, ‘This is unfair.'”

At least four Trump supporters were at the rally, too, including one wearing all black and holding an American flag who shouted “Trump” behind Mayor Sal Panto during his opening remarks supporting the rally. The driver of a car covered with Trump banners circled Centre Square in the beginning of the rally, honking intermittently.

Also among the protesters against the executive order at the rally was professor of Middle Eastern history Rachel Goshgarian. On top of that, she signed the same petition as other Lafayette faculty members and Byerly. One of the reasons for being against the order, the petition reads, is that it “significantly damages American leadership in higher education and research.”

Goshgarian sees this in her field of study. A Syrian friend of hers is doing research in Istanbul, she said, for his Ph.D. program at a college in New York City. After the immigration ban, she said he doesn’t know what to do when he runs out of funding for his research. Other people she knows have similar stories, she said, and it creates a disparity of who can travel for research in her field.

“It’s as if the carpet has been ripped out from under their feet,” she said.