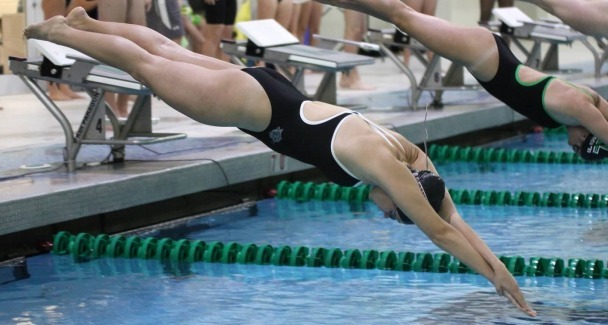 A member of the women’s swim team dives into the pool (Courtesy of Athletic Communications).

In their final meet of the season before the Patriot League Championships, the Leopards’ swimming and diving team traveled to Lewisburg last Saturday to compete in the Bison Invitational.

But it was junior Nick Whiteman who stole the show for the Leopards, posting their top overall finish on the day placing third in the 1650 freestyle with a time of 17:21.79. He was trailed by two other Leopards, Ryan Moore, who placed sixth and freshman Mitchell Cairns, who grabbed seventh place.

Sophomore James Grieb placed seventh in the 200 IM and tenth in the 100 breast – a very solid outing for the underclassman. Senior Issaiah Coldren placed fourth in the one meter and three meter contests in the swimming and diving portion of the invitational. In the 50 free, the final event of the meet, senior Russell Lambert and sophomore Dylan Wasilnak posted sixth and eighth place, respectively, bringing the Leopards’ solid meeting to an end.

The women’s team also traveled Bucknell on Saturday and it was sophomore Sarah Rosenthal that posted the top individual performance for the Leopards, with a sixth place finish in the 200 butterfly. Freshman Emily Benson and senior Stephanie Nickerson grabbed the eighth and ninth spots in the 400 IM. Sophomore Faye Melekos rounded out the day for the women, placing 10th in the 50 free.

In two weeks, the Leopards are going to begin preparation with the Patriot League Championships. The team has a good mix of new and experienced swimmers who they will look to during the upcoming championships. Lafayette’s men will look towards their four core swimmers, Bryce Currie, Sam Haines, Xavier Laracuente and Kyle Doherty to give them a spark as they travel back to Bucknell on Feb. 15. The women are also graced with eight seniors on the roster who look to guide the Leopards to a successful outing.

The Leopards returned to action in November of last year in the brand new Weinstein Natatorium, which opened on on Homecoming weekend. It was an incredible multi-million dollar donation from the Weinstein family with hopes to bolster Lafayette’s swimming and diving teams of the future. The process has certainly begun as the Leopards have attracted 12 freshmen to the 2016-17 roster. With underclassmen that are contributing, the swim team may have a lot to look forward to in the future.