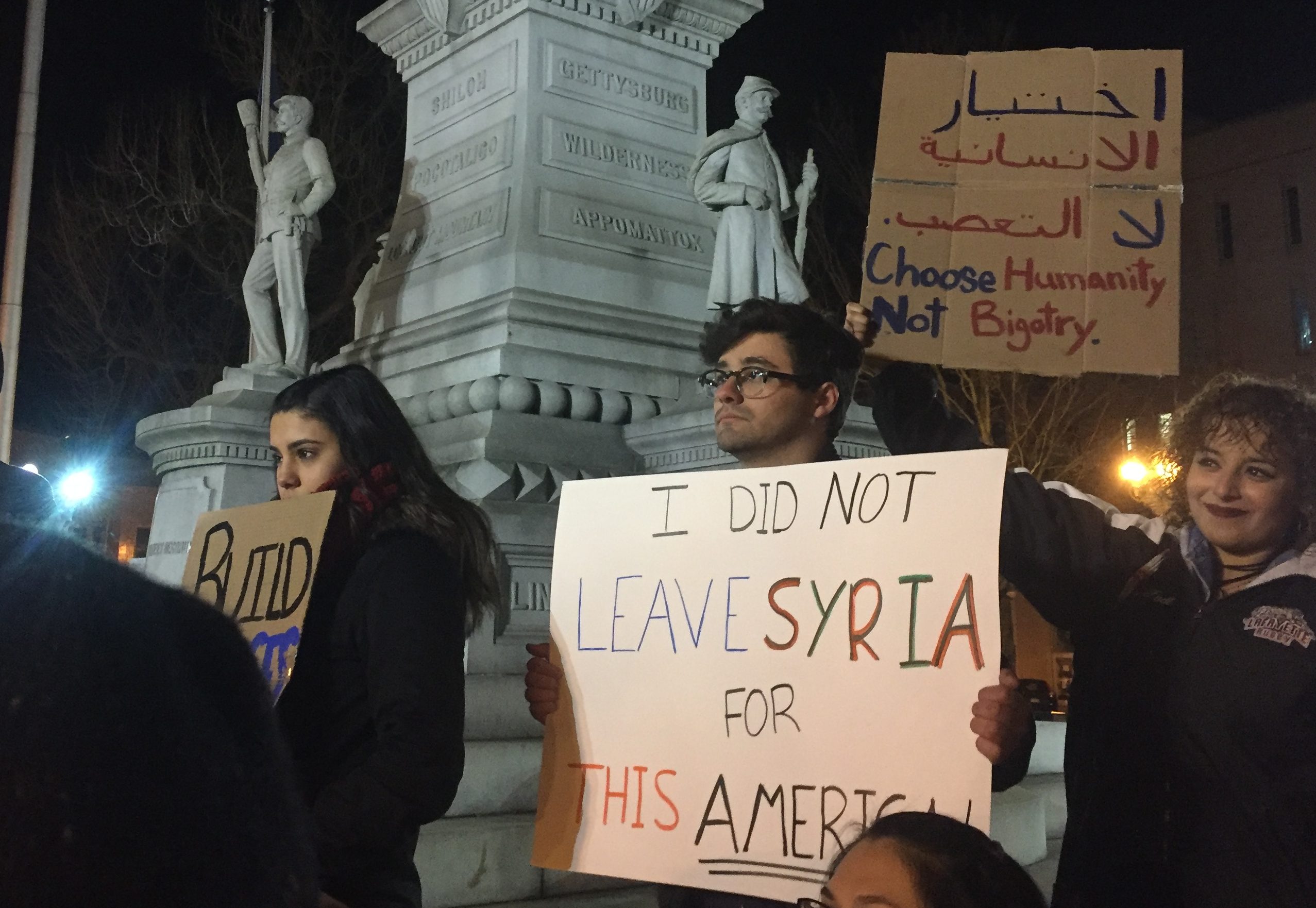 Alex Homsi at the rally in Easton against President Trump’s immigration ban on January 30, 2016. (Photo by Ian Morse ’17)

One of Donald Trump’s first acts as president has hit uncomfortably close to home for at least two Lafayette students, but neither want to believe the place where they’ve lived, made friends and taken college classes has turned on them.

A week ago, Maria Ahmed ’20 was excited to fly back to her family this summer, after being away for two years, and celebrate the end of her first year of college.

Last Friday, in an executive order, the White House put her country on a list of seven countries “of Particular Concern” whose citizens are restricted from crossing U.S. borders for 90 days. Ahmed is scared that may extend further for her home, Somaliland, a country without international recognition in north Somalia.

“I don’t want to take a chance on my education and leave, if that means I won’t be able to come back to Lafayette,” Ahmed said. She canceled her trip and is looking for other options over the summer.

Alex Homsi ’19 had planned to make two trips this summer. After a community service trip to Jamaica with his fraternity Delta Upsilon, he was to fly to Germany to meet his newborn brother for the first time. But if he went, Homsi’s Syrian and Bulgarian passports would prevent him from returning under the executive order.

Although Homsi has permanent residence, or a green card, the announcement a few days later that he would be allowed to return didn’t restore much faith.

“My plans are on hold because I want to see the story unfold,” said Homsi, a mechanical engineering major. If he does travel, he said he won’t conceal his nationality.

“If I come back and the immigration officer asks,” Homsi said, “I’m not going to be like, ‘Well, I’m Bulgarian too…’ No, I am Syrian. I don’t feel like it’s something I want to hide, because there’s nothing wrong with it.”

“I feel very blessed and lucky, to have this dual citizenship, to have a green card,” Homsi continued. “Life went right for me, but it didn’t for a lot of people, for my parents, for people I really love.”

Homsi’s mother is not as lucky. She may have trouble helping his stepsister settle into college next year if she can’t enter.

The list of banned countries also included Iraq, Iran, Sudan, Yemen and Libya. In 2016, there were about 17,000 students registered in the U.S. from these countries. Citizens of these countries receiving acceptance letters from U.S. colleges may experience trouble obtaining student visas.

For both Ahmed and Homsi, the immigration ban from Jan. 27 flipped their view of the U.S. upside down, but they don’t want to assume the U.S. wants to ban Muslims.

“America was advertised to be a place of acceptance,” Homsi said, “like no matter where you come from, we’re not going to judge you based upon something that was forced on you, like religion for example, but more like you are what you do.”

Homsi rejected the label “Muslim Ban,” a phrase many have used to describe the order. He and his mother are both Christians by birth, but face the same bureaucratic brick wall as the rest of their country. Under the immigration ban, Christians will be prioritized only when the refugee system begins again after a 120-day suspension.

Ahmed, an undecided international affairs or economics major, attended a high school in Massachusetts for three years before her first class at Lafayette, and her current visa took three months to receive. Ahmed said her mother in Somaliland is constantly worrying.

“Two weeks ago everybody was telling me, ‘He’s not going to do all of that,'” Ahmed said. “And now it happened, and I’m like, ‘Is it going to be only 90 days?’ or am I going to be stuck here for four years at least?’”

“I kept wondering why those seven countries,” she added, “and why not those countries that threats were coming from, and I don’t want to make the conclusion that it’s based on religion.

“I want to find a rationale, but I just can’t.”

For Homsi, the protests around the country have left him conflicted, because he said the country has given him so much, but he said he can’t escape the news.

“The reason I want to protest is that others are affected, others that I’m closely related to,” Homsi said, adding that a close friend from Syria at a nearby college only has a student visa. Homsi’s poster at the rally in Easton on Monday read, “I didn’t leave Syria for this America.”

Other students from Muslim-dominated countries are similarly left in fearful uncertainty. Noureen Abdelrahman ’18 heard about the ban, but her country, Egypt, wasn’t included. So she continued with her plans to travel out of the country.

Then an Egyptian friend pursuing a Ph.D. in the U.S. was refused a visa and barred from leaving Cairo. For her, the risk of traveling is too great.

Hagar Kenawy ’17, from an Egyptian family, believed the risk of being detained at an airport is greater as a result of profiling.

“I’m American, but I feel like [the ban] is definitely going to affect domestic and international travel,” she said. “Especially if you look Muslim, you’ll just get more trouble.”

Lafayette responded to student concerns in a meeting held Monday night, in which students could express concerns to Provost Abu Rizvi and Chaplain Alex Hendrickson. Rizvi said he would explore the college’s options on supporting those affected, including hosting talks from experts on immigration, in addition to possible financial assistance.

President Alison Byerly confirmed that the college is developing plans to assist affected students.  She has signed five statements supporting and reinforcing values that she said she believes may be threatened by the Trump administration.