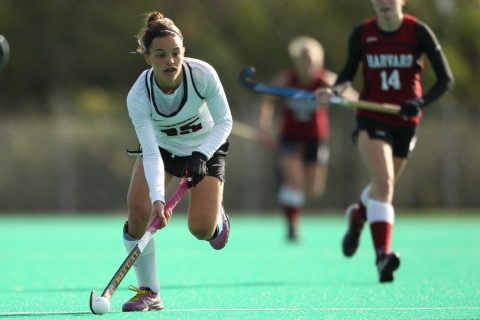 After what many would call a stellar career at Lafayette, where she led the team in goals in both her junior and senior seasons, senior captain Amanda Magadan has been named to the U.S. Women’s National Field Hockey team. She becomes the first field hockey player in Lafayette history to make a national team.

This selection comes for Magadan at the conclusion of an impressive career on the U.S. U-21 National Team. The midfielder competed in the Pan-American Junior Championships in Trinidad and Tobago, the Field Hockey Junior World Cup in Chile and in a friendly match in Holland. She also played in series against Great Britain and Canada at the U.S. Training Center and in games versus Japan, India and Chile.

Following her performance on the U.S. U-21 National Team, Magadan was selected as one of the three additions to the U.S. Women’s National Team made this January.

Despite the success she has experienced along the way, Magadan was not always sure about her future as a field hockey player. In high school, she was considering playing softball in college rather than field hockey.

“I played softball for so many years that [field hockey] was something different and the speed of the game was faster, which I enjoyed,” Magadan said. “I also decided to play field hockey at Lafayette because it was an opportunity to join a strong program at a school with superb academics.”

She has found success in that endeavor. During her four years at Lafayette, Magadan scored 24 goals, four of which were game winning goals. She also tabbed nine assists to total 57 points. The character she displayed her freshman year in particular led her coaches to suggest she attend a tryout for the U.S. High Performance Team.

“At the highest level, a significant amount of success comes from who the athlete is, rather than what the athlete can do,” head field hockey coach Jennifer Stone wrote in an email. “Amanda is determined, a competitor, and has a contagious enthusiasm to relentlessly improve. Those are the reasons why I encouraged Amanda to start her path down the USA pipeline.”

Although she had never previously considered joining the national program, Magadan decided to take the opportunity to better her skills.

From her performance on the U.S. High Performance Team, she was selected to U.S. U-21 National Team where she spent her summers training and competing at the international level. Following her performance in the Hockey Junior World Cup, where she scored a goal in a win against Zimbabwe, she was selected to join the U.S. Women’s National Team, the top team in the U.S. Program. This makes her one of the top 27 field hockey players in the country. Many members of the team competed at the Olympic Games in Rio this past summer.

Magadan will spend her final spring semester traveling back and forth to Lancaster, Penn., the site of the U.S. Women’s Training Center, to begin training while completing her education at Lafayette. After graduation, she will move to Lancaster and begin training with the team full-time.

Her first goal is to adapt to the higher level of play. She may be asked to learn a new position as a defender, a position she has never played before. This will be an added challenge as she assimilates to field hockey at a new level.

“I’m looking forward to the opportunities that will come with being a member of the U.S. team,” Magadan said.

“Amanda will always be a Leopard…We are beyond proud of who she is, what she represents, and how she will represent Lafayette and America on the international stage,” Stone wrote in an email.