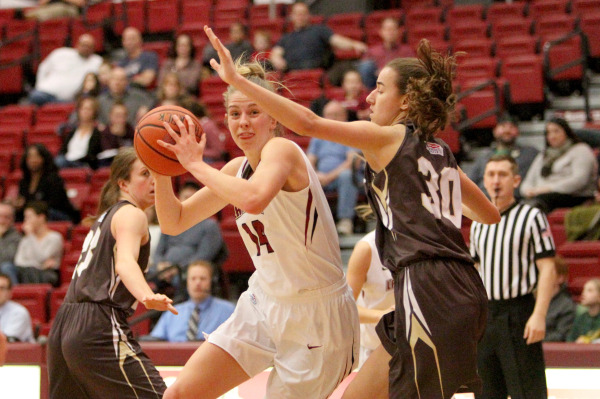 The Leopards’ struggles continued over the winter break as they have lost 19 straight games, dropping their most recent game to rival Lehigh in a tough three-point loss. The Leopards have dropped to 0-8 in Patriot League play and hold a 1-19 record on the season, winning solely their opening game against LaSalle in November.

In the 90th installment of the women’s basketball rivalry between Lafayette and Lehigh, it was the Mountain Hawks who held onto a three point margin to notch their only Patriot League victory of the season. It is clear that the issue for the Leopards was holding onto the basketball and protecting possession as they committed 16 turnovers in the game. The Mountain Hawks also had their fair share of turnovers (14), but the Leopards were unable to capitalize, scoring only three points off of turnovers to Lehigh’s 18. A few more buckets following steals may have given Lafayette their first conference win of the season.

This game proves to be especially frustrating for the Leopards as they dominated in almost every category. Lafayette’s bench produced 24 points, helping the women stay in the game and giving them a chance to grab the win.

The Leopards once again turned to junior Sammy Stipa to lead the team in scoring down the stretch, dropping 13 points and leading the game with 39 minutes played. Stipa has been a reliable source of offense for the women throughout the season and her three point shooting has been proved essential for the struggling Leopards.

Stipa exhibited her offensive abilities in the third quarter of the game sinking three shots and a crucial three pointer to bring the game within two points, 43-41. Coming out of a media timeout, the Mountain Hawks drained two consecutive threes to give Lehigh a seven point lead midway through the fourth.

The Leopards remained resilient and brought the game within one, courtesy of another Stipa three and two timely foul shots from freshman Sarah Agnello. Lehigh drained two free throws to regain a three point lead, and a three from Agnello fell short of the rim. The Leopards fouled once again and after two Lehigh misses at the stripe, Stipa was forced to take a difficult turnaround three that banged off the iron.

The women spread the scoring out with six players scoring six or more points. However, it will be hard to see much success in the remaining games if the Leopards continue to shoot 23.8 percent from beyond the arc and 61 percent from the free throw line. The Leopards held their own on the glass notching 42 rebounds on the night and seven blocks – six of which came from senior Harriet Ottewill-Soulsby, a career high.

The Leopards return to action on Jan. 28 in Baltimore as they take on the Greyhounds of Loyola in a Patriot League tilt.