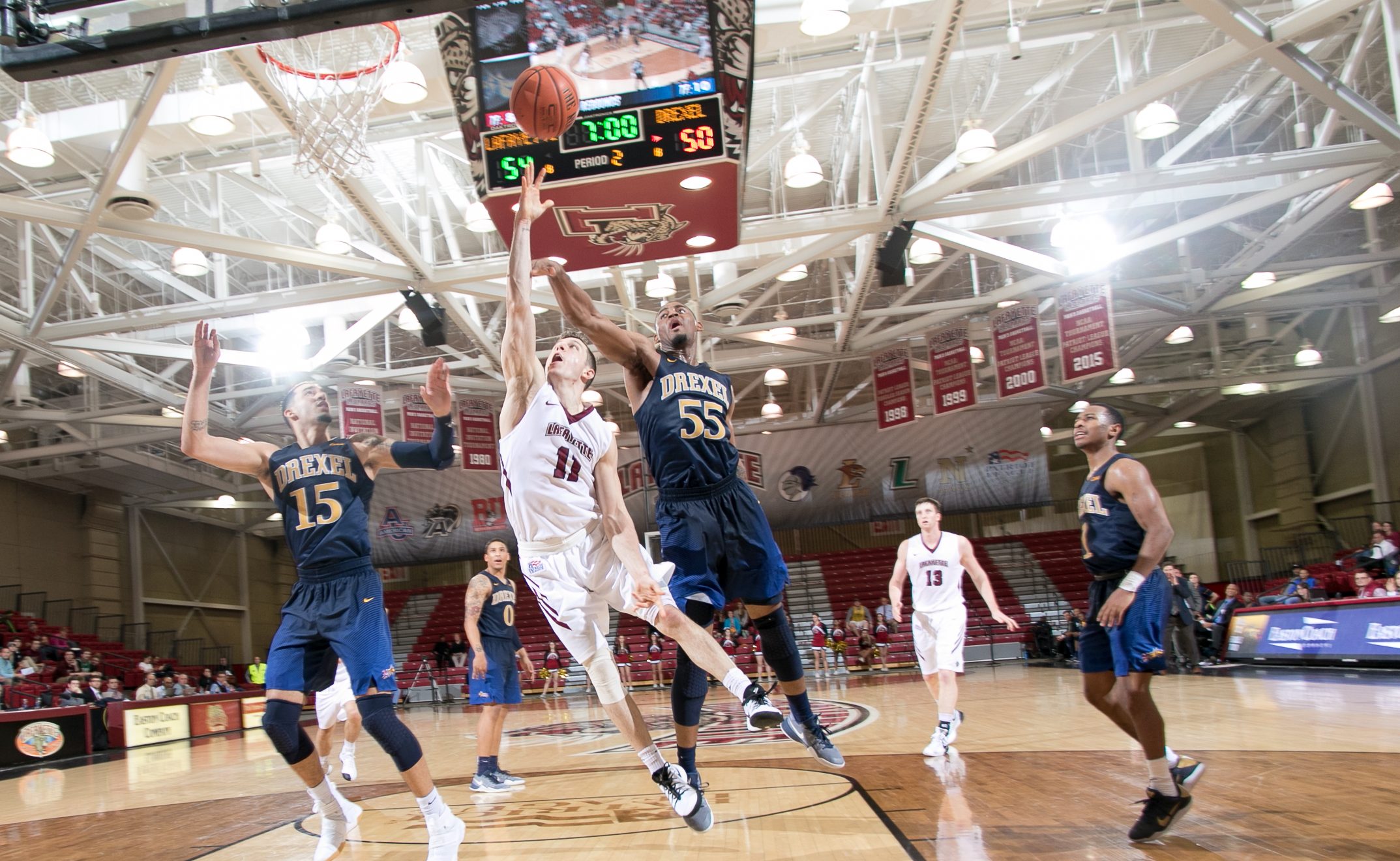 Nick Linder takes it to the hole. (Photo by Hana Isihara ’17)

The seesaw start to the men’s basketball team’s season continued as they went 1-2 during the week.

The Leopards came out in full force against Drexel last Wednesday night in the Kirby Sports Center. They picked the correct shots to take and successfully put them away and picked up the rebounds when most needed. After dominating the Dragons through the first half, Lafayette carried a 38-24 lead into halftime.

During the second half, Drexel out-rebounded Lafayette 21-15 and pulled within one point with just over five minutes to play. The Leopards fought back to expand the lead to seven at 62-55, but the Dragons took over from there and took their first lead with 48 seconds left on clock.

Drexel finished out that last minute victoriously, with the final score line reading 74-70 in their favor.

The Leopards were back in action Monday night in Brooklyn against St. Francis in the Terriers’ first home game of the season. The team switched their game plan away from three pointers, only attempting 13, and instead focused much more on getting the ball to the post. This tactic successfully involved all five players on offense and generated a flow that was difficult for Terriers to defend.

Lafayette took a 38-35 lead at half and tried to limit St. Francis’ opportunities to begin the second half.

“We knew they were going to come out hot and shooting really well, which they did in the first half,” junior Matt Klinewski said. “We eventually got them to cool off and it worked out to our advantage.”

The Leopards held the Terriers off in the second half and defeated St. Francis, 74-72.

Klinewski was the star of the show, tallying a career-high 30 points in the game, the highest for any Leopard since Lindner’s 30 points two years ago. Klinewski scored on all eight of his free throws, recorded a team-high nine rebounds and avoided any serious foul trouble.

Freshman Kyle Stout went 5-9 on the floor for his own career-high of 12 points in the game. Sophomore Auston Evans was the third Leopard to achieve double-digit scoring with a career-high 10 points.

According to Klinewski, fans can expect a lot of the future games to come down to the wire like the one at St. Francis.

“The teams we are playing are all Division I teams and all of them are going to bring it every time they step onto the floor, so every time we step onto it we have to bring our best game,” he said.

On Wednesday night, the Leopards traveled to Philadelphia to take on Penn. Unlike their last few games, this one was not close as the Quakers got out to a nine point lead at halftime and won by a score of 80-52, dropping the Leopards’ record to 3-5 on the season.

The Leopards will return home this Saturday to take on Sacred Heart and look to get back in the winning column.