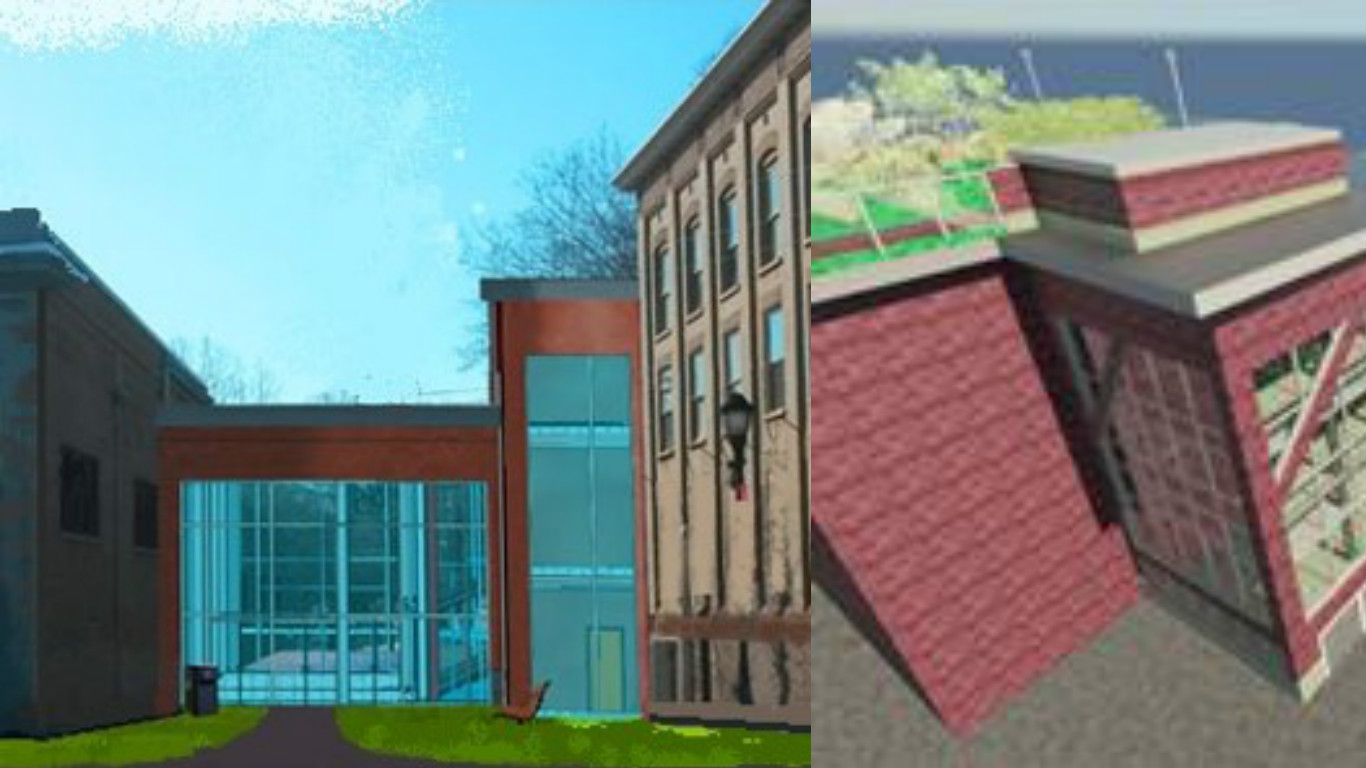 Graphic of landing of inclined elevator idea. (Courtesy of the Class of 2015 Civil and Environmental Engineering Department Majors)

Lafayette College announced Tuesday that the plans for building an elevator between campus and downtown Easton have come $1.5 million closer to its $9.6-million reality.

The commonwealth of Pennsylvania awarded Lafayette a grant from the state’s pool devoted to annual economic development projects. Lafayette applied for about $3 million in funding and presented before the state government about a month ago.

The project, deemed the “Easton Skyway,” is still in its early stages of planning and will not happen at all if Lafayette cannot secure about half of funding through grants before beginning, according to Vice President for Finance and Administration Roger Demareski.

“If we don’t get any more grant funding, then we won’t do it,” Deamreski said. “We’re depending on at least $4 or $4.5 million from outside agencies.”

Both Demareski and Panto have said that Lafayette has not approached Easton for funding for the skyway.

“When you look at the other great things the city is trying to do … we would want them to focus on those things,” Demareski said.

Easton Mayor Sal Panto said in an interview with The Lafayette in October that the skyway was a “waste of money,” but added to that on Wednesday.

“What I said was that maybe there’s a better way of making the project by putting a residence hall there,” Panto said. “All I was saying was if you put a residence hall, you put an elevator up ten stories, and then you just walk across.”

Panto added that the city does not have money for economic development projects, like the skyway. Panto also said in the October interview that few Easton residents would want to use the skyway because it opens into an inconvenient spot on campus.

“If we get to our goal,” Demareski said, “then ultimately we’ll build the project the tech clinic 12 years ago started.”

While we think that it is a laudable goal to find a way (besides shuttles) to connect the Arts campus with the Main campus, it should be pointed out that the Tech Clinic concluded that a funicular-style conveyance would be the best option. One of the arguments presented against a funicular concerns having to remove too many trees. We would suggest that the elevator column will be a tremendous eyesore rising between the creek and hill slope that would, in fact, hide many trees behind the vertical column and would probably result in the removal of trees as well. While a path for a funicular would have to be cut through the trees, the feature would retain forested slopes on either side that might eventually form a partial canopy over the rails. We would urge reconsideration of the decision to construct an elevator tower in favor of a comprehensive and careful evaluation of alternatives, including an inclined funicular.

Prof. Malinconico and Prof. Germanoski, I’m guessing the inclined rail might even be cheaper, compared to an elevator – given that all structures would be fixed at the base. Did the Tech Clinic have any estimates on the costs of the different systems, initial and running costs?

re: The proposed elevator to link Lafayette’s Art Campus with the main campus. Lafayette College and the City of Easton, Pennsylvania have an opportunity to research and ultimately construct the correct system. I suggest a national design competition inviting proposals for what could become not only a convenient and practical solution to a very real problem but also an example of excellence in environmental planning and design. The visual impact on the Lafayette campus as well as the Easton Historic District, National Register of Historic Places, Department of the Interior, should be enough motivation to insure sensitive design. For example: Otis Elevator is a global company with Green options and state-of-the-art technology. As an engineering school, Lafayette must lead the way. The final design, when built, will become an iconic attraction of interest to visitors from around the world.

State support of an elevator ($1.5) cannot be justified in any way, given the real needs of Easton proper. For too long, grant money has flowed to Downtown enrichment to the benefit of developers and the upper classes even as sore needs in greater Easton — education, affordable housing and adequate food supplies — go neglected. Have mercy.