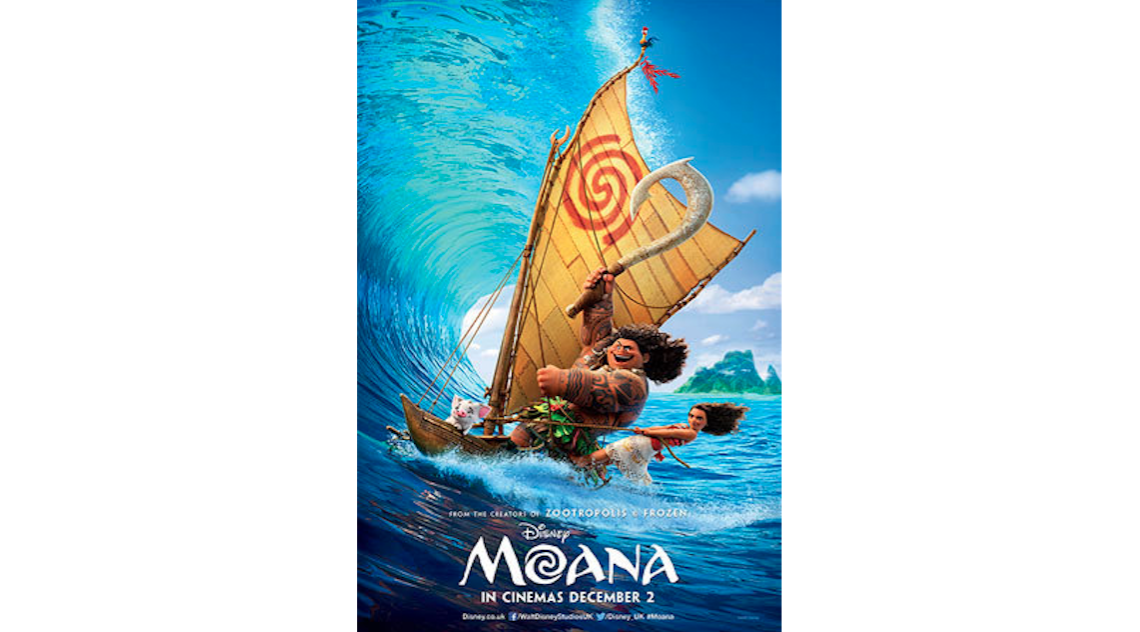 I guess it was just due time before Dwayne “The Rock” Johnson would be featured in a Disney princess movie. In the new blockbuster, “Moana,” Johnson is featured as the voice of the animated co-star, Maui.

“Moana” co-stars Auli’i Cravalho as the voice of Moana, the future chief of the Polynesian village Motu Nui. Against her father’s wishes, she ventures out to sea to find the demigod Maui and make him return the heart of Te Fiti. It’s not very complicated. However, I don’t think I would call “Moana” a Disney princess movie.

I’ll say the highlights of “Moana” are definitely the visuals and the music. As expected, Disney’s recent release is an incredible example of masterful animation. The movie is filled with bright and beautiful colors that fill you with a happy and warm feeling. The music is also another selling point expected in a Disney film. The beautiful and fun score by Opetaia Foa’i, Mark Mancina and Lin Manuel Miranda of “Hamilton,” is something you will find yourself listening to when you need inspiration or want to have a good time.

The strong characterization of both Moana and Maui is also to be expected for a soon-to-be Disney classic. Disney does a great job developing both of their personalities and Moana’s tenacity and bravery make her a great role model.

My issues with the movie come into play with the storyline. I found parts of the story to be a little lackluster. I wasn’t entirely sold on the relationship between Moana and Maui, which was okay at best. Their journey is incredibly Paint- by-Numbers, predictable and not surprising.

For me, “Moana” was lacking a strong message — unlike “Zootopia,” another Disney hit released earlier this year. “Frozen” is yet another example of a Disney hit film who’s footsteps “Moana” must follow. There are even some similarities in “Moana” that seem to be drawn directly from “Frozen.” For example, “Frozen” includes rock trolls while “Moana” features coconut trolls. Additionally, kooky but lovable sidekick Olaf from “Frozen” is suspiciously similar to this film’s very empty and unintelligent sidekick Hay-Hay. Despite these comparisons, “Moana” ends up falling short of the praise deserved by “Frozen.” It’s still an enjoyable film but doesn’t entirely hold up to the recent and historical work of Disney.

I never saw what the big deal was over Frozen. I’d see Zootopia any day over it and consider that there are plenty of animations that were better. Obviously I am in the minority though.

While Zootopia will be remembered as one of 2016’s greatest films for generations to come Moana will be quickly forgotten once the new wears off.

I pretty much agree with you guys. Moana was a fine movie but nothing spectacular. The storyline and characters felt…I hate to say generic… maybe just average. I can’t really put my finger on it but there just wasn’t enough of a new/interesting flavor to them. The songs were nice enough. Animation pretty to look at. But characters and story are the most important parts and I wasn’t really wowed.
(And what annoys me is hearing things like, “Omg Moana is proof you don’t need a male white lead to be a hit) uhhhh…wtf??? Like if friggin Moana is the first of its kind. Even in the Disney Canon it’s not the first. Smh. People…

Comparing Hay-Hay to Olaf? Now, aren’t you trying too hard to find similarities to Frozen?

Totally agree. It was disappointing since I make it a point to keep up with Disney movies, I was anticipating for some really inspirational message and a thrilling and compelling story, but it was pretty boring. I love Disney a lot, but this movie wasn’t in the league of other Disney movies.