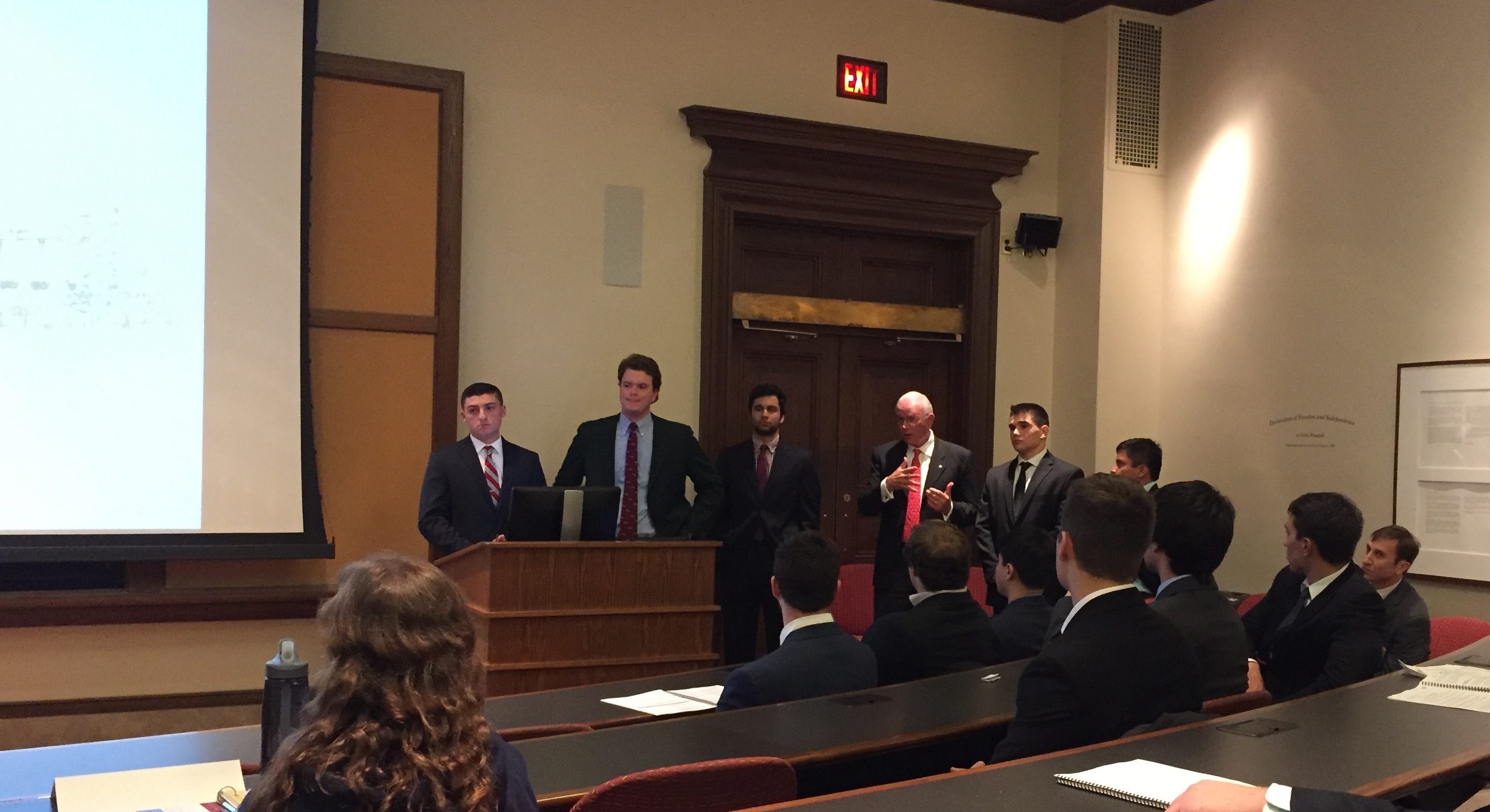 Chi Phi members make their presentation to become a colony

After 12 years out in the cold, Chi Phi has another chance to return to Lafayette.

The 15 members of the Rho chapter presented their application to return to campus as a fraternity on Tuesday to the college’s recognition committee. The brothers may have an answer to their application by the end of next week. If committee gives a negative decision, the chapter cannot apply for another three years.

“I think we’re a great group of guys,” president of the chapter Mike Kaplan ’18 said, “and we really have a lot to offer to campus, if given the opportunity. But all we can do is wait and see what they say.”

The chapter applied last year at the same time as Delta Tau Delta, but the recognition committee decided to advance only the Delts to colony status, because only one group from the North-American Interfraternity Council may advance at a time. The Delts became a Lafayette-recognized chapter in November.

Chi Phi found itself at the center of a hazing investigation last spring, a point the presentation team addressed head-on. Chapter Advisor Jerry Blakeslee ’70 said the incident led to at least two, and as many as four, alcohol-related transports to the hospital. Kaplan noted that after 13 senior graduates, an additional six brothers were removed from the group.

“[The former president] and a couple of other guys, mostly football players, who couldn’t commit to our new direction – we had to place them on alumni status,” Kaplan said.

“Last semester, those rules were there, but since we weren’t under the college’s watch, they weren’t really front and center,” he continued, “but now obviously with everything that happened, we really have to keep those in mind.”

Chi Phi was suspended for five years in 2005 as a result of a series of alcohol violations. When it reapplied to the college, Lafayette refused to accept Chi Phi’s application because Lafayette was reevaluating its relationship with Greek life and revoked the chapter’s college recognition.

Chi Phi Rho chapter sued the college for ownership and management of its house, Vallamont, on Campus Lane. The court decided Lafayette could use the 100-year-old house for student residence, but the Chi Phi housing corporation still owns it.

“Obviously, the end game is to get back in our house, which we do own,” Kaplan said in an interview. Blakeslee added separately that the house has been a point of contention for years, and it will be one of the first points to address if the chapter gets colony status. Advisor to Greek Life Dan Ayala said the house was kept empty this semester in case Chi Phi received colony status.

Ayala added that the recognition committee gave the chapter a number of points to improve from last year’s application. Among them were the articulation of their mission and values, specific examples of programming and diversity of students in their chapter.

Key to an interest group’s application is the group’s “distinctive contribution,” part of which Kaplan said were Chi Phi’s plans to hold “train the trainer” presentations on bystander intervention and alcohol awareness. Chi Phi member Srijesh Panth ’17 said part of the Chi Phi distinctive contribution comes from their building on their experience with hazing.

“With our distinctive contribution, we’d like to not only broaden our own understanding of hazing and the law, but also that of the campus,” Panth said.

Leo Mackenzie ’18, student government representative on the recognition committee, asked the presentation group how they were really distinct, but was “on the fence” about their answer.

“On one hand I’m dissatisfied because I personally would like to see something distinctive,” Mackenzie wrote in an email, “but on the other hand, the school’s annual accreditation process limits Greek organizations to what they can do.”

In addition to Ayala, economics professor Rosie Bukics was the only other member of the recognition committee to also participate last year. She said that this year, the group could more effectively describe the character of a “true gentleman,” one of Chi Phi’s distinguishing values.

Ezra Keough ’17, the chapter’s historian, said the definition of a true gentleman “cannot be taught, it must be experienced.”

“It’s someone who holds the door for someone, eats with someone that’s alone, helps those is need, gives food to the homeless, helps a man who needs guidance…what I’m trying to put in layman’s terms is a true gentleman is someone with a heart of gold,” Keough added.

Executive Director of Chi Phi nationally Michael Azarian gave the last speech at the presentation. He said the Rho chapter was “good” but not “great,” based on accreditation reports.

“I’m looking at essentially their grade report and I’m seeing essentially a C-plus,” Azarian said in an interview. “How do we get them to be that A student? The missing part is the university recognition.”

Bukics wrote in an email that when she asked the question of the presentation group the answer “seemed to put the onus of moving from good to great on the College and its support of the organization rather than sharing the responsibility with the young men in the organization.”

“We’ve been lacking support from the college for 12 years,” Blakeslee said to cap off the presentation. “We need to come back home. Bring us back home.”

Chi Phi said they have 15 to 18 students with known interest in joining, should the recognition committee grant them colony status. A colony would need to apply for chapter status within the college in two to four semesters.