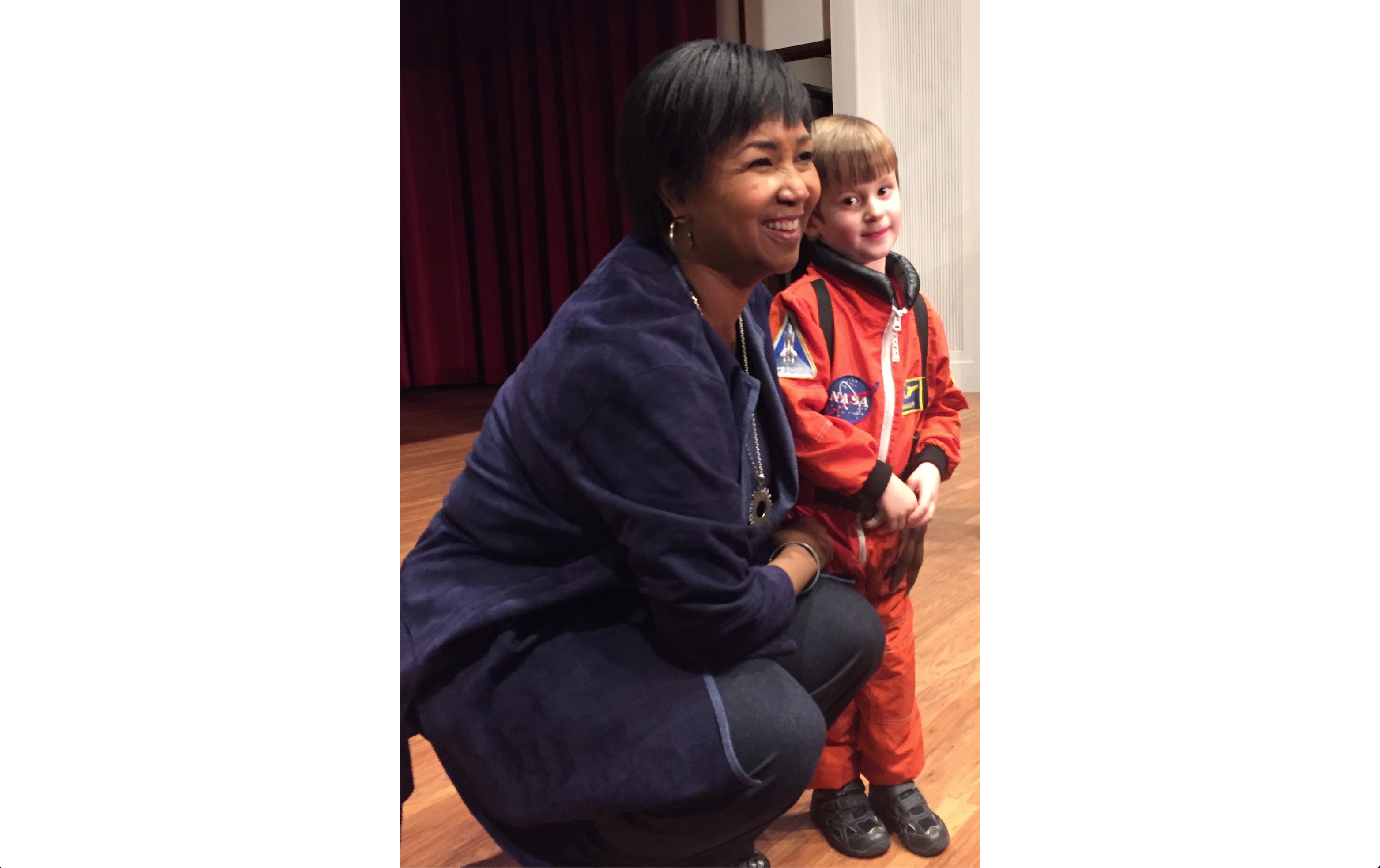 Dr. Mae Jemison and a boy dressed as an astronaut in Colton Chapel (Claire Grunewald ’20)

On Thursday night, Dr. Mae C. Jemison, the first African American woman to go into space, invited Lafayette to go on a “journey across space and time” with her.

Jemison was this year’s Judith A. Resnik Lecture series speaker, a series sponsored by the John and Muriel Landis Fund and the Farber Fund. Jemison was trained as an engineer and medical doctor, but she also has a dance background and is the only real astronaut to appear on “Star Trek.”

She began her talk in Colton Chapel with what she described as the “paradox” of time because it is both limited and infinite. She urged the crowd to use their time fully and not to doubt, but to dare.

Jemison described how being daring is something she worked to embody throughout her life. Growing up the the 1960s, Jemison felt her potential seemed limitless – and that attitude drove her to chase her dreams of being an astronaut.

The accomplished former astronaut currently runs a program called 100 Year Starship, an initiative that is determined to ensure travel to the next closest solar system in 100 years. Jemison said interstellar exploration will provide new perspectives on governance, food and even clothing — perspectives she said are lacking in today’s world.

This lack of perspective, Jemison said, is especially present in the STEM field. She said humans think STEM will provide necessary solutions to problems, but the best path to improve the quality of life is not clear, and it will not become clear through STEM alone. STEM doesn’t encapsulate all that the human intellect has to offer, Jemison said.

In order to demonstrate how interstellar exploration would force humans to rethink what they know and challenge the status quo, Jemison asked the audience to consider their preferences in different aspects of life, including in health, jobs and clothing.

She intended for the audience to think about the needs to be considered for interstellar exploration to occur. How do we handle health, waste, means of traveling through space, work and governance? What is most preferable?

In regards to waste, the majority chose the re-use or don’t generate option over the dumping of waste into space. Clothing produced a wide variety of options including cotton, silk and polyester.

The room was split in half when Jamison asked how people would prefer to travel to another other solar system. About half preferred hibernation and suspended animation, and the other half preferred being awake the entire time.

She subsequently asked about how jobs should be assigned and how systems of government should work. Out of three options for governance, the winner with only a little more than a third of the vote was putting a wise council in place to make decisions.

This activity led up to the first main consideration of interstellar exploration which Jemison described: modern technology, knowledge and information systems and behavior benefits from it.

The second idea to be considered was that life expands – meaning that everything, not just humans, has the tendency to explore.

The third was that humans must accept the reality that we are “earthly beings.”

Barker Carlock ’17, an audience member of the talk, said that Jemison explained the benefits of exploring the universe in a way that related to being humans with problems on Earth.

“Jemison reminded us that the importance of space exploration is not to escape from the issues and problems we face on Earth,” Carlock said, “but rather to challenge the perspectives with which we generate solutions.”

The main reason for her hope of interstellar exploration, Jemison said, was the fact that people continue to dream.

“[It’s the] faith and hope of doing something bigger than we are as individuals,” she said. “We have to believe there is a better future.”

Believing there is a better future means enhancing life here on Earth, and Jemison said she believes reaching the solar system next door will provide humans with the new perspectives necessary to do so.