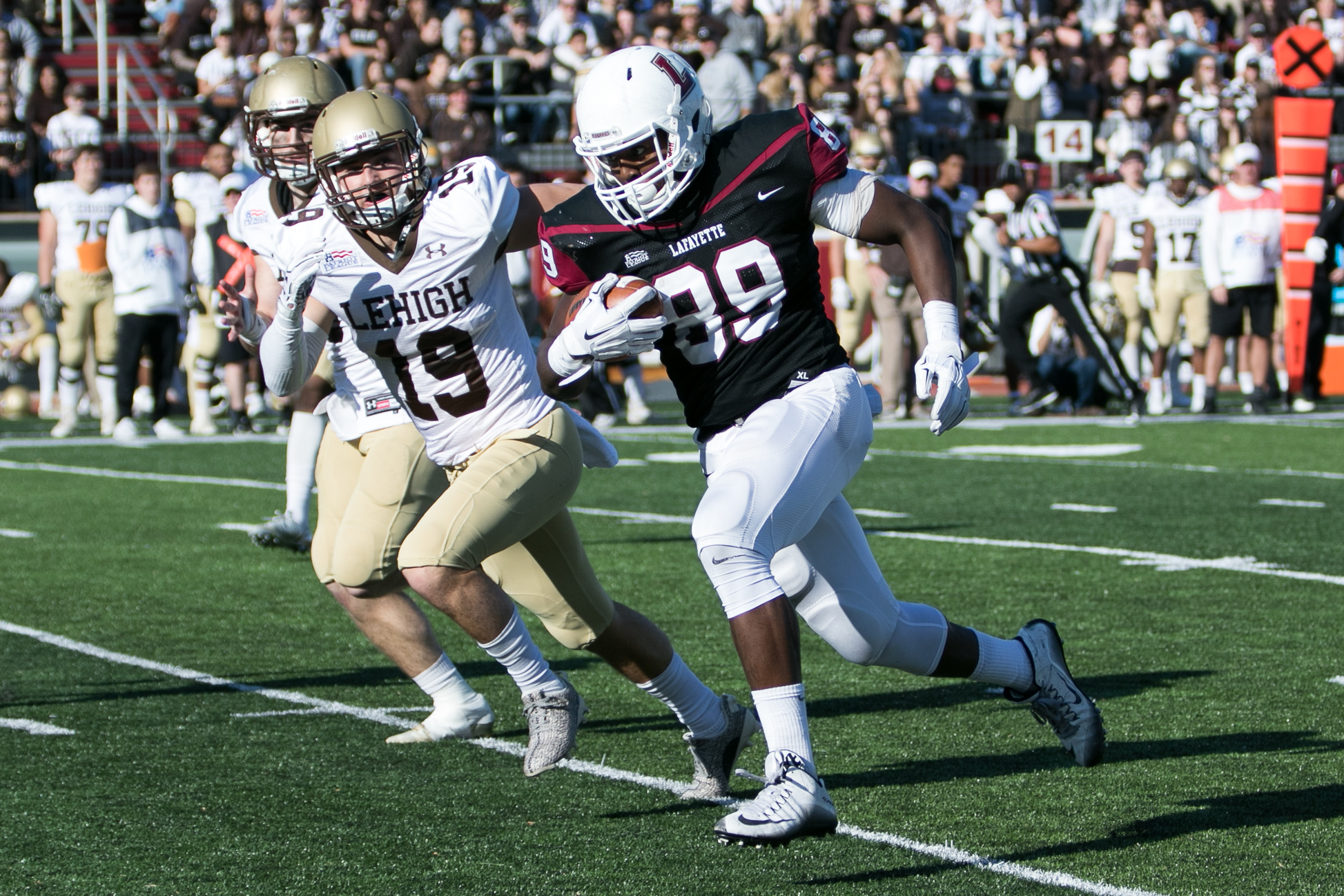 Photo by Hana Isihara ’17. Junior TE Dylan Wadsworth runs with the ball next to Lehigh players.

The Leopards (2-8) faced off against the Patriot League Champion Lehigh Mountain Hawks (8-2) and the result was what many expected.

In what is the most played rivalry in college sports, more than 12,000 people were in attendance at Fisher Field for “Rivalry 152.” After starting the game with a 50-yard drive, junior running back DeSean Brown fumbled the ball to give Lehigh the possession. The Mountain Hawks rattled off 17 straight points after that to take the momentum and silence the Lafayette crowd.

The Leopards responded and scored to stay in the game after senior Drew Reed found junior Dylan Wadsworth for a 56-yard touchdown pass. Unfortunately for the Leopards, the Mountain Hawks scored three straight touchdowns to take a commanding 45-7 lead.

The Leopards were able to make the game respectable however, as they scored two touchdowns to trim the margin of defeat. With 1:28 left in the third quarter, Reed found sophomore C.J. Amill for a 17-yard touchdown, but the extra point was blocked. After Brown ran in for a touchdown in the fourth quarter, coach Frank Tavani called a trick play that involved both Reed and senior quarterback Blake Searfoss. Searfoss fake-handed it off to Reed and found him in the end zone on the play action for the two-point conversion.

In the end, the Leopards lost to Mountain Hawks by a score of 45-21. That marks the first time since 2012 that the Mountain Hawks have won at Lafayette, and the second time they’ve won in as many years.

Following Laf-Lehigh, Lehigh moved on to the FCS Playoffs, where they lost by a score of 64-21 to New Hampshire.  For Lafayette, however, they will enter the postseason with a loss and many questions, with Reed and Searfoss graduating, as well as multiple seniors at key skill positions graduating.