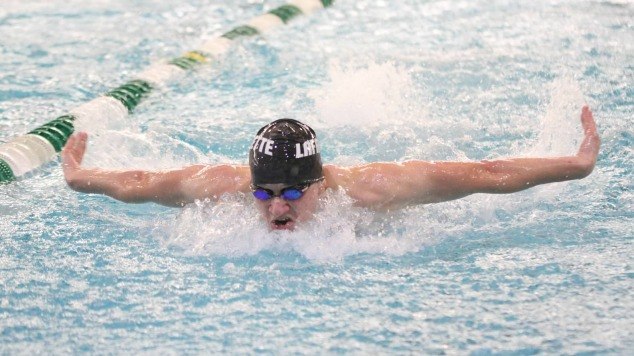 A.J. Traub: What has changed about the swim team during your tenure here?

Sam Haines: I’d say that we’ve become more serious, really, just over the two years that I’ve been here. The whole atmosphere of the team, everybody is always ready to work hard at practices. We’ve had a lot of success, both individually and against some of the other Patriot League schools over the past few years, which have elevated the team to being more competitive in the league.

AT: As a current junior, what do you hope to accomplish in swimming over the rest of your time at Lafayette?

SH: The biggest goal is to set a school record. That has been my biggest goal ever since coming to Lafayette. It’s also a big goal of mine to get an NCAA cut time.

AT: Do you think the Leopards can snap their Lehigh rivalry losing streak this year?

SH: I don’t know about this year. They have a really talented senior class, but I know next year and moving forward it’ll be closer and closer. Doesn’t mean I’m not hoping to win.

AT: What are some keys to victory or major factors you are anticipating when Lehigh comes to town?

SH: The biggest, most important races during the meet are the relays, so they are the key focus at the beginning and end of the meet. Historically, we can beat them in the medley relay, so we are hoping to defend that this year.

AT: Has your role in leadership changed with the team over time so far?

SH: I’d say that there is a need for leaders that weren’t specifically captains this year. I’ve always believed in leading by example, and I know that the extra effort I put in during training helps set the tone for the rest of the swimmers.

AT: Has someone in particular from the team in previous years helped you get to where you are now?

SH: I looked up to Topher Wickwire [’16]. He was the number one butterflier the last couple of years. I really looked up to his ability to always race really well, no matter what point in the season it was, he would always get up on the blocks and swim the best race he could. It didn’t matter how tired we all felt.

AT: What is your favorite part of being on the team?

SH: I got to say the social aspect because we all spend so much time together. We are one of the few teams that spends the majority of winter break on campus for training. So we end up spending a lot of time together watching movies and playing “Super Smash 4” in between practices.

AT: What do you do to get pumped up for a meet?

SH: I always follow the same routine that I’ve established. I like to be pretty social before the meets. I try not to get too worked up in my head about racing. Right before my races I usually listen to music.

AT: What kind of music?

AT: With so many events in one meet, what do you do when you are not competing?

SH: You always have to take care of yourself right before and after your races, warming up and warming down in the pool. Stretching and getting some food. There’s usually still a lot of time. Everyone tries to watch the pool as much as they can to cheer each other on.

AT What kind of food?

SH: We try to not eat anything heavy, so I try to eat fruit snacks, granola bars and fresh fruit is good, too. The apple caramel cups from Wawa – I’ve been having those every meet. It just turned out well, so…

AT: Do you have a personal or team motto?

SH: Lafayette swimming is like a chainsaw. The story has been lost in the history of the swim team, though we say it at every meet.