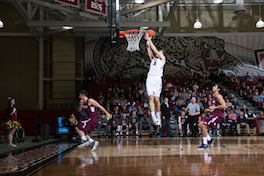 After a seven win season, it may be hard to get your confidence back when your first game of the season is against the national champions.

The men’s basketball team’s season began Friday against the Villanova Wildcats, ending in a loss for the Leopards. Kris Jenkins, who scored the NCAA Tournament winning three pointer last year, is on the court again this year for Villanova. In fact, it was Jenkins who began a 25-2 start for the Wildcats: a deficit the Leopards could not dig their way out of.  The first half ended with Lafayette down 49-17, and the game concluded with an 88-48 score line in favor of Villanova.

“We wanted to go into this game and improve more than anything, so it was a good experience for the young guys,” said senior captain Nick Lindner.

“Having that as their first game – it only gets easier from here,” said Lindner.

The main focus for the team going into the second game of the season on Monday night at St. Peters was to stay in the game through the first five minutes. This was accomplished as the Leopards began the game with a 7-3 lead. A lot of back and forth scoring left the game nearly even at half, with the Peacocks up 26-25.

A strong start to the second half carried St. Peters to an 11 point lead with under five minutes left, and a 54-45 lead with less than three minutes to play.

However, a relentless Klinewski, who finished the game with 26 points, scored a two pointer and stole the ball back on the subsequent play leading to another basket. Lindner hit two free throws to pull the team within a point with less than a minute remaining. With twenty seconds left on the clock, junior Eric Stafford scored on a three point shot to give the Leopards the lead, which they carried to the end of the game. Lafayette won with a final score of 61-57.

“Practice perfectly prepared us for that game-situation. We pretty much executed perfectly the last three minutes of the game,” Stafford said. “That’s exactly what we needed; we just don’t want to get in that situation again.”

The Leopards next four games will be at home against NJIT, Cornell, Princeton and Drexel.