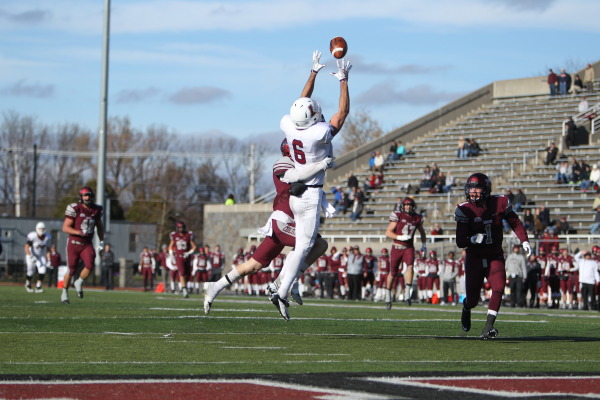 Despite coming off their first home win of the last two seasons and a bye week to get healthy, the Leopards weren’t able to continue any momentum they had and bring home another win against Colgate.

Colgate was able to do what the Leopards have struggled to for much of this season: combine the pass and run game effectively to put points on the board. That led to Lafayette’s eighth loss of the season.

The first half decisively belonged to the Raiders. After scoring on their first drive of the game, the Colgate offense settled for a 38-yard field goal at the end of the first quarter to bring their lead to 10-0.

Things didn’t get much better in the second quarter for the Leopards. Colgate QB Jake Melville found Owen Rockett for a 19-yard touchdown that stretched the Raiders’ lead to 17. Lafayette came close to scoring on their next drive, but at fourth and one at the Colgate 19 they couldn’t swing the first down and turned it over to Colgate.

Colgate capitalized and used just four plays on their next drive to tack on a touchdown and extend their lead even further.

Lafayette clawed back just before halftime. Senior QB Drew Reed found junior receiver Rocco Palumbo for a 32-yard touchdown to put Lafayette on the board just before heading to the locker room. Palumbo had a career high 104 yards on seven catches.

The beginning of the second half swung the momentum in Lafayette’s favor with junior linebacker Rob Hinchen recording the team’s first safety since 2010. The offense used their next drive to score a touchdown off a DeSean Brown carry. The junior running back had 91 yards on 15 carries for the day. Reed connected with sophomore Joey Chenoweth on the two-point conversion to pull Lafayette within a touchdown, 24-17.

Lafayette couldn’t find the equalizer and Colgate tacked on two more touchdowns to put the win out of reach.