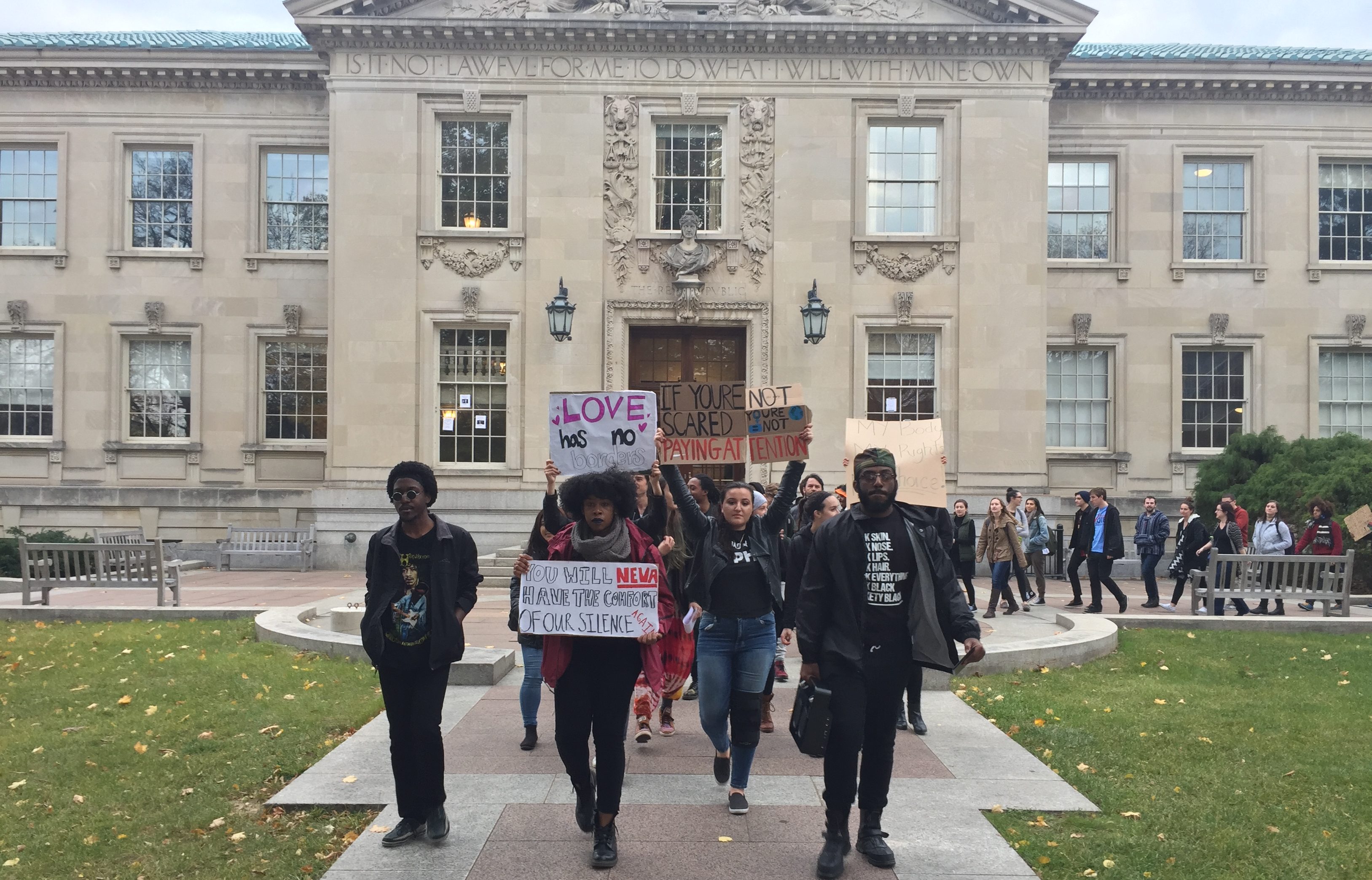 Students march across campus as part of the #OurCampus walkout movement. (Will Gordon ’17)

Roughly 200 students walked out from their classes on Wednesday in the latest of students’ demonstrations in reaction to the presidential election last week.

Last Friday, those living on Lafayette’s campus woke up to roughly 300 “Not My President” posters distributed across campus, and a silent protest took place later that day. A few Lafayette community members joined an anti-Trump rally in Easton Centre Square on Saturday.

Then, at 3 p.m. on Wednesday, students organized an #OurCampus walkout, part of a nationwide event, that looped around campus, beginning at Farinon and ending on the Quad. They held signs that read “Dismantle White Supremacy,” “If you’re not scared, you’re not paying attention,” and “You will neva have the comfort of our silence again.”

Forming a large ring on the Quad, the students then exchanged a megaphone between them to share stories and rally the crowd for their cause.

Several other students shared that they were victims of sexual assault, children of undocumented immigrants or frequently subjected to racism or misogyny. Fayola Fair ‘19, who attended and helped organize the rally, said she is also planning on submitting a plan to President Byerly to make Lafayette a “sanctuary campus,” or a school makes a “firm commitment to making marginalized groups feel safe on campus.”

“I’ve been seeing a lot of emails from Lafayette and I went to the discussion after the election,” Fair said. “I felt a lot of it was about, we should all come together and we should all love and we should just respect that people have differing views, which is okay, but when people feel unsafe on our campus and you simply say we need to come together, and support each other as a campus, that wasn’t enough for me.”

“I told my students that I knew that this was happening and that I wanted that everyone to feel that they could make their own decision about where to stand at this time,” Stewart-Gambino said.

“If you’re going to make a physical statement about how marginalized or how unsafe you feel here,” she added, “and you call on me to come stand in support and to show that I protect your place here, absolutely I’m going to do that.”

Drew Harmon ‘20 watched the rally from a bench on the Quad, but did not participate.

“Differing opinions about the result of a presidential election aren’t to be unexpected,” he wrote in an email after the rally. “But an unwillingness to accept the results of this legitimate democratic process is hypocritical of the group of people who so intently preach acceptance and tolerance of others’ ideas. It’s time to embrace the outcome of a fair election and move on.”

One student was heard shouting “Make America great again” from nearby Kirby residence hall toward the end of the rally. Roughly a dozen students entered Kirby, and later the student who shouted emerged with them. He took the megaphone and apologized to the already waning crowd for his words, which the crowd said were inflammatory. A few members of the crowd expressed to him that they felt the campaign slogan embodied bigotry.

John Ottinger ‘17 was walking back from work last Friday, Nov. 11, when he passed the silent protest on the steps of Farinon. He said he ignored his inclination to avoid hot topic issues because had seen how distraught his friend, Ryan Cerbone ‘17, was. Cerbone had organized the posting of 300 “Not My President” signs around campus the night before.

“I felt compelled,” Ottinger said. “I had to sit with my fellow students who are marginalized by our current president-elect… Being a white male, it makes me mad that I see these incredible people who are excelling beyond whatever I’ve ever done being discriminated. It kills me from the inside.”

Byerly stood in support of the students silently protesting but did not participate.

“I share their…concerns that a lot the rhetoric increases the divisiveness on campus and elsewhere,” she said. “And now is a good time to stand up in support of the values of diversity and inclusivity that we share at Lafayette.”

The next day, a planned anti-Trump rally prompted a pro-Trump rally in Easton Centre Square. Of about 100 members of the anti-Trump demonstration, a few Lafayette community members joined. Religious studies professor Jessica Carr attended for more than an hour holding a sign that read, “Everyone belongs in my America.”

“In addition to being afraid of Trump coming through on his political promises,” Carr said. “I’m afraid of the vigilante acts of racism and misogyny and especially what we’ve already seen, big anti-Muslim bigotry.”

Some Lafayette students are expected to hold a demonstration at the Laf-Lehigh game on Saturday.

Poor “snowflakes”. God forbid anything contradicts their formal “indoctrination” by the very “objective” faculty of this sad institution.
R. Hoover 1956

Thanks, Senator McCarthy. This is a great appeal to “the better angels of our nature.”

So is the college offering refunds for the classes that were cancelled so the professors could throw public temper tantrums instead of working? Students and parents might want to insist on that. Those of us in the “Real World” honor our work commitments and reserve our tantrums for evenings and weekends, outside of working hours.

Understandings outside the classroom including activism has always been a part of Lafayette College. Academic reforms that have shifted both the liberal arts and engineering programs in various ways have been due to student protests and movements. Conferences on social justice have been held by Lafayette College where all college classes were cancelled. These values have always been a part of Lafayette College and is part of a liberal arts education. As an alumni this is something I value and appreciate but also know its an understanding when you join this prestigious academic institution that instances like this will and more importantly should happen.