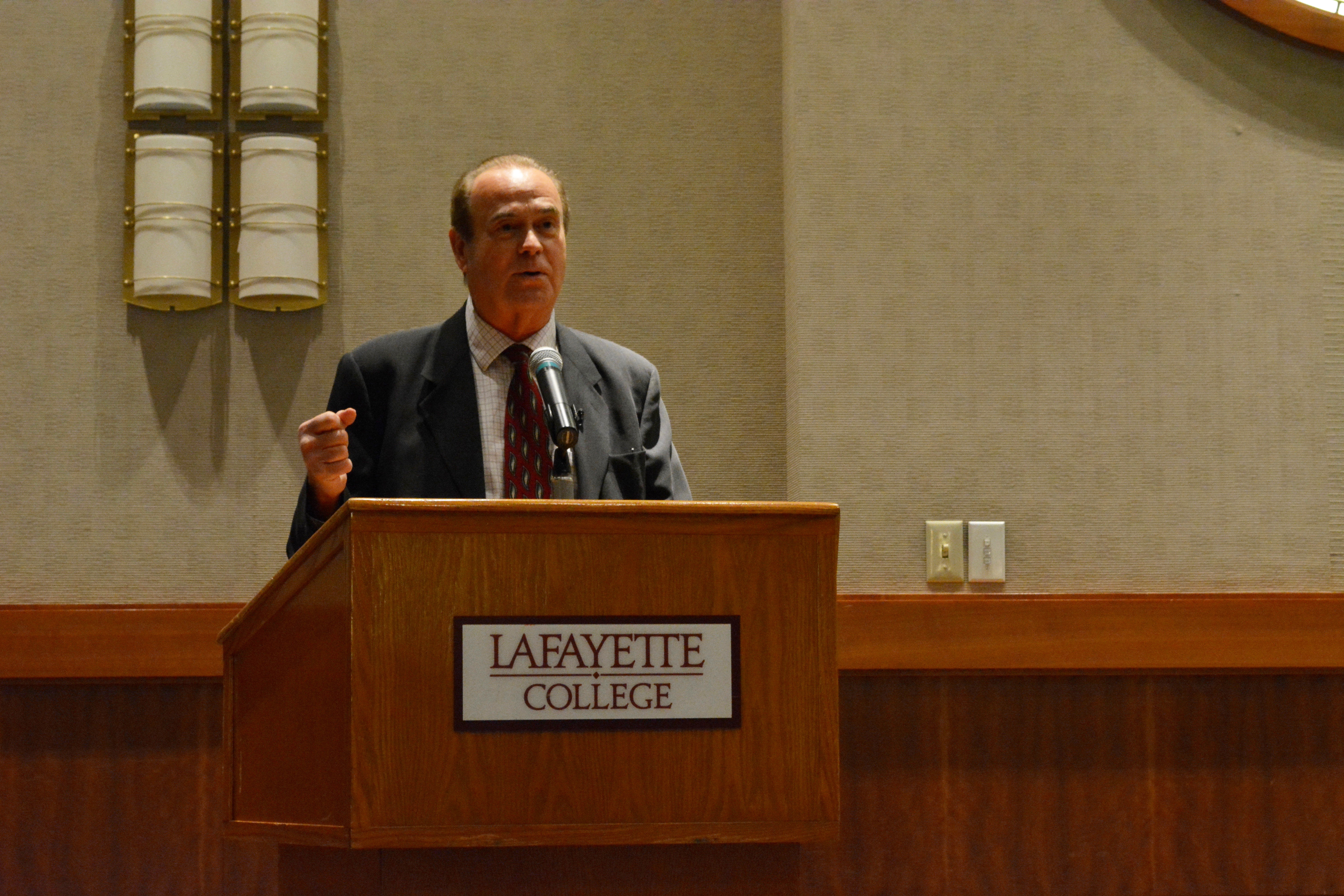 Dimitri Villard was introduced to a few interns at a friend’s company one day. When the film producer heard the students were from Lafayette College, he seized the moment.

“I couldn’t resist,” he told a crowd in Pfenning Alumni Center. “I went in to full pitch mode and started telling them about my dream to produce a television series about the Marquis de Lafayette.”

That television series is now one of three projects he is working to produce. “Soul Catcher” aims to remake Frank Herbert’s “Dune” novel, and “The Second Mother” will be an American version of the 2016 Brazilian film.

Villard’s career has had its ups and downs and jumps and jolts – both in and out of the film industry – but a common thread has always been his drive to produce in Hollywood. He wanted to study drama in college, but his father asked him, ‘Have you thought about getting a job?’

So he planned a “back-up.” After graduating from Harvard and receiving a graduate degree from Chinese Medical University, he entered international finance but quickly diverted back into entertainment. At New York University film school, he learned that the most important part of a movie was not production, but financing the endeavor. He made a gamble with the burgeoning pay television industry, which he said was a radical idea in the early 1980s.

“People were actually demonstrating in front of theaters,” Villard said. “People were carrying signs saying ‘Stop Pay TV.’ But a couple of friends and I started a company.”

After the first film production companies like Universal Studios joined their venture, they launched California’s first pay television station, called Channel One. They competed with companies like HBO, which had seemingly “unlimited” budgets.

While he was trying to insert himself into the movie business, Villard found it was not as easy, nor as glamorous, as it seemed.

“When you read the magazines and see the photographs of all the stars and the premiers,” he said, “and you read the gossip about the Kardashians, you think, ‘Wow, what a great life.’ It’s not.”

“I hate to pop the balloon of this illusion, but frankly, it’s a cut-throat, dog-eat-dog world,” he added. “People would sell their grandmother if that could get them a deal.”

One particular example stood out in his mind. His team offered a starring role to Christopher Reeve, but Reeve’s agent quickly responded that he hated the script. Disillusioned, Villard sought out Reeve’s phone number to talk to him personally.

“And he said, ‘What script? I haven’t read your script.'”

Having since also headed up an internet music firm, biotechnology firm and investment bank, Villard is returning to film on his new projects.

Villard said an idea “hatched” when he met with some film and media studies students before his talk on Monday. The Marquis de Lafayette mini-series could become a documentary.

“It could become the basis for a larger project,” he said, “but there’s nothing like having a feature-length documentary that tells the story that you can show people.”

Is the Lafayette series still happening?