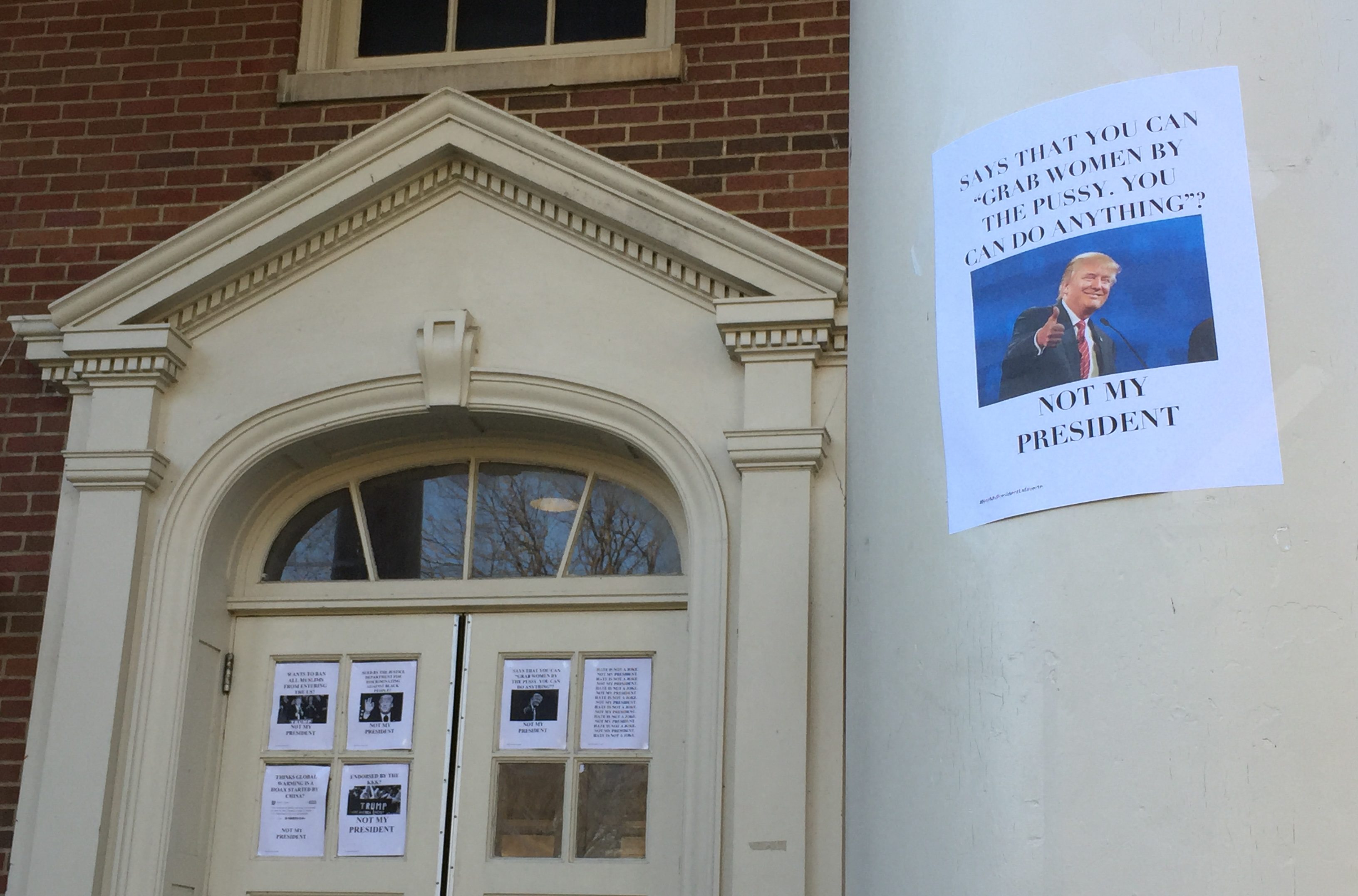 As families of prospective students poured onto campus Friday, they were not only greeted by tour guides, but also with roughly 300 posters covering campus protesting Donald Trump winning the presidency.

These posters were put up by members of the Lafayette community who are a part of the Facebook group #NotMyPresidentLafayette started by Ryan Cerbone ‘17. According to Cerbone, the group was started with only a few people, but blew up fast.

“I was talking with a couple of my friends after the discussion on campus [Wednesday], and I had really good conversation, […] but a lot of us just felt like we talked and then there wasn’t going to be anything,” Cerbone said. “I made a Facebook group with a couple people who I thought would be interested, and then I went to lecture and when I came back there were like 350 people in the group.”

Lafayette College is not the first to see protests after the election results came in. New York City, Chicago, Boston and Philadelphia are only some of the cities where people are voicing dissent against the president-elect.

The posters were Cerbone’s idea, and he made them to get attention of the Lafayette community and families during the admissions event.

“I started the group with the idea that we would hang posters around campus just to not only raise awareness, but also [it] is an open house for admissions, and I feel like just because we didn’t get a strong vibe from administration that they’re going to push the inclusivity vibe, that we should do that by showing people that we are a politically active campus,” Cerbone said.

Dean of Admissions Matt Hyde did not respond for comment by press time.

According to Cerbone, around 80 people expressed interest in helping with the posters, but the group was limited to 50 to ensure efficiency and to draw as little attention as possible.

The posters were only hung on the outside of buildings, and were restricted to academic buildings and public areas only.

Cerbone also encouraged group members to print out posters to hang up all of Friday and to replace any posters that were torn down. During the day Friday is also when the group planned to put their posters inside residence halls.

Originally, the group was started with just the intention of hanging posters around campus. However, according to Cerbone, many people with several other ideas and opinions have started to plan their own events.

“Now that the group has blown up to the degree that it has a lot of people have ideas of things they can do and it seems that group is going to be a big resource for the anti-Trump rhetoric,” Cerbone said.

For him, this kind of activism means expressing concern and distrust for a president he said he feels doesn’t represent him.

Both Clinton and Trump were under clouds concerning presidential qualifications. This was a most difficult election in whiuch to cast a vote. As the polls closed, it appeared that the Clinton campaign had erred tactically and did not have good political analytics. ABC News reported this event in detail. In the first 24 hours after the election, both the New York Times and the Washington Post reported how Clinton lost the election.

The vote was about Character and content of the next presidential administration. It was not an indictment of Mrs. Clinton’s background but of recent signals of her character. The people of the central states and of the countryside of Pennsylvania do not want a person who does not care about them and who is untruthful.