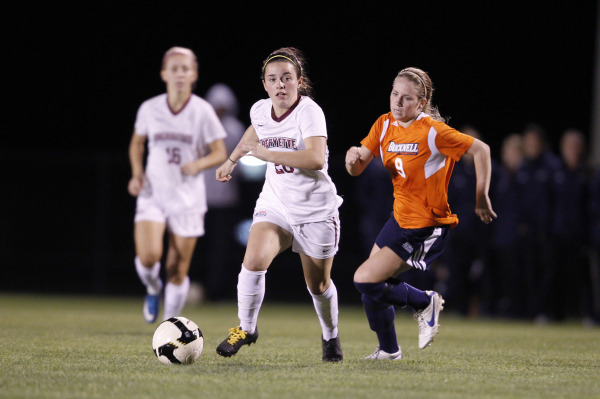 The women’s soccer team’s historic season ended Friday with a 2-0 loss to Bucknell in the Patriot League Tournament semi-finals.

Heading into the game, Lafayette tried to channel their excitement from Tuesday’s double-overtime win against Lehigh into momentum to stand up to the top-seeded Bucknell team.

The Leopards’ defense was able to hold a powerful Bucknell team to limited amount of dangerous opportunities during the game, forcing the Bison to take many of their shots from a distance and at low angles. However, the Bison were able to capitalize in the 27th and 68th minutes of the contest to seal their way into the final round, where they were able to claim the league title.

Despite the result of this final game, 2016 will definitely be a year to remember as the program continues. After achieving their goal of having a better than .500 season last year, the seeds were sown for even more success to come this fall. Led by eight strong seniors, the team was determined

to take it a step further and make it into the tournament for the first time since 2011.

The team got off to their best start in program history, going undefeated in its first five matches, including three wins. Although the beginning of Patriot League play demonstrated that there was some fierce competition throughout the league, securing big wins at American and Holy Cross kept the Leopard’s tournament dreams alive.

An overtime win in Annapolis against Navy brought the tournament berth even closer, and despite a loss to Colgate following weekend, the rest of the league’s results worked in the Leopards favor to give them the sixth and final spot in the tournament.

The victory on Lehigh’s home turf a few days later served as a bit of payback for the home loss the Leopards suffered against the Mountain Hawks a few weeks earlier.

Throughout the highs and lows of the season, Lafayette was able to maintain their confidence and maximize the capacity of each player, including the freshman class who caught on to the plan quickly.

“Excellent team chemistry allowed people to show what they could do on the field,” said senior captain goalkeeper Danielle Sedillo.

The team’s work that led to this season’s success has set a foundation that it can continue to build on and has proven to both the program and opponents that Lafayette soccer will have a presence in each game and season.