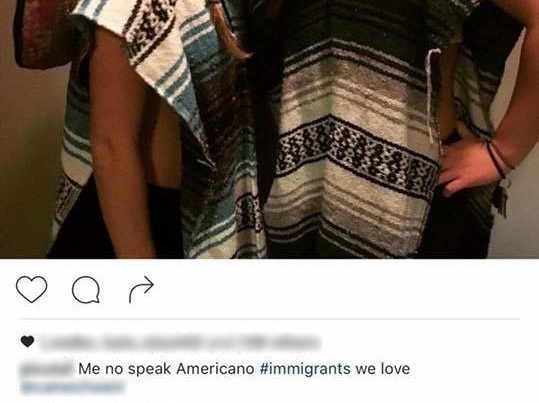 More than four online reports of one Instagram post were submitted on the Bias Response Team’s (BRT) website after Halloween night. The post featured two students wearing costumes which many others viewed as appropriating Mexican culture and being racially insensitive.

The post was of two Lafayette students, who put on sombreros and ponchos to dress up in matching Mexican-themed outfits for Halloween. The caption of the post included “Me no speak Americano #immigrants.” The post has since been taken down from the account, which has been deleted.

The team, which consists of chair Chaplain Alex Hendrickson, Dean of Students Paul McLoughlin II and Director of Student Conduct Jennifer Dize, among other faculty and administration, is going to meet this week to discuss complaints about the Instagram post and the course of action they can take as a result of it. The BRT meets regularly to discuss incidents that are reported which are viewed as “discriminatory toward another person or group,” according to their website.

StandUp, a social justice blog at Lafayette, reached out to the girls featured in the post to meet with them and discuss the incident, but they declined. However, Hendrickson said she hopes in the future that discussion between those who reported the post and the students involved in posting it will occur.

“I think my ideal outcome would be that the students involved would be willing to have a face to face conversation with some of the students who were directly affected,” Hendrickson said. “I can’t say at this point if that’s going to happen.”

Co-Editor-in-Chief of StandUp Alex Bell ’18 and member of StandUp Natalia Nevarez ’17 agree that this is just one example of a much larger issue at stake on the Lafayette campus. This was not the only offensive costume of the night, and it is not uncommon for Lafayette students of color to feel “devalued on campus” as Bell put it.

Nevarez and Bell both said that this incident is reflective of a mentality of many Lafayette students.

“Students of color are not valued as much as the white majority [on the Lafayette campus],” Bell said.

“The school needs to make structural change to alleviate this burden off of students of color,” Bell added.

Bell and Nevarez, who is of Mexican heritage, said they saw the girls walking around campus in their costumes that night.

“Me and my friends who are also Mexican were very, very upset,” Nevarez said. “Out of everything you could have dressed up as, why did you choose this?”

The photograph and caption were posted by a friend of the account holder, and this friend emailed an apology to those who were offended by the words.

“In the middle of the night, I played around on her phone, and posted the picture with the rude comments. I did not intend for anyone else to see the rude comments, and I am very sorry this got out to the public,” the student wrote. “The comments were very unintentional and I did not think about any of the side effects that my words would have on other people.”

“I personally understand why you all are offended and I am extremely sorry that you have had to witness and deal with this issue,” the apology continued.

The account holder also emailed an apology to those who submitted a report about the incident and apologized for her insensitivity.

“It was inappropriate and culturally inaccurate to wear those costumes, and my intention was never to genuinely hurt anyone or disrespect an entire culture,” she wrote.

“I am now aware of cultural appropriation and making inaccurate generalizations about different cultures,” she continued.

Her roommate, also pictured in the post, wrote an email to those who submitted a report to the BRT apologizing for wearing the costume and wrote that she did not know the meaning of cultural appropriation until this incident.

When the Instagram post was reported in StandUp’s Facebook group, StandUp member Nevarez decided to write a piece on it for the blog, entitled, “An Open Letter To The Girls Who Dressed Up As Immigrants.”

Nevarez said she received a lot of positive feedback from her article, even from people outside Lafayette. She said she received private Facebook messages from friends who are undocumented immigrants thanking her for giving them a voice.

“They were just happy someone finally said something,” she said.

Part of the solution, Navarez said, is for the college to take initiative teaching students about race. Nevarez suggested that the school should require students take a class on race as part of the core curriculum requirements to begin to amend this problem. But both have said that, currently, they don’t believe the school is doing as much as it should to help the situation.

“Even just a reaction,” Nevarez said. “Just someone saying, ‘This happened. Let’s talk about it,’ would be a step up from where we are now.'”

Hendrickson said that she can’t predict what course of action the team will take after their planned meeting for later this week, but she hopes that a productive conversation can be started on campus.