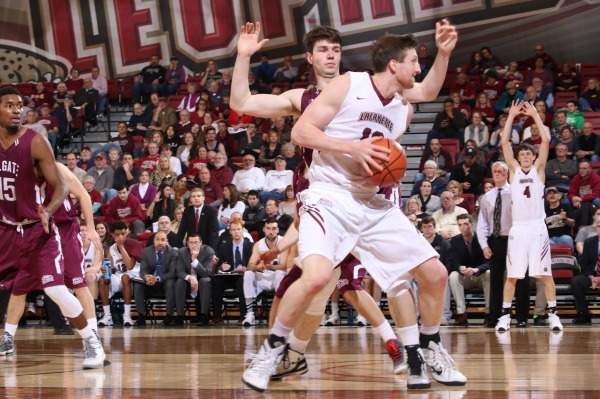 Matt Klinewski ’18 posts a defender up. (Courtesy of Athletic Communications)

The backcourt is going to look a little different this year with Zack Rufer ’16 and Bryce Scott ’16 graduating. Expect an increase in playing time for junior Eric Stafford and sophomore Auston Evans at guard, along with Lindner and Boykins. Down low, the Leopards lost Nate Musters ’16, Ben Freeland ’16 and Billy Murphy ’16. There has been much speculation as to who is going to get significant playtime in the front court, but it looks like Klinewski and Zalys will start, with sophomore Sam Dunkum and freshman Myles Cherry coming off the bench.

Boykins, Lindner and Klinewski – three of the team’s top four scorers last season – will be back in the starting lineup for the Leopards. Additionally, head coach Fran O’Hanlon enters his 22nd season with Lafayette as the Patriot League and college’s all-time winningest coach.

For a team that won just seven games last season, it’s pretty difficult to find strengths. Offensively, the Leopards should be solid as they have three players who averaged double digit points last season.

Last season the major problem for the Leopards was defense and rebounding, and that might stay the same this year. With three forwards graduating, Lafayette is going to have to plug in young and unproven big men to fill the hole, something that might prove to be difficult.

“We’re definitely looking to improve our rebounding and defense. We know the scoring is going to come, if we improve in those areas we can definitely have a good year,” Boykins said.

Jamie O’Hare ’16, known for her game-winning inbound play that garnered national attention when video of it went viral two seasons ago, has graduated and left a big hole in the back court. Sophomore Alex Cantwell, who started 18 of the last 19 games of the 2015-16 season, and Stipa look to fill in that hole.

The Leopards front court will, for the most part, be the same. Lutz, who led the team in rebounding last season, and Ottewill-Soulsby, the team captain, will be a dominating force down low for the Leopards. Additionally, Hood, who missed the 2014-15 season with a torn ACL, returned last year and averaged 9.6 PPG. Expect her to be a scoring threat this season after dropping 29 points in last season’s finale.

If there is one thing this team has, it’s experience. The team’s top four returning scorers are either juniors or seniors, and five key players in the rotation are upperclassmen. Also, size will be a strength for the Leopards. Head coach Theresa Grentz said that strength building was a major priority for the Leopards this offseason, and they hope it pays off down low.

Although the team has a strong veteran starting lineup, the Leopards lack depth. Bench scoring will come at a premium this year and the Leopards will rely on newcomers and young players to contribute off the bench.

Both coach Grentz and the players are trying to build a culture and label their brand. In her second season with the Leopards, Grentz is looking to change the outlook for the program, which can be seen in the offseason workout regime and challenging non-conference schedule.

Last year’s regular season champion Bucknell is slated to finish first again this year in the Patriot League, with Lehigh finishing second. Lafayette is expected to finish in eighth place out of ten teams.

“This season we’re building a culture and labeling our brand, we’re working collectively to get better and it’s a process but were getting there,” Ottewill-Soulsby said.