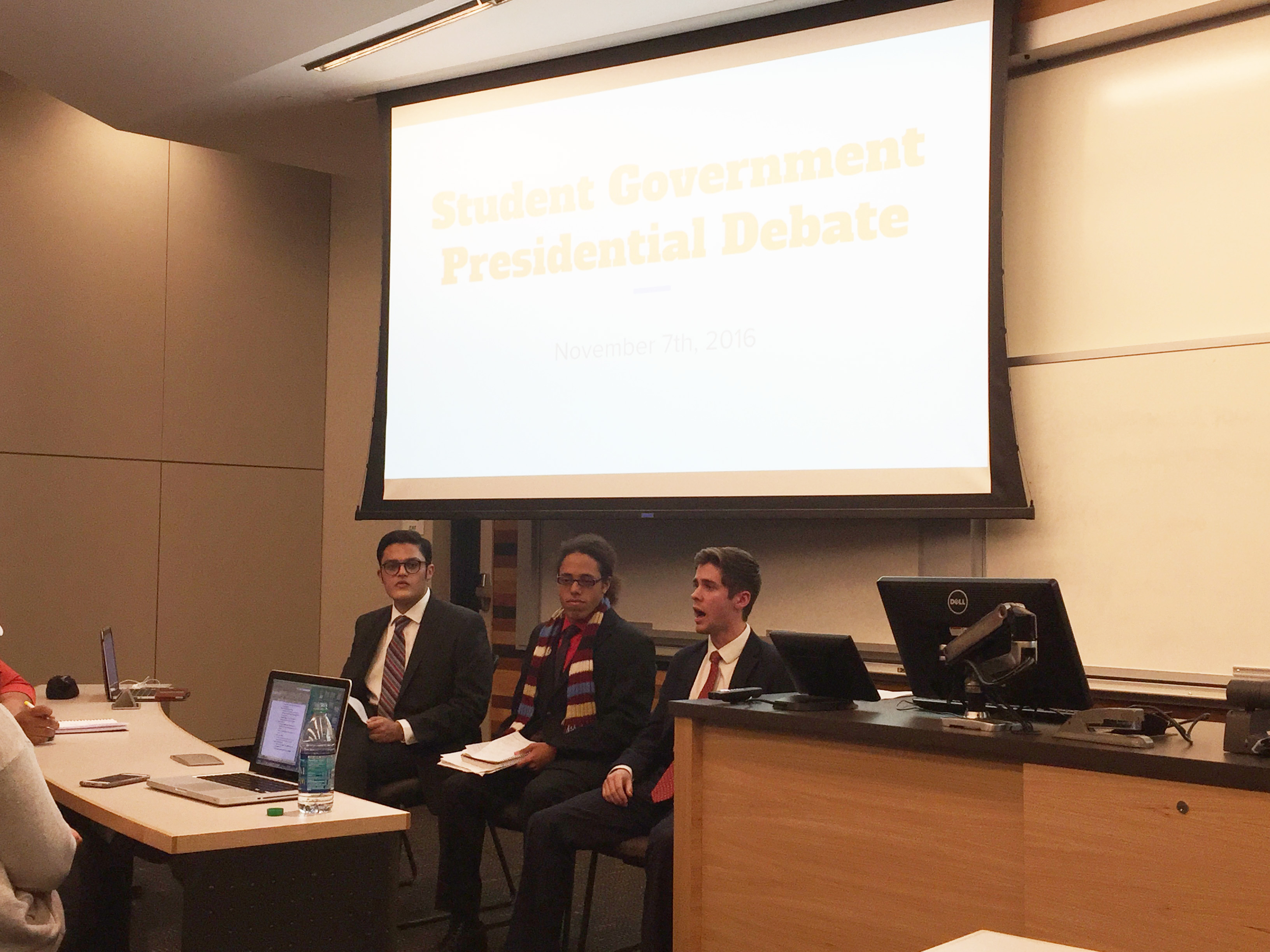 Although the national campaigning season is over, there is another presidential election taking place much closer to campus.

Much of the debate, held in the Oechsle Center for Global Education, focused on the candidates’ plans to allocate student organization funds and to make student government represent all groups at Lafayette.

Seven of 80 student organizations receive 53 percent of student government’s budget, according to Akbar. He said those seven clubs are sports teams and The Lafayette.

To reduce the amount of money student government allocates to those seven clubs, he said he wants an ad hoc committee, which has already been established, to work with sports clubs to look for alternative sources of funding, like alumni donations and fundraisers on campus.

“The idea is that we would work with them, and connect [clubs who receive a lot of funding from student government] to outside sources of funding, connect them to alumni, give them ideas and support them in fundraising events,” Akbar said in an interview after the debate, adding that this would free up more money for student government to support other events.

Burwell agrees that outside sources of funding for clubs will alleviate pressure on student government, but adds that he wants to go a step further.

“I’m not just curious about or interested solving actual monetary discrepancies, I’m really curious about how the money is being used,” Burwell said in an interview after the debate.

Clubs should be using their money efficiently, he added. One of the ways to consider how that money is being used is to look at how well-attended a club’s events are, he said, and how this money is benefiting its members.

Pasikhani, who was asked to resign from student government in spring 2015, won reelection unopposed as a representative this year and said he wants to provide funding for food for any two student groups that want to co-sponsor an event together.

He was asked to resign because he missed too many meetings, he said in an interview last year. Pasikhani added in an interview this year that his “methodology wasn’t that of a student government member.”

As president, Pasikhani said he also wants to increase student government’s communication with the rest of the campus. He said that for 30 minutes in every student government meeting, he wants to go talk to students in Lower and Upper so they can communicate better with those they represent.

Akbar said he is working with several administrators to put flags up in Farinon representing the home countries of the international students on campus.

“The entire purpose, at the end of the day, is to celebrate how diverse a community Lafayette is,” he said.

Burwell said that, as student government president, supporting groups of students that feel marginalized at Lafayette starts with listening. On top of that, he said, he would like to be proactive with student government’s support for any demonstrations or protests these students may do on campus.

“We did spend a while developing a platform together, but this is not something I believe cannot be done if Connor were not to be there as president,” he said. “We both are elected to next term, so we both will be serving on student government, and I’m fully confident that, whoever the president is, I can definitely work with to put across some of my ideas.”

Nebhwani, who Akbar endorsed, wrote in an email that she also feels she could work well with Akbar, Burwell or Pasikhani.

“I feel like I could work with Connor and Bilal very easily due to spending a year in StuGov with them,” she wrote in an email. “I’ve never worked with Sohrab before, so I can’t give a definite answer. But, I trust my communication skills enough to believe I could work with anyone.”

If elected, Nebhwani wrote that she wants to increase communication between students, faculty and the board of trustees.

“One of my plans in office is to continue and formalize meetings with student representatives from our faculty and board of trustees committees in order to increase transparency and communication in our community,” she wrote.

Glaser said student government could help all student groups get outside sources of funding, not just large ones.

To get on the ballot, Pasikhani was required to appear in front of student government to discuss how he has grown as a person who can be part of a group dynamic and his views on the organization due to an amendment to student government’s bylaws passed a year ago. The amendment requires anyone “who has been impeached/asked to resign” to meet with student government so it can decided whether to allow him or her to run for office.

Pasikhani was blocked from running because of that amendment last year. This year, student government voted 7-5 to allow him to run, according to Akbar, who is also the chair of representation on student government.