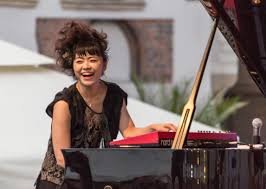 If the word “energy” is not immediately associated with jazz piano, artist Hiromi Uehara may soon change that. Professionally known as Hiromi, her music is a driving force in a genre that can sometimes be stuck in the past.

“The energy is just there in me,” Hiromi told the New York Daily News.

Drawing inspiration from jazz, Hiromi incorporates an eclectic mix of sounds from genres such as funk, swing and rock.

According to her website, Hiromi began playing piano at the age of six when she preformed in her first recital and enrolled in the Yamaha School of Music. At this time, Hiromi also started writing music. While her teachers exposed her to jazz, she was encouraged to draw inspiration for her music from both traditional structures, as well as her own intuition.

When she was 20, Hiromi moved from to the United States from Japan to pursue an education at the Berklee College of Music in Boston.

On her website, Hiromi explains that this experience exposed her to a wide range of music genres, all of which she appreciates and enjoys listening to. While her music continues to draw from jazz influences, she explains that it doesn’t fit into a traditional genre.

“Another Mind,” Hiromi’s first album, was released in 2003 and awarded Japan’s Jazz Album of the Year Award. Accolades continued to follow Hiromi’s work with the release of her second album, 2004, which was recognized with the Horizon Award at the 2004 Surround Music Awards, Jazz Life’s Gold Album and HMV Japan’s Best Japanese Jazz Album, among many others. Hiromi has since released nine additional studio albums.

Hiromi will be playing with The Trio Project, featuring Jimmy Johnson on bass and Simon Phillips on drums, this Saturday at 8:00 p.m. at the Williams Center for the Arts. Tickets are $25.