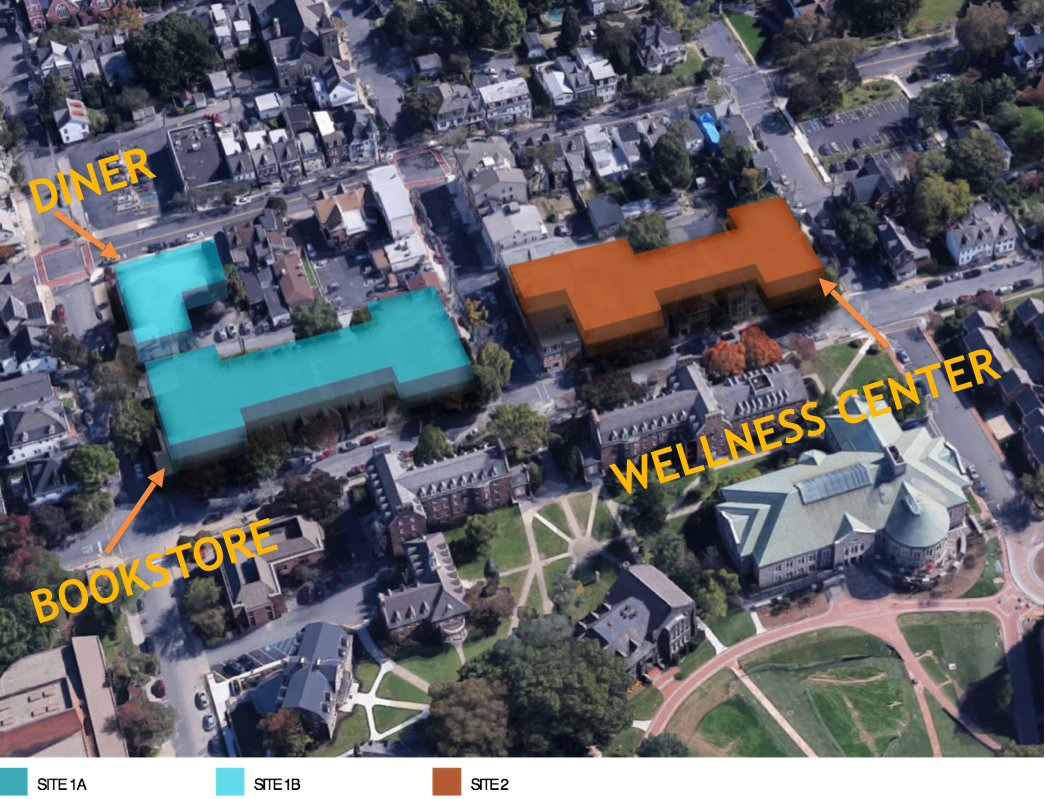 Proposed developments on McCartney Street. (Courtesy of the President’s Office)

Roughly nine months before Lafayette plans to break ground on major construction, the college released to Easton city officials at a City Council meeting a price tag and visuals for the McCartney Street residence halls.

The college’s developer for the site from Cattell Street to McCartney, EdR Collegiate Housing, estimated the cost for the hall at $46 million. The first floor plans include a college store, bookstore, coffee shop and diner. Vice President of Finance Roger Demareski said the look and price still very much in the infant stage.

The hall aims to house 550 students, the 400 new students and 150 students displaced by the razing of the houses on McCartney street and other potential developments. The new building will be the second installment in the college’s expansion plans, the first being the $75 million Integrated Science Center.

“[The hall] is not an insignificant investment, but it’s certainly one that we need,” Demareski said, adding that a normal cost per bed is $100,000.

Demareski said the college is still exploring options with EdR to pay for the hall, which may be separated into six buildings. Under one option which he said would be ideal, Lafayette could effectively split the costs with EdR so that the buildings would not be a liability for either side. Alternatively, Lafayette would have to pay for it itself.

Lafayette owns all of the houses that would require razing except the house at 203 McCartney St. and the building that houses Lafayette Cleaners, both of which Lafayette is under contract to buy.

In addition to the 400 new students coming in the next several years, approximately 100 students would require new housing after student housing is razed for the construction. Demareski estimates 50 more students will need new dorms because the college is also exploring making room for more student common spaces in places like Watson Courts.

Easton’s zoning code currently requires that buildings on this part of the hill not exceed 40 feet. Although the number of floors in the halls is not set, Lafayette has requested the city extend this limit to 55 feet. McCartney and Cattell Streets are separated by an alley, and on the Cattell side, Easton zoning permits higher, denser, mixed-use construction.

The goal for the requested zoning change is to apply those same requirements from the alley to McCartney, too, according to Demareski.

Demareski said he thinks the zoning changes will be fairly unobtrusive to the neighborhood.

“It’s focused on College Hill. It supports the expansion of the college. And the stronger Lafayette gets, the stronger the city gets,” said Demareski of the zoning overlay proposal.

Demareski said he sees no specific reason that the City Council would deny the proposed changes to the zoning overlay.

“I think we have a very good plan and a good relationship with the city,” Demareski said.

While the college awaits the City Council’s decision about the zoning change, they are moving forward with other parts of the expansion plan. The college also plans to add administrative space, more parking and a new science center, all to be located on and around campus.

Easton’s Director of Planning Tina Roseberry did not respond in time for comment.