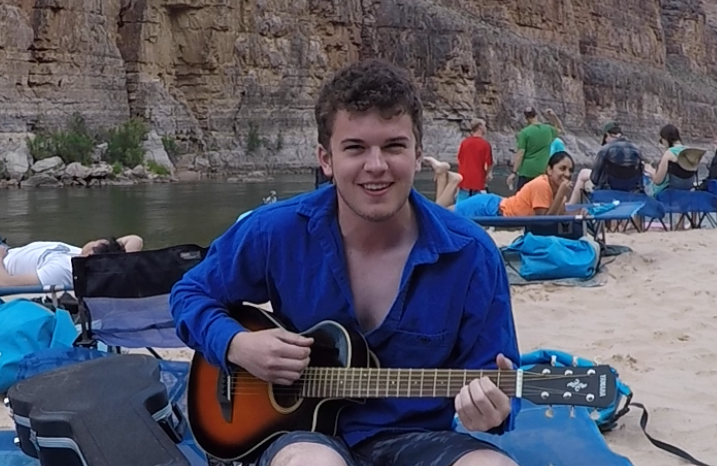 For those who knew him, there was no one else like him.

From his mint green shoes, to his flannel cap, to his unmistakable brand of humor, Joey Towers ’18 left an impression on those he met in a way that no one else could. Everything he said and did had a particular Joey Towers stamp on it, friends said.

Towers took his own life on Saturday in Easton. He was 20 years old. He was a mechanical engineering major, a Marquis Scholar and a brother of the Delta Upsilon fraternity.

His friends and fraternity brothers all described him as an incredibly dedicated friend, with an unrivaled sense of humor and sense of self.

“He had a very odd sense of humor that always caught you off guard and always made you laugh,” Cameron Bartlett ’18 said. “The thing that had initially drawn me to Joey, something that seemed to be at the core of who he was, was that he was someone who knew exactly what he believed in and would always fight for it. He never backed down from anything that he thought was right.”

Andrew Graves ’18 said that Towers had an unforgettable personality.

“His humor was unparalleled,” Graves said. “It was like his own specific brand that was completely original. I think that’s what I’ll miss most, you could tell when Joey made a joke or said a stupid thing because it had it’s own Joey Towers stamp on it.”

Julia DeFranco ’17 met Towers about a year ago. In the past year they became very close, she said. Towers often poked fun at her height, but never failed to make her feel cared for. He made her tea when she was sick and let her borrow his oversized pair of moccasins, two memories DeFranco immediately thought of when asked about their times together.

“He was very helpful and cared a lot,” she said.

President of DU Walker Jones ’17 said that Towers was a unique person, and his other friends echoed that statement. Graves described an idea he and Towers had for making their sophomore year dorm room into a jungle, complete with potted plants and jungle noise machine. DeFranco and Graves recalled several ridiculous outfits Towers wore to formals, from an ill-fitting camouflage jacket to a fake bird fastened on his shoulder.

Towers worked at a bike shop near his home in West Newbury, Mass. for years. John Onorati remarked how hysterical it was that Towers was always able to start a conversation with the line,  “This one time, at the bike shop…”

Bartlett reflected on how passionate Towers was about music. He said that some of his favorite times with Towers were in his room playing his multiple guitars and banjo, listening to Towers’ original music. He won the Greek Gods and Goddesses competition last spring with an original song he sang while playing the guitar.

Bartlett said that Towers’ sense of adventure took them places he otherwise wouldn’t have gone.

“Over fall break he took me to this abandoned World War Two bunker, and it was pitch black in there, and the walls were totally covered in graffiti, and we explored every single corner, because once we saw another door he was like, ‘Oh, we have to go see that now, I can’t not see what’s behind that door,'” Bartlett said.

Towers’ sense of adventure outside the classroom was balanced by a quiet but fervent intellectual curiosity demonstrated in the classroom.

Chemical engineering professor James Schaffer has a colleague who wrote his PhD on how you can tell a lot about a student based on where they sit in the classroom. Towers sat two-thirds into the back of Schaeffer’s classroom.

“He didn’t want to be in the spotlight, that wasn’t his thing,” Schaffer said. “He wasn’t screaming out the answers trying to show how smart he was. But he was really subtly interested. He was there by design, like everything else he did as a student. He was thoughtful about what he was doing.”

Jones said that he knows no one else like Towers.

“[He was] effortlessly creative and unique,” he said. “He was just someone who was such his own person that he just broke through anyone else’s preconceptions. From top to bottom, from his mint green shoes to his flannel cap, he was someone who just exuded a very particular spirit.”

A memorial service is planned for Saturday at 11 a.m. at St. Paul’s Episcopal Church, 166 High Street, Newburyport, Mass. The college plans to providing bus transportation for students who want to attend the services.

The brothers of DU have also set up a donation page in Towers’ honor for the Movember Foundation, which aims at suicide prevention and mental health awareness in the United States.

Editor’s note: The print version of this story misattributed the first quote to Walker Jones. It has been corrected online to attribute the quote to Cameron Bartlett.

Joey’s loss came as a shock to this alumus (Class of 73). Lafayette is a tough place, academically, with easy ways for staff and students to misunderstand unclearly expressed goals. Some students are “shining lights”, by their talents earning and deserving Dean’s List and Academic prizes. If you add to this pressure cooker, the twists and turns of growing up, between the ages of 18 and 22, you have a great load of cares. My Lafayette experience included disappointments and mistakes, lost loves and several disastrous grades. All of that was normal, in part for wanting to be challenged rather than going to my third or fourth-choice colleges.

There are some things that can be done at the administrative and department levels to assist students through their college years. Professors should continue to maintain the powerful student-teacher tradition and impart specific professional curiosity and intellectual disciplines of their fields. Some students may shine but all students will be met where they are and be shown how to be and do what they are learning. Administrators could come out of their offices and each could take a personal interest in any student
along the way to work or at the dining hall. Respect, understanding and teambuilding aspects should be reviewed and constructively revised in FreshmanOrientation, The Student Handbook and in college advertisements. Lastly, the College should review active rolls of religious worship and fellowship on campus. A lively religious community will serve every person in keeping clear individual perspective, confidence, kindness and decency.