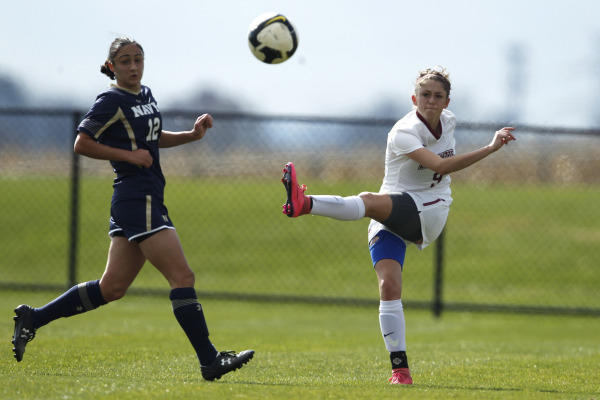 The win puts them at sixth place in the league. The top six teams at the end of regular season move on to the Patriot League Tournament. A win against Colgate on Saturday night in Easton would clinch the Leopards a spot in the tournament for the first time since 2011.

The first 90 minutes were played rather evenly, but after two scoreless halves the Leopards’ leading scorer, senior forward Melissa Lynskey, found the back of the net for her eighth goal the season. The goal came just 33 seconds into the first overtime period after forward senior Kaelin King pressed the Navy goalkeeper, forcing her to kick a ball off the legs of her defender. Lynskey then gathered the ball and placed it past the keeper.

“We knew it was an important game coming into it and so to be able to score the game winning goal in such a big game with high stakes was such an incredible experience,” Lynskey said. “Words can’t describe it.”

It was another big game for the Lafayette defense, who has only surrendered one goal in the last four games. Both keepers, senior Danielle Sedillo and junior Kelly O’Brien, recorded one save a piece. Despite being outshot 18-8, the stellar Lafayette defense, led by junior center back Olivia Heitz, allowed just two of the Navy shots to be on goal.

“She really kind of leads them back there,” Lynskey said. “She’s a very good player, and she keeps them organized.”

“We’re all really excited coming off of this momentum from such a big win like Navy,” Lynskey said. “It gives the team confidence to know that we can compete with these higher ranked teams and that we’re good enough to win.”

Saturday is also senior night. Lynskey said that she believes that will add to the emotion and excitement of the night, but they will need to keep those emotions in check. This will be necessary as the seniors will look to accomplish something they have not in their past three seasons — beating Colgate. Colgate currently sits in the fifth spot in the league, with a 4-4 record in the conference and an overall record of 7-7-3.

As the Colgate game sits in the future, the Navy game is certainly not something Lynskey will soon forget.