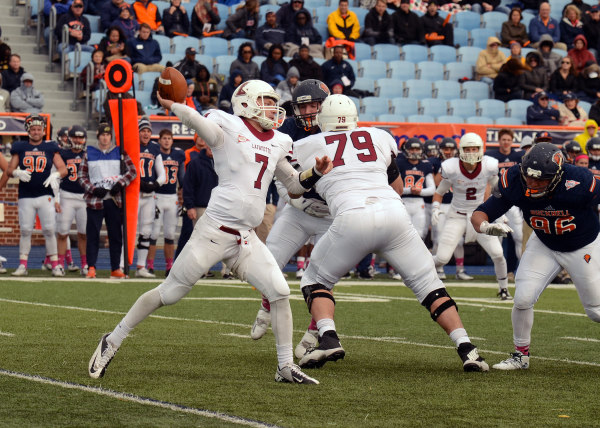 After the defense allowed more than 40 points for the third week in a row, it’s safe to say that the Leopards’ season has reached rock bottom.

In a must-win game at conference rival Bucknell, the Leopards fell apart in the fourth quarter and lost, 42-17.

After the Bison went up 21-3 in the third quarter, Lafayette scored twice in the span of one minute to get it back within four points. Unfortunately, the defense could not hold on as the Bison scored on three straight possessions in the fourth quarter to seal the victory.

Rush defense was a problem again for the Leopards as they gave up 259 rushing yards. Like many envisioned, the season ending injuries to junior Brandon Bryant and other starters are certainly hurting the Lafayette defense.

“We lined up last Monday with 57 players [the team has 80 players],” head coach Frank Tavani said. “Say what you want but that’s a challenge.”

On the offensive side of the ball, both quarterbacks were unable to get the ball moving. Senior Drew Reed started the game and, after an ill-advised interception, senior Blake Searfoss relieved him of his duties and played the final two drives.

“Football is a grind game, and the only way I know after 40 years of coaching is keep grinding,” Tavani said. “I still have confidence in them that they’ll put a game together.”

One bright spot for the Leopards was freshman Mike Dunn. After playing on the defensive side against Army, Dunn returned to his natural position of running back against Bucknell. He finished the game with 58 yards on ten carries, which was one of the best rushing performances for a Leopard this season.

This week the Leopards return home to Fisher Field for the first time in four weeks to take on the Georgetown Hoyas, in the second-to-last home game before Laf-Lehigh on Nov. 19.