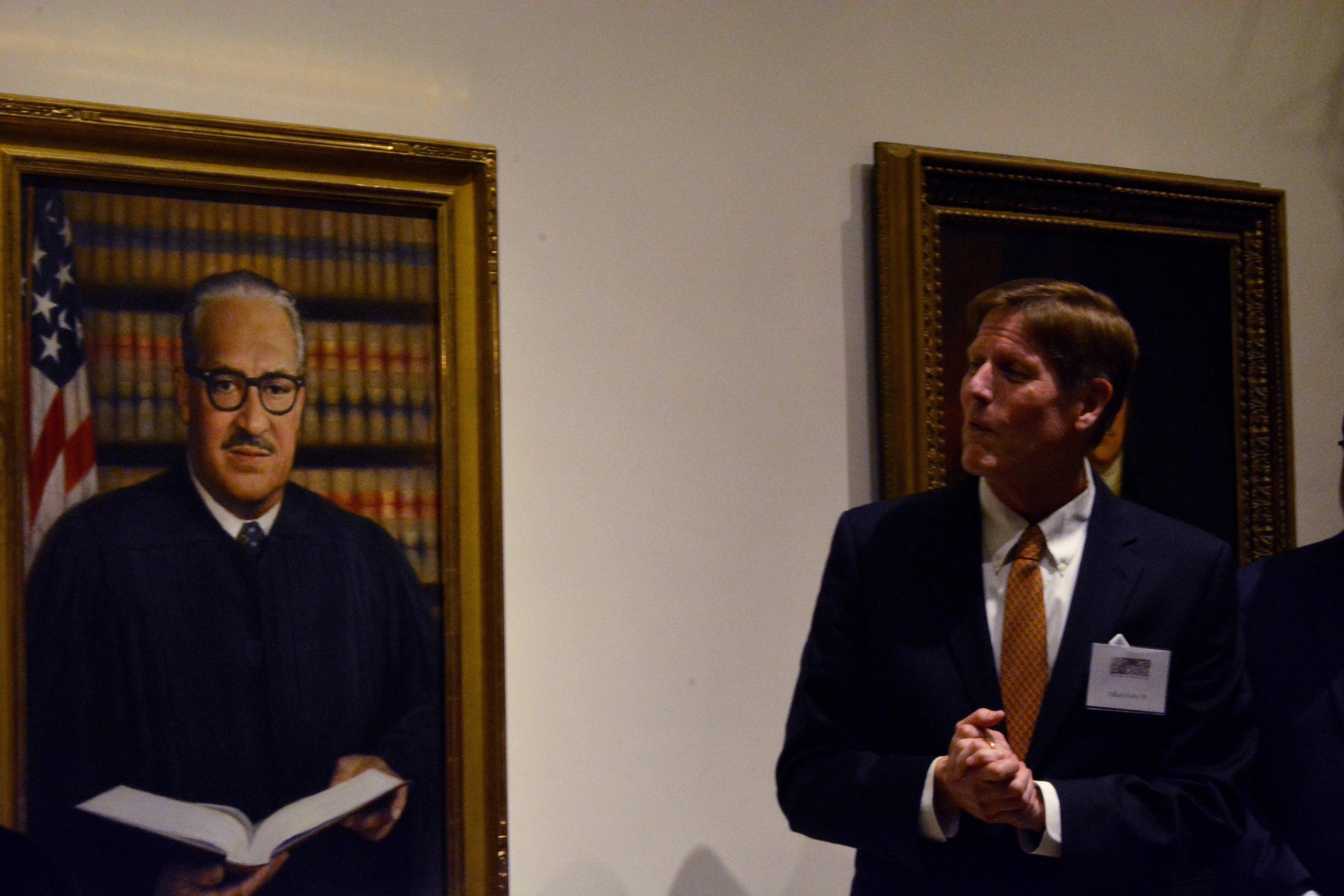 The first portrait of a nonwhite person in the Kirby Hall of Civil Rights was unveiled on Monday, and student government president L’Eunice Faust ’17 said it was long overdue.

“In 2009, students here fought to make this building more reflective of Lafayette,” Faust said, referring to the outrage sparked in 2009 by the wording of Kirby Hall’s original dedicatory plaque, which referred to the building’s purpose as a place where “Anglo-Saxon ideals” would be taught.

“They challenged administration to look at Lafayette’s mission and to walk the walk, not just talk the talk,” she continued in a speech at the event to unveil the portrait of the first African-American on the Supreme Court, Justice Thurgood Marshall. “I hope that students continue to fight that fight, and I take this dedication of Justice Marshall as a sign to the College’s commitment to not only embracing, but providing resources and growing diversity here.”

Award-winning portraitist Ying-He Liu, who painted Marshall, reflected on her own civil rights struggles and discussed living the first 28 years of her life in China when she spoke at the event. Liu said that Marshall was one of her heroes.

“Only about five percent of the population [of China] could have the privilege to go to school,” Liu said, “and I literally had to go to a private studio to study, and I had to teach myself English. I really know what it is like to live under oppression.”

Liu then touched on the process she went through in constructing the portrait, in which she talked about the references she used to create the image of Marshall.

“I saw exactly what she had intended to do [with the portrait],” Government and law professor and Fred Morgan Kirby professor of Civil Rights Bruce Murphy said in an interview. “She consciously tried to make [Marshall] look younger, and she wanted to show him as a vital young man before the burdens of that journey [of his career].”

The portrait was commissioned and donated by the Kirby Family and the F.M. Kirby Foundation.

Murphy gave a speech which touched on the highlights of Marshall’s career and the struggles he faced, and offered Murphy’s take on why a portrait of Marshall belongs in the Kirby Hall of Civil Rights.

“His transformative work on behalf of civil rights as the NAACP legal defense attorney, combined with his second 24-year career on the Supreme Court on behalf of the same goals, sets him above the many other deserving candidates for display in this remarkable building where Civil Rights is taught and studied through the lenses of both politics and law,” Murphy said. When he was with the NAACP, Marshall argued before the Court in Brown v. Board of Education and played a large role in ending legal segregation in public education.

According to government and law professor Ilan Peleg, the idea for the portrait of Justice Marshall originated about three or four years ago. Peleg said he had been in communication with Director of Lafayette College Art Galleries and Collections Michiko Okaya, and Jeff Kirby ’84 of the F.M. Kirby Foundation for some time before the project came under works.

In his remarks at the event, Peleg talked about how the government and law department has increased diversity over the years.

“When I joined the department in 1974, I was one of six white men,” Peleg said. “All of us got along with each other really well, but it still was a very much undiversified department. We have today a diverse government and law department, with five women, including our accomplished department head Helena Silverstein, and faculty born in Asia, Europe and the Middle East.”

The portrait is now displayed on the second floor of the Kirby Hall of Civil Rights.