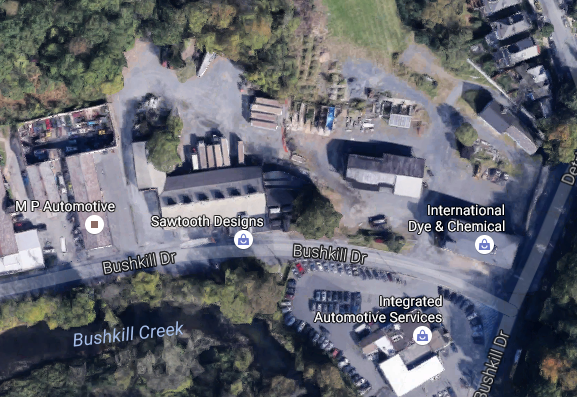 Location of the parking lot by the forthcoming Bushkill Campus. (Google Maps)

As a part of the college’s expansion, plans are underway to build a 302-car parking lot on Bushkill Drive to accommodate the growing number of students.

Vice President of Finance Roger Demareski sees the future Bushkill Drive lot as a place for long term parking, with the planned increase of nearly 400 students at the college in the next ten years.

“Many schools…have remote parking lots on the edge of their campus that allow for students to bring a car, because we know that’s important to a lot of students, but don’t want to have that car necessarily occupy a space on the core part of campus and just sort of sit there for long periods of time,” Demareski said.

“The core campus is more in and out parking, very transit parking,” he added. “And you think about your edges more in terms of residential parking.”

This move comes as a larger plan to expand the use of several acres of land Lafayette owns on Bushkill Drive to become the Bushkill campus. Construction is set to begin this summer.

Two vacant buildings, formerly the site of Hummel Lumber and M.S. Reilley Recycling, will be demolished to make room for the lot, according a recent article in The Morning Call. The college also plans to move facilities operations and public safety to the Bushkill campus. In an interview last semester, Demareski said that the two buildings would be renovated for facilities operations and public safety, and that renovation would save the college roughly $1 million.

“We are trying, as best we [can], to create and maintain a pedestrian core on campus,” she wrote in an email. “Just a couple of years ago cars were parked all along a road that circled the Quad and now I believe it hard to imagine cars in that space.”