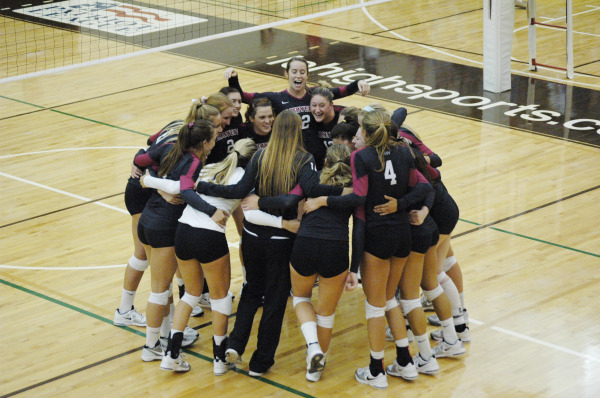 The team huddles before a match against Lehigh earlier in the season. (Courtesy of Athletic Communications)

After losing six straight matches — winning just one set in those games — the Leopards faced off against rival Lehigh in dire need of a victory.

Despite putting together one of their best offensive performances all year, the Leopards fell to the Mountain Hawks in five sets on Tuesday night at Kirby Sports Center. The match marked just the second time Lafayette played to five sets against an opponent this year.

“We definitely had a lot of energy going into the game and it increased throughout the sets. Playing Lehigh is always a huge fight,” senior Jet Manzi said.

Junior Lizzi Walsh lead the team with 17 kills and senior Katherine Stevens followed closely behind with 15 kills – both of which were career highs. Maria Balus finished the night with a double-double after posting 45 assists and 16 digs.

After a tight opening set, the Mountain Hawks got the better of the Leopards, finishing on a 8-2 run. The Leopards responded in the second set, besting Lehigh 25-18. In the third set, Lehigh scored 13 unanswered points to win the set 25-17. But Lafayette held strong in the fourth set with senior Kelly Flynn delivering a pair of clutch kills. With a 25-23 finish the Leopards were able to force the match into a fifth set, but Lehigh outlasted them in the final set to take the match.

The first time the two teams met this fall, Lehigh bested the Leopards by a score of 3-0.

With seven Patriot League matches remaining, the Leopards will look to continue this improvement as they enter the final stretch of the season.

“It gives us the confidence going forward that we are a different team than the first round of Patriot League, and we can definitely not only hang with these teams, but also take sets and take matches from them,” Manzi said.

Lafayette will return to Kirby Sports Center this weekend when they take on American on Friday night and Loyola on Saturday afternoon.