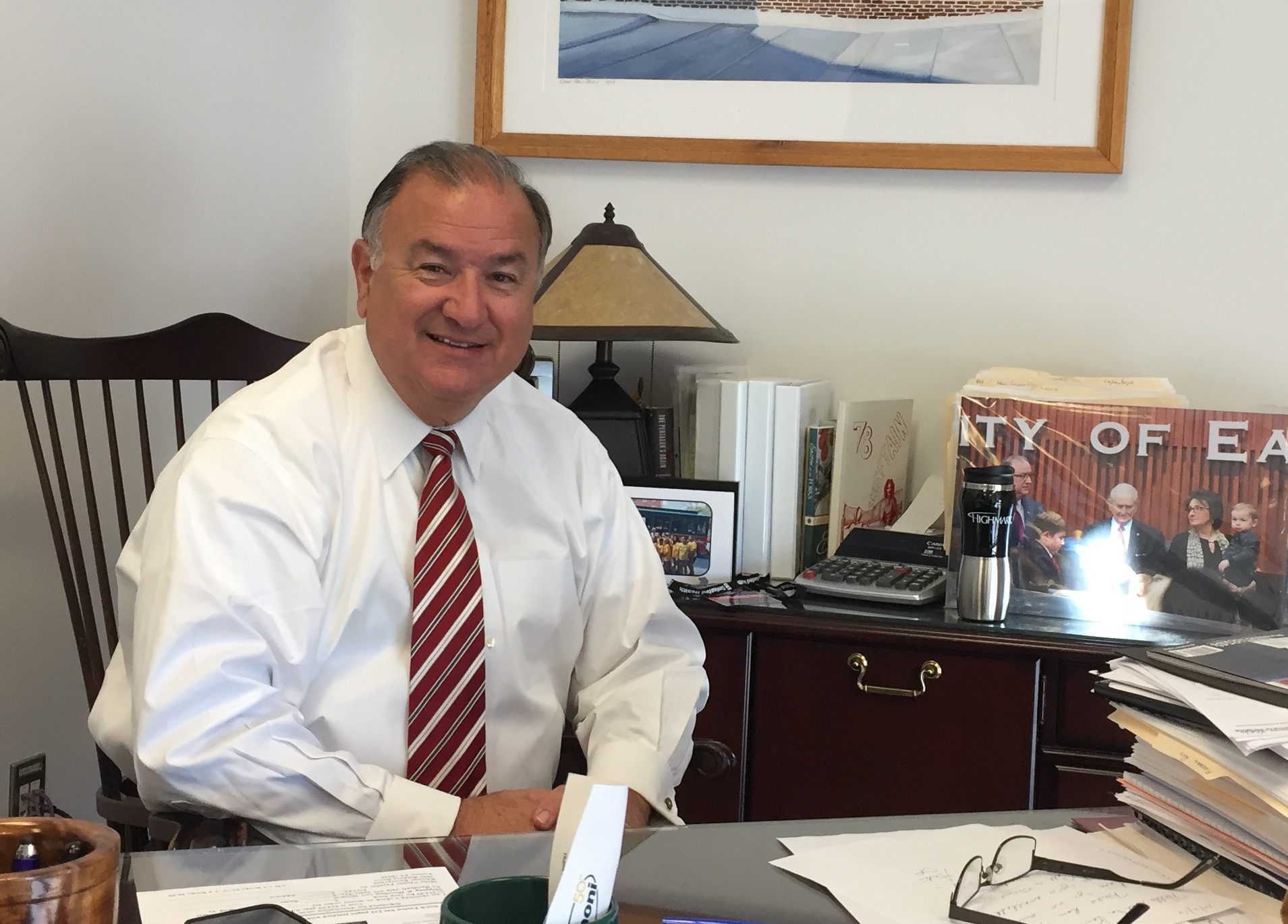 Easton Mayor Sal Panto, Jr. recently moved his offices from the Alpha Building in Centre Square to a new building on Third Street.

Then for the first time, 85 Lafayette staff members moved into the Alpha Building as part of the college’s restructuring.

Now, with Lafayette planning to break ground next summer on construction that stretches further into Easton, Panto is making more decisions about the Lafayette-Easton relationship.

“There’s no doubt in my mind that if we were not a college town,” he said, “we would be just another small borough. Not even a city, just a borough.”

The Lafayette sat down with him to understand his role and opinions in the expansion process.

Editor’s note: The interview has been edited for length and clarity.

How has the relationship with Lafayette changed since your first term as mayor in 1984-1992?

When I was here last time, it was horrible, absolutely horrible. Lafayette basically told students not to go downtown, although there were some bright spots. They helped us with some renovation of the Grand Eastonian, but for the most part, the college was up on the hill and didn’t come off the hill.

Do you have an idea of why that was?

At the time, in the eighties, you had two presidents who were community-minded, but not so much interested in making sure the community was a better community. And now today, most people realize that it’s not just the college that students come to college for, they come for the town also. They want things to do, experiences to have, and that wasn’t the case before.

Students didn’t come off the campus because they were told not to: ‘Don’t go into downtown.’ President Arthur Rothkopf, when he was here [1993-2005], was a much more visionary person, but colleges and universities across the country are doing more for their towns.

How do you envision your role as mayor when dealing with the college?

A collaborator. I think the college is vital part of the community, it’s our largest employer. It’s our largest taxpayer, even though they are tax-exempt. And what they’re going to do on College Hill is very important to that neighborhood.

Can you explain how Lafayette can be the largest taxpayer but also tax exempt?

It becomes a little bit onerous for people to understand, but the campus is tax-exempt for all the buildings on the campus. But with many of the buildings off campus, they pay taxes on because they’re not used for educational purposes.

They’re also the largest employer, and employees in Pennsylvania pay an income tax. That comes to the city. That’s a sizable amount of money, especially when you consider what professors and staff people make versus what a factory worker or a textile worker may make.

I support it 100 percent, because the college is like any other business entity. If I look at the business side, they need to grow, and they can’t remain stagnant. With the number of students wanting to get a good education at lafayette, they’re turning away more and more every year.

If I put my Lafayette hat on, it’s from the view that you need to grow. And from a city point of view, it’s more tax dollars.

What are the main arguments against Lafayette expanding?

Taxes. The reduction of taxes, taking tax retables off the market, off the tax rolls and being tax exempt.

Editor’s note: Buildings within the core of the college do not pay property taxes. Currently, Lafayette pays taxes on all off-campus houses, but the four-story residence hall planned to be built on McCartney Street would be tax-exempt if maintained by the college.

Is that a legitimate argument?

I think it’s legitimate if you don’t look at the whole picture. When you talk about the money that comes off the tax rolls, I think it’s more than compensated in other ways, namely in the earned income tax. The earned income tax on a professor making $200,000 a year is 2 percent, so it’s $4000. Most of the houses we’re taking down don’t pay that. So, if you hire one person for every two houses, you’re even.

Is there anything specific in these expansion plans that you want to see done?

Good street design is my main goal. It has to be a betterment to the neighborhood, not a deterrent, and I think the college is working towards that.

If there were to be something that “goes wrong,” what would it be?

We know there are going to be the dissidents. You’re just going to have that, and we can talk politically and say that’s what’s great about America, but a couple people can stifle any growth. I think that’s why the college is looking to stay within their zoning code and planning code, and land development ordnance so that there’s as little resistance as possible.

This summer there was also the announcement of the elevator.

Yeah. Not that traversing the hill without having to walk it is not a good idea, because I can’t walk it anymore. What I suggested to the board of trustees is that you need these residence halls, why not get the city to vacate that private road back there [Bushkill Drive]. Really it just serves a couple neighbors, let them come in from the other side. And maybe you need to take down The Spot or add to The Spot and go up seven or eight floors. Then you just walk across.

You have to put an elevator in, now you have a reason to have an elevator, rather than having just an elevator, which to me does not make use of the $9 million. Put $10 million in or whatever it is to build another dormitory which would still do the exact same thing. I also liked the idea of bringing back the trolley going up the hill.

Because the elevator, looking at where it comes out on the campus, I don’t see neighbors using it. If it becomes just one big elevator, we can make it a tourist attraction, going up there and having a great view of the city and get some nice photos. But, I think there are other ways of doing it.

You said it’s a waste of money, but it’s not Easton paying that money. It’s mostly Lafayette and the state?

It’s mostly Lafayette and the state.

So that’s why you would be okay with it being built?

Exactly. It’s not my money, but if I were on the board of trustees, I would be looking at a way to maximize that elevator. If they really want to do something for the neighborhood, the elevator has to get somewhere closer to Cattell Street, and it’s not going to get there.

It seems like in tandem with these expansion plans, Easton police are now going up to College Hill more. What does that mean about how the police interact with College Hill and students? It seems like there is something changing.

I don’t know that it’s changing. It’s just that there are certain days when we need bigger police presence, and we’re working with the college not just on police presence, but on public works, et cetera. There are a couple events where the streets are trashed, litter all over the place. Then, the neighborhood wakes up the next day and there are cups all over the place.

The jaywalking is just a safety issue. We see more and more students just crossing in the middle of the street in between parked cars, and it’s just not safe.

We haven’t had a lot of trouble with the drinking, but I think the college just wants to make sure that they have a handle on it.

As a final question then, you may have been reading about this around the country, but we had a bit of a clown “scare.” Has Easton had anything like that?

It seems reasonable that a clown could come to Easton just as it has to State College and Bethlehem.

Well, it depends. I know some clowns who are great people. If someone comes in a clown outfit given the height of the awareness of the problems around the country, our police would probably stop and ask questions. If they’re on their way to a birthday party for a 12-year-old, that’s one thing. But until they commit a criminal act, there’s nothing criminal about wearing a clown costume.

Do you have any opinion about the nationwide clown fiasco?

Do you know what? It’s like responding to nationwide racial problem with policing: we don’t have that problem and thank God we don’t. The police department and I have been very active in the community, we’ve gone to many forums on the topic. My only concern with police relationships with minority communities is really that somebody says, ‘Well, we must be bad, too, because this is what’s going on in the country,’ so they start emulating what’s happening around the country.

We’ve never been a segregated community. College Hill was probably the one that was the upper-middle class, white neighborhood for a long time. Not anymore.

Interesting point by the mayor on the elevator. I agree with him. Please everyone take a deep breath and decide if this is the best use of 10 million dollars. It always should be about best use. If even the mayor thinks this is foolish we should rethink this!!!

Are you going to review force policies with the Easton police force?