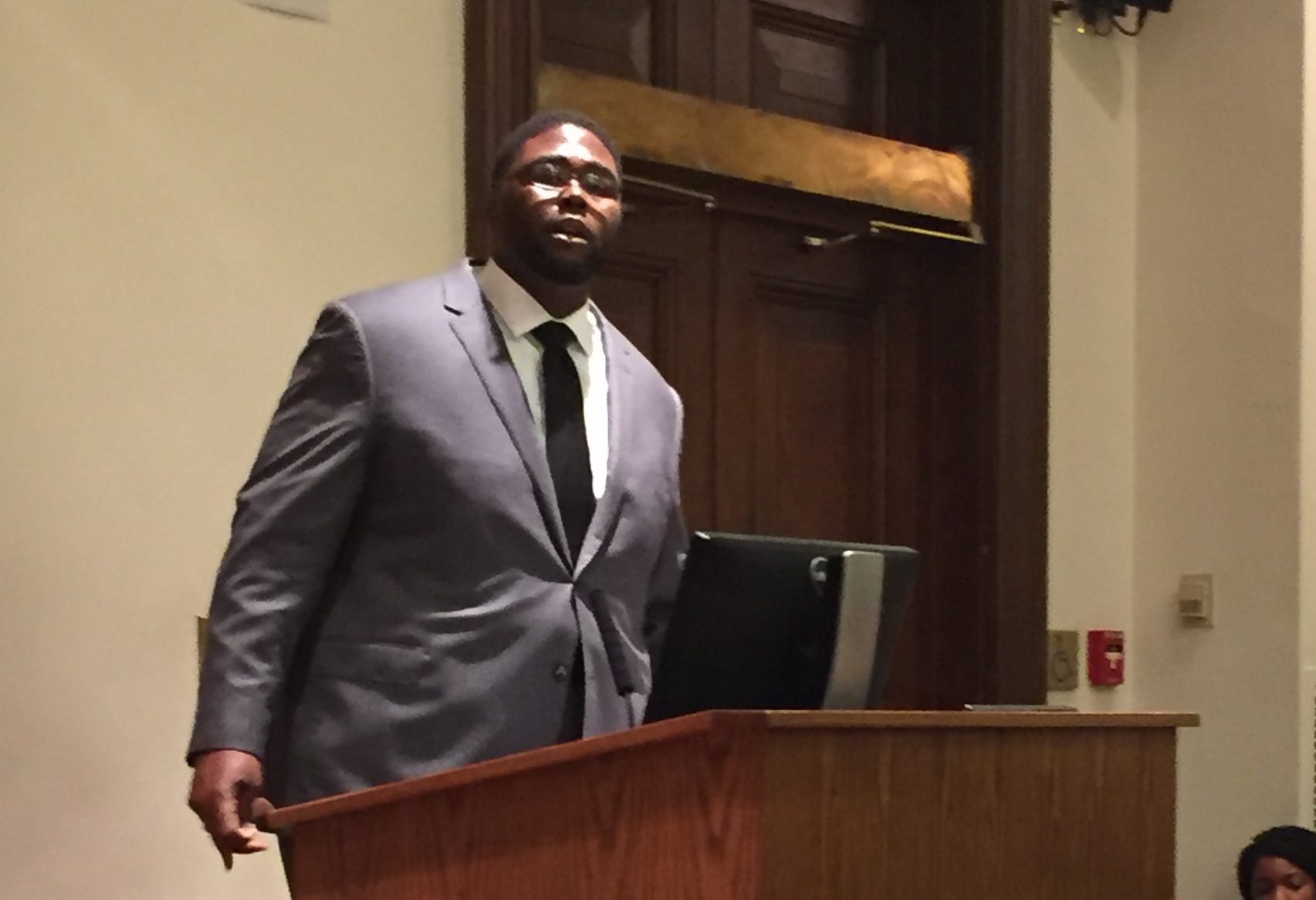 Anthony Jack speaks in Kirby Hall on being a poor student at a rich school. (Adam Finkelstein ’20)

Anthony Jack, a junior fellow at the Harvard Society of Fellows, visited Lafayette College last Thursday and spoke about what it means to be a poor student on a rich campus.

Jack said that depending on a student’s background, he or she may be as many as four years behind in their education. In his talk, Jack referred to 103 interviews that he conducted with undergraduates, two years of ethnographic observation and his personal experiences.

Lafayette College ranks 133rd on the New York Times’ College Access Index, which compares colleges and universities on their economic diversity. When the ranking came out last year, President Alison Byerly forwarded it to the board of trustees.

The Lafayette sat down with Jack afterward to learn more about his motivations and vision.

How would you explain a topic like this to younger kids?

I would probably use a sports metaphor or an instrument metaphor. It’s like, you have an aspiration to play the piano and you’re competing against people who have been playing four years longer than you. Or I’d use a football analogy… it’s like the difference between having too many practices before the season starts opposed to those who don’t, or having a different style of practice. It’s not that they can’t do the work, it’s that they are not accustomed, or haven’t been asked to do the work in this particular way and that’s the biggest difference.

Let’s think of it outside of education, let’s think of it as far as learning an instrument. When you learned your instrument did you need to leave your house to do it? Did you have to travel an hour way or maybe was the instrument not as good? Or did you have a baby grand piano in your downstairs living room? It’s like anything: if you have it at home, and you see it every day, when you go to school and they actually do the exact same thing, you are more accustomed to it. But if you’re coming out of an environment where the thing you are asked to do – and you are asked to do it drastically differently at home – and when you enter that new environment it becomes hard. It’s an adjustment period that needs to be had.

Could you please go over what social capital is?

A way to think about how certain behaviors are rewarded. It’s the stuff we take for granted that gets rewarded. Like being proactive is expected, but it’s never said. So people who are proactive get more. It changes by context so what’s taken for granted in Easton is different than what’s taken for granted even on campus. The ability to automatically have your actions align with what is expected. That gives you access to resources.

How do you think the transition differs from becoming an undergraduate to becoming a graduate student?

Graduate school is a very big adjustment because you go from being a consumer of knowledge to a producer of knowledge. And there is less guidance on what you have to do to succeed in graduate school than in undergrad. So it makes navigating that hidden curriculum even harder. Think about it. Business school and law school programs you get in and you’re out and you pass your exams, you do all of that stuff, bye. PhD? It’s do these courses and then write a paper, publish a paper, write a dissertation, or publish a book. How the hell do you do all of this stuff on your own?

What is the best advice you have given to undergrads?

What are your proudest moments?

Oh, wow. Probably handing my mom my diplomas each time that I walked across the stage. That was really, really important to me because a lot of what I have been able to do was because of her hard work and sacrifice. And the night that I became a junior fellow at the Harvard Society of Fellows because of the historic moment of being one of five since 1933, and they had 12 a year. The New York Times op-ed was kind of cool, too.

What was it like for you to work four jobs in college and balance everything else?

It was hard emotionally and physically but it made me hyper-organized. And the semester I had four jobs, I got straight A’s, but I did not have much of a social life. It prevented me from socializing in a way that my other friends did. I missed the John Legend concert, I missed Busta Rhymes, I missed out on a lot of bonding experiences that my classmates – that we talk about now as like, ‘You remember going to that concert?’ and I was like, ‘Well, I didn’t go.’ It was what I needed because I was doing hurricane time. And I’m from Miami like I’d be sending money home and I needed to work extra hours. I was motivated to make sure that my family had what they needed and I had what I needed.

How does your upbringing help you connect with undergrads?

View all posts by Adam Finkelstein →