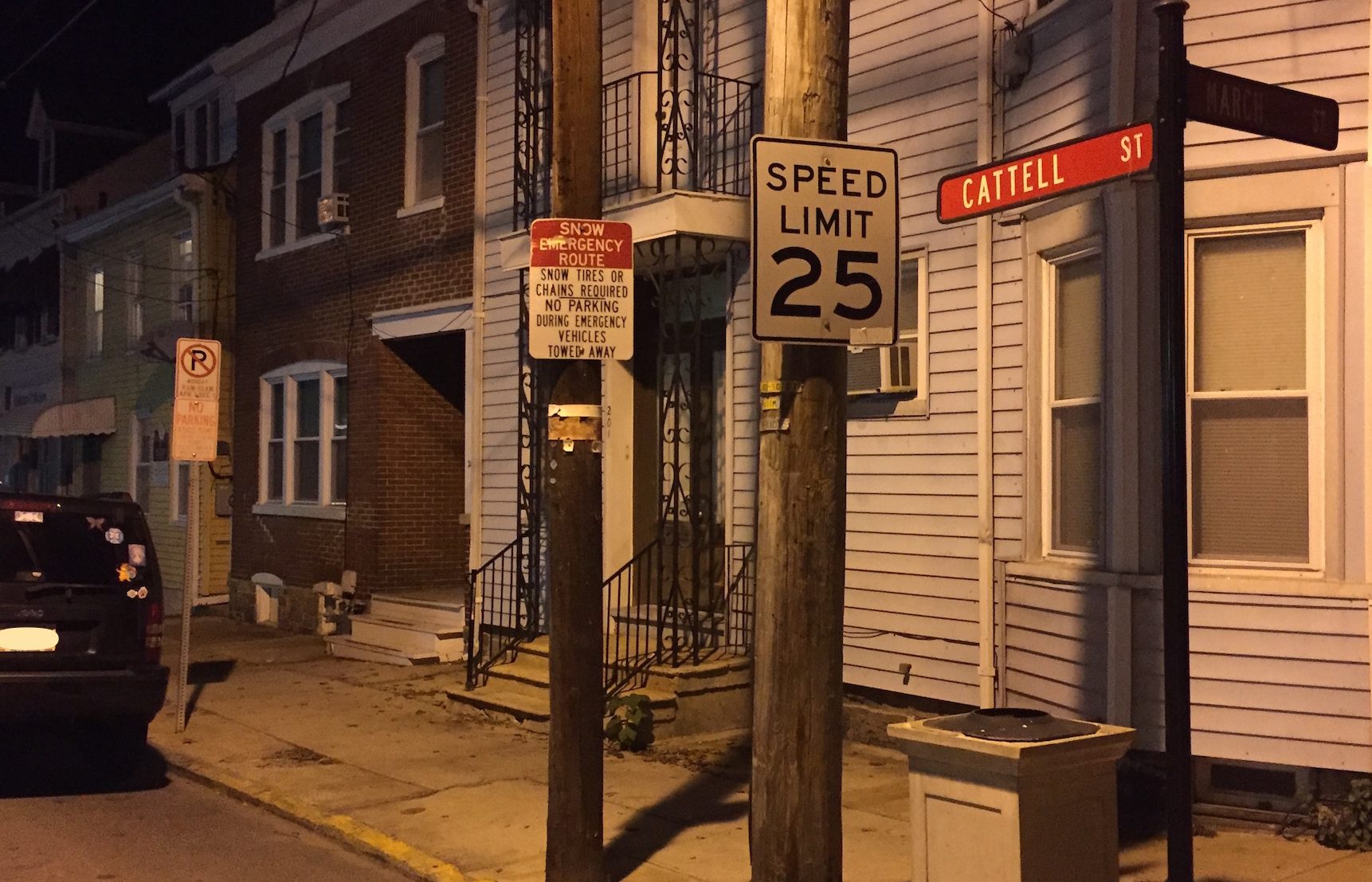 The intersection of March and Cattell Streets. (Ian Morse ’17)

The shift is the second part of a two-year, $35,530 grant the college received from the Pennsylvania Liquor Control Board to curb “high-risk” drinking, or drinking that may threaten drinkers or their surroundings.

As the grant enters its second year, McLoughlin has increased liquor law enforcement on College Hill, citing “dramatic” decreases in liquor law violations since the introduction of a college plan to decrease high-risk drinking.

In the 2015-16 academic year, Lafayette used the grant to fund public safety and Easton police officer visits to almost every off-campus house. This year, McLoughlin has requested that Easton police make more frequent patrols on College Hill on certain high-risk weekends, like Homecoming and Laf-Lehigh. He would not give details of any other dates of increased enforcement, saying that unpredictability is key to effectiveness.

“We’ve been lax with intoxicated persons historically up there [on College Hill], as long as affected parties were addressed and when students were sent home, they stayed home,” Weber said.

“Most [officers] who were working the sectors on College Hill would just see a kid who’s slightly intoxicated walk by,” Weber added, “and think ‘it’s college,’ as long as they were not at risk to themselves or others.”

“This year I suppose the lines have changed,” Weber continued. “Where that kid who we would normally just look at probably should be stopped, talked to and evaluated by the police, the decision to arrest would still be up to the officer.”

The college began to explore a strategic plan to tackle high-risk alcohol consumption in 2012, after Everett Glenn ’15 died from alcohol poisoning in May 2012. At the Laf-Lehigh game the next semester, McLoughlin said he received complaints that he had created a police state because of the changes to the alcohol policy.

McLoughlin said that surveys sent out to students over the years consistently say a high proportion are against high-risk drinking, and that some would even prefer to have no drinking on campus.

“There was no student that we encountered through focus groups, through surveys or even just casual conversations that said, ‘We want students who are intoxicated in our residence halls, waking us up at two in the morning, puking in the halls, puking in our bathrooms, making noise, vandalizing the bulletin boards,” McLoughlin said.

In addition to more alcohol violation enforcement and continued education, McLoughlin and Weber said that they want to also focus on “mid-block” crossing, or jay-walking on Cattell Street because of the danger of intoxicated students on a dangerous street.

“When classes are in session, the parking gets more congested,” Weber said. “There’s more pedestrian foot traffic and the mid-block crossing becomes far more dangerous, because the speed limit on Cattell Street is 25 miles an hour but, I’m going to have to admit to the fact that that’s rarely ever followed.”

McLoughlin noted that he would like to see some crosswalk signs on the corners of Cattell Street before this summer’s work on the Lafayette’s new construction projects.

Weber said that there was no catalyst for the new jay-walking enforcement.

“There was no incident that said, ‘Hey, this is really dangerous. We need to do something about this,'” Weber said. “We’d like to get this taken care of before there is an incident of that nature.”

Weber said there were no jay-walking or public intoxication citations on Homecoming Weekend, the first weekend of major enforcement related to alcohol awareness policies.

McLoughlin said he has received no student complaints about increased enforcement on the Hill.

The Lafayette spoke to several students who also said they had no complaints about the new policies.

While I believe Dean McLoughlin’s decisions to be well-intentioned, I worry that he’s missing the central cause of “high-risk” drinking. Everett Glenn died because he was pressured into drinking heavily by Greek Life – specifically the fraternity Delta Upsilon. The Greek system in general got off with a slap on the wrist, and in fact the administration is working to bring more fraternities back on campus. Why must the entirety of the campus endure this so-called police state when the culprits are in plain sight?

I would like to rescind my assertion that it was largely Delta Upsilon to blame for the death of a student. Instead, blame should be placed equally among Greek organizations for his tragic passing. It remains my belief that the Lafayette community would be ultimately safer without the influence of Greek Life.