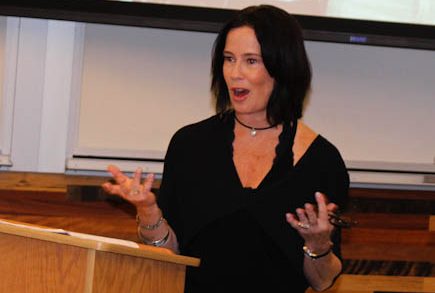 Sometimes potential can only be realized through passion.

At least that’s what Sally Lou Loveman ’84 said on Monday when she kicked off the new Lafayette Women Rising lecture series, which focuses on women in the workplace and how to excel in any career field. Loveman’s lecture was entitled “Careers That Make Sense,” discussing how her career path resulted from following her passions and realizing what she loves.

Loveman was an audience producer for “The Oprah Winfrey Show” for a long time before she founded her company lovespeaks, in which she focuses on discussing talents and connecting it to a career path and life in general. That’s also exactly what she did in her lecture on Monday.

During the lecture, Loveman explained her rise in her career and how she knew what she wanted to do. She said that attending “The Mike Douglas Show” in 1976 and seeing a female producer – without knowing what a producer was – behind the scenes as the inspiration to her career path. Women were not as prevalent in the workforce in 1976, she said, and seeing this woman changed Loveman’s life.

With the rise of her career, Loveman also discussed her shortfalls, saying, “It’s the fall that allows us to rise,” and in that fall, you are able to “find your real, true authenticity.”

Loveman also said the audience should find what they like or enjoy to do. Use your sixth sense – your gut instinct of “knowing” – will help one find his or her passion and career, she said.

The power of self-acceptance and realization is the key to accomplishing your goals, Loveman added. Owning up to one’s strengths makes life and one’s path to one’s career easier, according to Loveman.