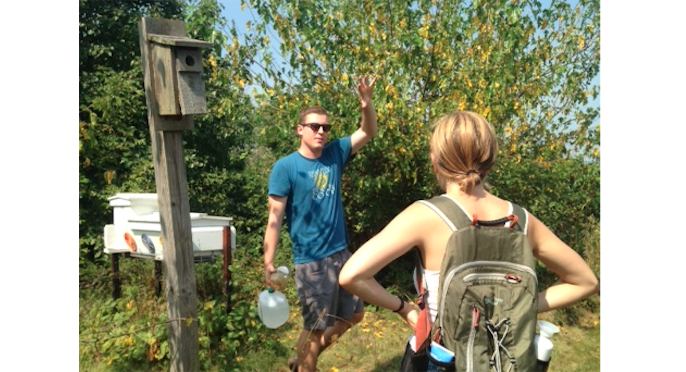 At a recent meeting of the Lafayette sustainability committee, it was announced that the college has changed the pesticides used on campus. Peter Todaro ’17 has been fighting for this change for over a year.

According to Todaro, the school had been using Imidalcloprid, which is part of the neonicotinoid chemical class. Neonicotinoids are nicotine based insecticides, which have been linked to causing worker bees to die out from the colony, otherwise known as colony collapse disorder.

The disorder has been related the loss of honey bees in North America, which decreased roughly 23 percent in the U.S. between 2013 and 2014, according to the Bee Informed Partnership, an organization dedicated to working toward understanding declines in the U.S. honey bee population. Todaro said the link between the pesticide and colony collapse disorder prompted him to take action.

In the spring of 2015, Todaro decided to petition the school to stop using neonicotinoids and switch to a new pesticide. He tried to enlist the help of other students, along with faculty and staff.

“I was able to garner close to 300 faculty, staff and student signatures, which I then handed into the President’s office before the end of the year,” Todaro said. “The letter and the petition were basically saying, ‘Hey, we need to stop using neonicotinoid pesticides. Here’s a list of cities that are [banning] it, here’s a list of schools that are [banning] it. We should stop doing that as well.”

“Peter has been a real champion of a change in Lafayette policy,” Lawrence said. “I think that is a very good thing for the college.”

Lawrence said that neonicotinoids are not something that should be used on the property of any institution that cares about the environment.

“Quite a lot of scientific evidence has mounted to show that neonicotinoids are bad for pollinators, and we have seen some dramatic change in pollinator populations in the United States,” she said.

“One of the causes that the science seems to be pointing to is the use of neonicotinoids as a pesticide,” Lawrence added. “Pollinators are critical to lots of different foods that we commonly eat. Not using neonicitinoids should be a priority of any institution that cares about those sorts of concerns.”

After a year and a half long process, Todaro said that he learned in August that the school would stop using neonicotinoids on campus.

At the end of last semester, the sustainability committee learned that Lafayette had hired a third party to take care of landscaping and that this company, BrightView, had been put in charge of spraying pesticides. This was no longer the job of Lafayette College Facilities Operations.

BrightView did not respond in time for comment on whether it uses neonicotinoids at Lafayette College.

Todaro said that it took persistence, but he was able to get a meeting with Vice President for Finance and Administration Roger Demareski, Director of Facilities Operations Bruce Ferretti, Lafarm manager Sarah Edmonds, horticulturalist for BrightView Bill Page and Andrew St. Claire, an account manager at BrightView.

This past August, Todaro received word from Demareski that the school had opted for a package that did not include neonicotinoid pesticides.

“This is a major victory,” Todaro said.

Todaro also added that just because the school stopped using neonicotinoids, that may not mean other potentially harmful chemicals are no longer used on campus

“There’s a lot of insecticides that are just as toxic that do the same job,” he said. “They are just not attached to colony collapse disorder.”

Todaro said that Lafayette should live up to the standards it sets for itself.

“It’s about being the environmental stewards that we tout ourselves to be,” he said. “On our website, on the homepage it says ‘Lafayette College, stewards of the environment.’ So we should live up to that. And I think in getting rid of neonicotinoids that’s what we’re doing.”