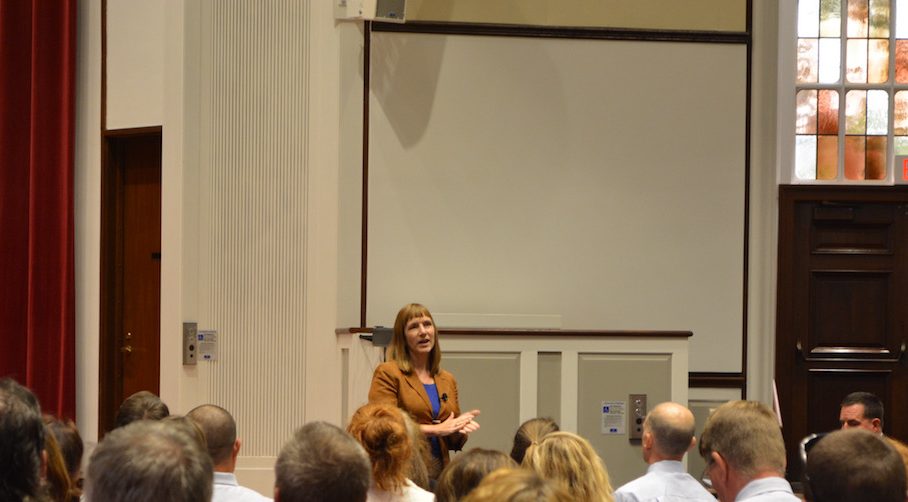 President Alison Byerly opened her third town hall meeting at Lafayette with comments on the memorial service for Sarah Bramley ’19, expansion plans, the capital campaign and the tenure process.

Comments at the town hall meeting ranged from concerns about lack of faculty diversity to questioning the cabinet’s voice in the president’s decisions.

One of the most vocal members at the meeting was history professor Robert Weiner. He said the comments he made to begin the question and answer portion were unplanned.

“Tell me, members of the [president’s] cabinet, has any one of you ever said to the president, ‘I think you’re wrong’? Stand up if you’ve said that,” Weiner said.

This statement was met with gasps from some audience members. Once many members of the president’s cabinet stood up, laughs could be heard from the audience.

Afterward, Weiner said he was happy, albeit surprised, that as many cabinet members stood up as they did.

“I expected based on what people had told me, and not just about her, but about the cabinets of other presidents, that there would be fewer who would stand up than did,” he said. “So I was pleasantly surprised that that many did volunteer to say that they had opposed the president’s decisions or tried to get her in a clear way to change her mind.”

Weiner said in an interview after the town hall meeting that the recent “cycle of crises” that have gone on within the school as a result of the decisions the administration have made have left him unhappy with the state of things. He cited the recent conflict over possibly removing DC Posse from campus last spring and the failed tenure case of Spanish professor Juan Rojo as examples of times he has dissented with the president.

As a result of the discontent stemming from these kinds of events, Weiner said he feels “compelled” to take action.

“I’m going to teach every class I teach even better than before. I owe that to my students,” he said. “But I won’t do too much for the school in general until we get a solution here and a mediation of some kind … I’ve stopped coming back to campus at night, because I’m not happy.”

“We have to have minority faculty in order to attract the kinds of students we want to have coming to the institution,” Hovis said.

Byerly and Dean of Faculty Robin Rinehart answered Hovis at the town hall that they are in fact working to increase diversity within the faculty.

Hovis said he is hopeful that the college will develop some type of program for attracting the type of faculty the college needs. One example he suggested was creating a center for African-American Culture and History.

“In America, we have this special history relating to the black experience in America, and there are lingering remnants of that which are very, very obvious in today’s society, and I think a good college has a social responsibility to try to help address those,” he said.

Byerly said that the college needs to remain an open forum for discussion on these kinds of social issues.

“One of the things that I think is important that we all recognize as an academic community is how critically important it is that we remain a positive space for dialogue,” Byerly said on the recent student activities and protests.

Amber Zuber, Director of the Landis Center, requested an update from the President on the search process for the Dean of Equity and Inclusion position. Diorio responded that a committee has met and that the advertisement for the position had been posted online.

“The appointment of the new Dean of Equity and Inclusion is important, and I understand the need to progress carefully to ensure a high-quality pool of candidates,” Zuber wrote in an email.

At the meeting, Weiner also said that the lack of student attendance presented a problem.

“When I saw that no students were coming, I whispered to professor Rex Ahene next to me, ‘Where the hell are the students?'” Weiner said in an interview.

Vice President of Campus Life Annette Diorio said that she did not attribute students not coming to the town hall as a boycott, intentional or unintentional.

“I perceived that students were eating lunch, not purposefully trying to avoid hearing from the president,” she said. “My experience at the last couple of town halls: there weren’t a lot of students there.”

Despite the criticisms, Byerly said that overall the third town hall meeting of her administration on Monday went as expected.

Professor Weiner is absolutely right – Byerly’s recent actions have been questionable at best and appalling at worst. She cannot seriously claim to be working towards diversity and inclusion when she threatened to remove Posse DC last semester, and denied tenure to an astounding Hispanic professor this semester. It is time, as a campus community, to openly hold her accountable, and that should come from professors, students, and alumni alike. As a recent grad, I do hope students become more engaged with these issues, as it is their own education on the line.

I fully support President Byerly and believe she is the best leader we have had in the last 15 years. She is moving the institution forward as fast as fiscally and administratively possible. This giving and engaged alumnus gives a loud yes to this president!!