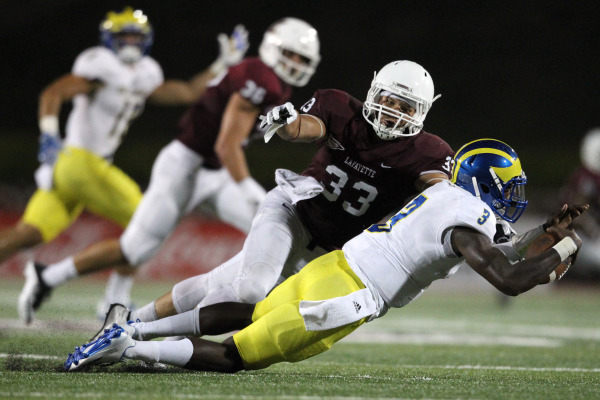 Although it was not the 40-7 shellacking of a year ago that saw Lafayette on the losing end, the Leopards were able to keep it close this time against the Princeton Tigers despite ultimately losing by a score of 35-31.

“It’s the second week in a row we let a football game get away from us,” head coach Frank Tavani said. “We’re battling away but still coming up short.”

After being tied at halftime 21-21, the Tigers went on a 14-3 run to take a commanding two-possession lead into the fourth quarter. Senior QB Drew Reed threw a 24-yard touchdown pass to junior Matt Mrazek with 5:27 left, but the defense was unable to stop the Tigers as they ran the clock out to end the game.

When asked whether or not he thought they would score if he got the ball back, Reed smiled.

“Yeah,” Reed said. “We always feel like we could never be stopped.”

One noticeable difference from last week was the Leopards’ pass game. Reed finished the day throwing for 356 yards, after only tallying 111 yards against Delaware. He also threw for a season-high three touchdowns. Mrazek and fellow classmate Rocco Palumbo carried the way for the receiving corps. Mrazek had two touchdown catches and Palumbo had five receptions for 101 yards.

Unfortunately for the Leopards, however, that was the only thing that changed. After turning the ball over twice last week, the Leopards gave the ball back to the Tigers three times — two interceptions and one fumble. Another area in which they continued to struggle was the run game. Although senior Kyle Mayfield recorded the first rushing touchdown for the Leopards this season, they were only able to gain a measly 60 yards on the ground.

Tavani, along with most players, agree that it isn’t necessarily a skill issue, but rather a lack of execution.

“As long as each person’s doing their assignment on offense, I think we got enough talent to be able to make big plays and put up points,” Reed said.

This weekend, the Leopards will play their last non-conference FCS opponent, Villanova University, at home. Just like their last two games, this will prove to be a test for Lafayette as the Wildcats come in to this game undefeated in FCS play (their only loss is to Pittsburgh, an FBS school).

The Leopards will look to get back to their winning ways before their homecoming game and Patriot League opener against Holy Cross next week.