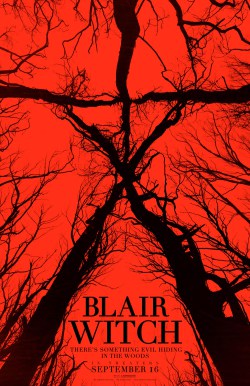 Some films are so ingrained and important to the heart and soul of a genre that their influence is felt across decades and dozens of films. These are, inevitably, remade, rebooted or continued in Hollywood’s drive to relive their past glories. This is what “Blair Witch” is. It’s a perfectly fun film, just an unneeded one.

“Blair Witch” is directed by Adam Wingard and stars James Allen McCune, Callie Hernandez, Corbin Reid, Brandon Scott and Valorie Curry as six people who go into the woods in search of James’ sister Heather, the girl from the original “Blair Witch Project.”

“Blair Witch” is the third movie in the Blair Witch series which includes “The Blair Witch Project,” a movie that changed the horror genre forever and revolutionized how these films are presented, and “Blair Witch 2: Book of Shadows,” one of the worst sequels to ever curse a movie screen.

“Blair Witch” is also, like “The Blair Witch Project,” a found footage movie. One of the most notable things in the film, right off the bat, is the sound mixing. The sound in “Blair Witch” is phenomenal. The sound staff created a dark, echoey ambiance that makes the viewer feel like he or she is truly alone in the woods. The jumps are jarring when they occur, and they contrast well with the silence.

Speaking of jumps, there are a lot of them. The jump scares are unrelenting in this movie, though they sadly aren’t anywhere near as scary as the jump scares in movies like “Insidious” or “The Conjuring.” “Blair Witch” does succeed, at times, in being a very creepy film, if not an especially scary one. However, “Blair Witch” doesn’t stand up to the other horror movies that have come out this year in terms of quality of storytelling and sheer fright. It’s characters are fairly bland and empty, and do not engender much sympathy or even memorability. They feel like nothing more than fodder for the thing that, inevitably, comes to kill them.

The movie isn’t truly bad like “The Forest” or “The Boy,” which came out earlier this year, but it definitely isn’t “The Conjuring 2.” “Blair Witch” is a decent horror movie, and if you have a chance to see it, why not, you’ll have fun. But it is nothing to write home about.