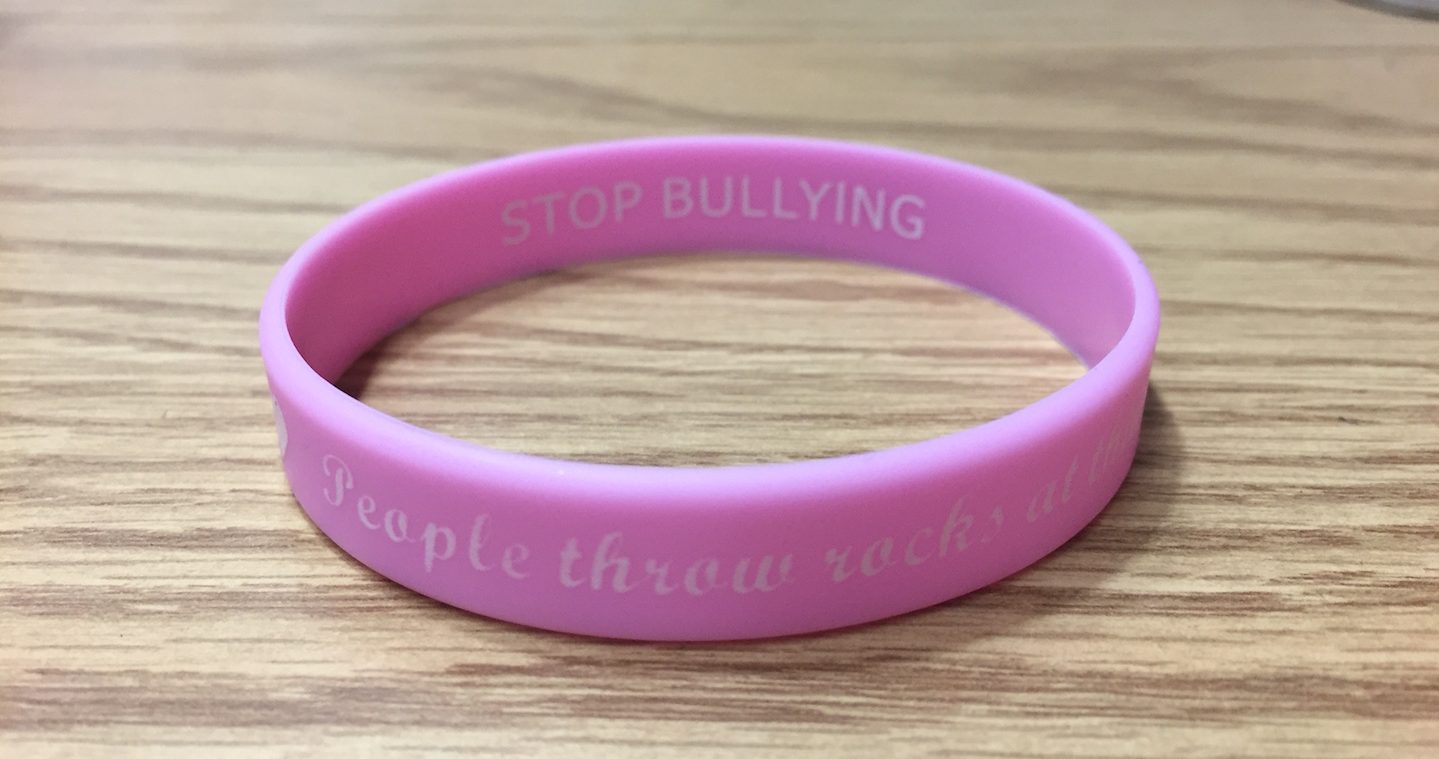 The bracelet handed out at Sarah Bramley’s memorial service on campus. It reads “People throw rocks at the things that shine.” (Ian Morse ’17)

Friends, family and classmates of Sarah Bramley ’19 gathered in Colton Chapel on Saturday for a celebration and remembrance of her life. Bramley took her own life in her home before the beginning of her sophomore year at Lafayette College.

Her memorial was a service dedicated to what many said was an energetic and involved member of the Lafayette community. Those who didn’t know Bramley personally were given a glimpse into who she was through those who knew her best. College Chaplain and Director of Religious and Spiritual Life Alex Hendrickson welcomed all in the community to the service.

Those involved in the planning and the carrying out of the service said they wanted the memorial to shed a positive light and celebrate the joy that those who knew Bramley felt around her.

“It was important for me to create an event where folks could both grieve and be sad, while also celebrating Sarah’s life,” Hendrickson said.

The service also highlighted suicide prevention. Bramley’s friends made bracelets that read, “People throw rocks at things that shine” a quote from “Ours,” a Taylor Swift song. The bracelets were available for all to take in a basket in front of the chapel.

When she spoke at the service, Hendrickson encouraged students to check on their friends when they’re going through tough times, to listen to them even if they don’t have advice and to all the while live courageously.

One of Bramley’s close friends, Vicki Holcomb ’19 said, “I want people to remember Sarah for the bubbly, hilarious, intelligent, and beautiful girl that she was during the year. My biggest fear is that people will think of Sarah as someone that was constantly burdened by mental illness. Yes, she had her hard times but I truly believe she was happy here and loved Lafayette. I hope that the way she ended her life does not change everyone’s perception on the wonderful life she did have.”

Six members of the Lafayette community spoke to memorialize Bramley. Hendrickson, Electrical Engineering professor Ismail Jouny, who taught and advised Bramley, and President Alison Byerly were among those who spoke.

Kristyn Marinelli ‘17, Bramley’s orientation leader, spoke about the bond she formed with Bramley in her first few days on campus.

“Sarah was outgoing and confident as she spoke to me,” Marinelli said. “She was instantly engaging and, immediately, I took to her.”

“Sarah will be remembered as someone who was always smiling and laughing, was engaged in her schoolwork and genuinely liked to have a good time,” she added.

Bianca Buecklers ‘19 and Holcomb, both close friends of Bramley, shared speeches about their friend and how her life impacted theirs. Cadence performed “You’ll Be In My Heart” by Phil Collins.

Soulfege, one of Lafayette’s coed a capella groups, performed “Run to You” by Pentatonix. Molly Martindale ‘19, a friend of Sarah’s, read Psalm 23 from Romans 8:38-39.

Following Martindale, the Lafayette Chamber Singers sang “Ubi Caritas” by Ola Gjeilo. Hendrickson said that the English translation of this song begins with the lines, “Where charity and love are, God is there. Christ’s love has gathered us into one,” noting that love for both Bramley and for one another was what had brought those at the service together.