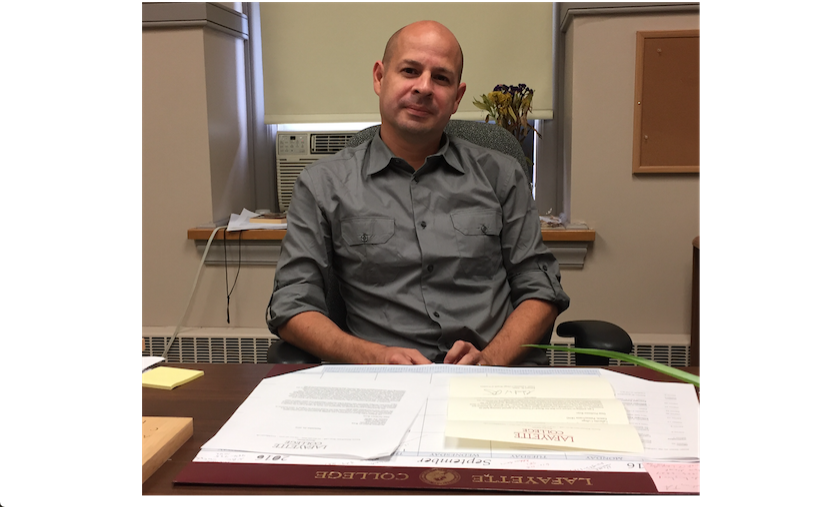 Professor Juan Rojo sits at his desk with the letter to the faculty and the one to himself. (William Gordon ’17)

Professor Juan Rojo walked to the president’s office after class on Tuesday afternoon. An email told him there was a letter waiting for him from the board of trustees.

Exactly three weeks before, he had announced at a faculty meeting that he would drink only water and sports drinks to protest both his tenure denial and what he believed was an effective absence of faculty governance. A week later, Rojo had ended his strike, and faculty had voted 121-35 to urge the board the give him tenure.

Rojo said he didn’t expect a reply from the board so soon.

The two-paragraph letter, written by chair of the board Edward Ahart ’69, told Rojo that the board met last Thursday and decided to uphold its previous decision. Rojo was told for the third time that he was not getting tenure.

“I was more or less expecting this, but it still stings,” he said. A four-page letter was also sent to the faculty after Rojo received his letter.

“There’s nothing new here that we haven’t seen before,” he added, referring to the letter to the faculty.

In the letter, addressed to the clerk of the faculty and professor Rob Root, the board affirmed that “all current procedures were followed appropriately” in Rojo’s tenure case, and so it declined to reverse the decision. The board did not mention Rojo’s tenure file.

The board of trustees is the only body capable of granting tenure after hearing the recommendations from the department faculty, a tenure review committee and then the president, according to the faculty handbook.

In Rojo’s case, the first two groups voted 6-0 and 6-1, respectively, to grant him tenure. President Alison Byerly, noting what she called a lack of teaching “distinction” based on student evaluations, did not agree with the committees, and Rojo was denied tenure.

In the letter to the faculty, the board wrote that it believed the commitment to “the highest possible quality education for our students is perhaps [its] most important single priority.”

“…in declining to concur with the recommendation of the PTR committee, the President applied the standards of distinction in teaching that have been established by the Faculty and the Board, and fulfilled in good faith her role in the tenure review process as assigned to her in the Faculty Handbook,” the letter read.

The board ended its letter noting that it supports discussion and examination of the tenure process. The board also endorsed the section of the faculty handbook reading, “Integral to the mission of Lafayette College is the concept of shared governance.”

In a letter addressed to Rojo, Ahart wrote, “I understand that the tenure review process is by its nature a trying one, and recognize that the length of the process has made it especially difficult in your case. I know that the administration stands ready to assist you, and I hope you will let the Provost’s office know if it can be of help to you.”

When asked what’s next, Rojo said he needed to sit down and think about it first. He noted that there may be future legal action from another body because he said procedures were not adequately followed.

“One of the positives that’s arisen out of this,” Rojo said, “is that because the case has gotten so much attention, I think it makes it more viable that an organization might be able to pick up the case, without me having to go toe-to-toe with Lafayette College.”

“It’s a possibility, but it’s one that I haven’t explored yet,” he added. “I’m definitely going to look into it.”

Rojo would not be the first professor to take up legal action against the college regarding the tenure process. In 1984, professor Richard Matthews was denied tenure, sued the college, and won in state supreme court on the grounds that the college had not provided him documents he was allowed to have.

Byerly met with the department heads as well as some administrators in a regularly scheduled meeting after the faculty were notified of the board’s latest decision on Tuesday. Byerly was already listed on the agenda for the meeting sent out Monday.

Many faculty members did not want to comment on what was discussed in the meeting, but Dean of the Faculty Robin Rinehart confirmed they discussed the tenure process. Math professor Chawne Kimber said the discussion was “collegial.”

“No solutions were discussed,” Kimber said, referring to faculty-administration relations.

“I think we have a tenure process with integrity,” she added. “It’s rare for someone not to get tenure at Lafayette, which is a good thing. We should actually feel proud about that. But people are scared unnecessarily prior to getting tenure.”

Byerly declined to comment on whether or not Rojo’s tenure case was specifically discussed. She said she goes to department head meetings “usually about once a semester.”

“It was, I thought, a very constructive conversation with a variety of thoughtful remarks about what kinds of communication would be helpful going forward and what are the ways we can, as one faculty member said, be good partners in moving the college forward,” she said.

Byerly also declined to comment on details of what was discussed about the tenure process, how much of the meeting was devoted to that topic and whether or not she would have changed her actions in Rojo’s tenure case looking back on these new discussions.

The Lafayette was not given a copy of the meeting’s agenda due to its confidentiality.

The board’s letter recommended that faculty schedule a meeting with the board as soon as reasonably possible.

“We encourage the Faculty to designate a group of representative leaders to meet with representatives of the Board’s leadership and the President to begin the dialogue that is needed to create a greater level of mutual understanding and agreement and as a result, begin to heal some of the divisions that have been caused by the most recent situation,” it read.

On the third day of his hunger strike, Byerly gave Rojo two grapefruit juices. Rojo remarked at the time that he would share one with Byerly when this was over. They still sit on his bookshelf.

“This has not been resolved, as far as I’m concerned,” Rojo said.