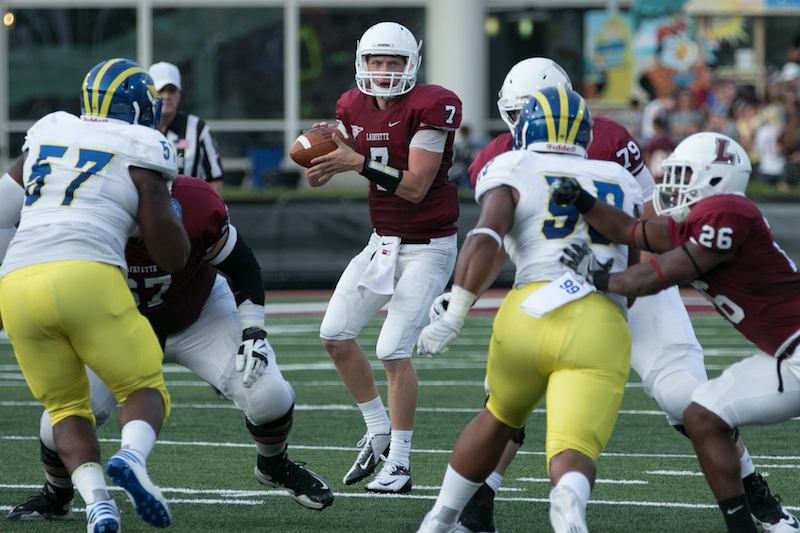 Football games usually don’t end well when one of the team’s only bright spots is its punter. Unfortunately for Leopards, this was the case in their home opener on Saturday.

Coming off a big road win at Central Connecticut State, Lafayette fell to Delaware 24-6 in their home opener behind the Blue Hens’ strong rushing attack. After holding Central Connecticut State to only 85 rushing yards in the season opener, the Leopards defense allowed both Delaware running backs, Thomas Jefferson and Jalen Randolph, to eclipse the 100-yard mark on the ground.

Even more concerning, the Leopards were still unable to get their run game going. After rushing for a paltry 22 yards last week, they only amassed 78 yards on the ground against Delaware.

“The elephant in the room is the run game,” head coach Frank Tavani said. “And the head coach is very displeased with that.”

The Leopards did have their fair share of chances to score. A muffed punt return by the Blue Hens resulted in a Lafayette fumble recovery inside the red zone. Capitalizing on opportunities, however, proved to be the Leopards’ weakness.

“We dropped seven balls in critical situations, two for touchdowns,” Tavani said. “We didn’t make the plays when we had those opportunities.”

Special teams continued their success from last year, as sophomore Jacob Bissell knocked home a pair of field goals and senior Ryan Forrester racked up 390 yards on nine punts. But when a punter has a good game, it does not spell out success for the team.

“No one really ever wants to see me on the field,” said Forrester. “Coach [Mickey] Fein actually tells me every week he hopes I don’t play.”

This week the Leopards travel to New Jersey to take on the Princeton Tigers. In what will be Princeton’s first game of the season, Lafayette will look to avenge their 40-7 loss last season.

“They’re fresh and healthy as ever can be,” Tavani said. “They’re a very good football team, very well coached and well prepared. But I have a lot of confidence in us regardless of what happened in the past.”

With a win, the Leopards will secure their first victory against an Ivy League team since 2012, when they beat University of Pennsylvania 28-21.

The Leopards hope to return to the win column against Princeton and build momentum going into Family Weekend when they take on Villanova University.