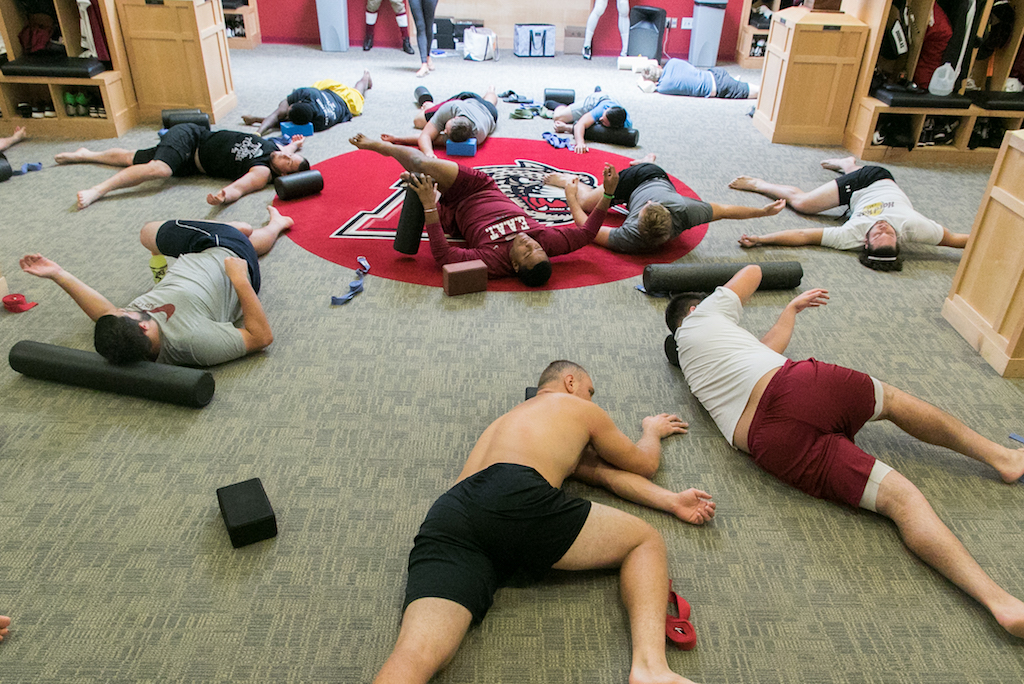 What do a Navy Seal Training program and yoga have in common?

They are both unconventional training methods used by Lafayette College sports teams in order to gain an advantage on competitors.

In an effort to improve both the physical and emotional health of their athletes, a number of teams have begun doing yoga. Additionally, the baseball team participated in a Navy Seal Training program to help enhance mental toughness and promote team bonding.

The football team began doing yoga during their summer training which started this past June. Once a week, members of the team attend a yoga session. This has continued into the regular season, with those players who played considerable amounts in games attending yoga on Sundays in an effort to help their bodies recover.

The players have learned to embrace the activity, according to senior captain Draeland James.

“The guys love it, they all feel great after it,” James said. “I don’t think anybody wants to stop doing it just because of how great they feel after doing it.”

The captain noted that in addition to using yoga as a recovery method, he has seen gains in his own core strength, body control and flexibility.

This is important to the football team in particular, as they spent the 2015 season plagued by injuries. Yoga comes in addition to a number of efforts made by the coaching staff to prevent injuries, such as eliminating hitting in spring play and changing the schedule of preseason camp.

James said that the team has experienced fewer injuries so far this season than they did last fall. Some of that, he said, can be attributed to yoga.

“Our guys are staying a lot looser in their muscles and stretching a lot more,” James said. “There’s more body consciousness—if something is hurting it really helps you recover. It helps us be mindful of how our bodies feel.”

“As athletes gain strength in their muscles, they may lose some of their flexibility,” Charity Hyde wrote in an email. “Practicing yoga on a regular basis allows athletes to perform more efficiently by providing ease in joints, fascia and muscles, and can prevent injuries that may occur during the course of their season.”

There are also mental and emotional gains that can be made by doing yoga.

“The yoga practice benefits not just the physical body – yoga has a positive effect on the brain,” Hyde wrote. “The mediation exercises practiced in yoga promote mental strength and flexibility. I encourage the students I work with to let go of the chattering in their brain (negative, critical thoughts) by focusing on the sensations they observe in their body.”

In addition to the football team, the field hockey team and men’s soccer team have participated in yoga with Hyde over the past year, while men’s lacrosse has begun attending classes since returning this fall.

“I’ve found that yoga has really helped me recover, especially when we have two games in one weekend,” said Ellen Colbourne, a junior field hockey player. “It’s a good way to regenerate.”

The baseball team has also looked to diversify their training methods to gain a competitive advantage over opponents. On Sept. 3, the team attended a Navy Seal Training program run by Stonewall Solutions. Senior Trevor Houck noted that the training was a way to engage in team bonding and to work on mental toughness.

“Baseball is so much of a mental and team game, I think doing things like this really benefits us,” Houck said. “Within the Patriot League, I don’t see that much deviation in talent level, but it’s more of who can execute — if your communication is good and your team chemistry is good.”