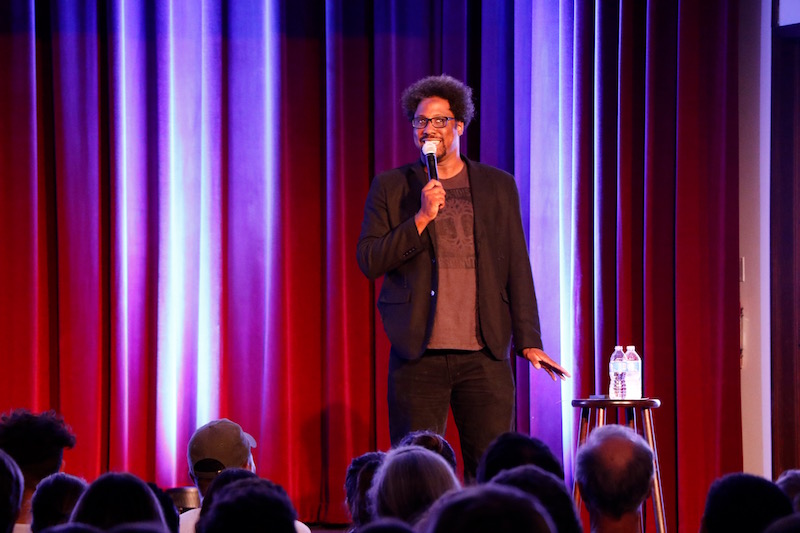 Talking about race in America while being funny and informative can be a daunting task. But that didn’t stop comedian Kamau Bell from doing just that in Colton Chapel Tuesday night.

Bell, a stand-up comedian, started to cultivate his observational, and often edgy, commentary on current events in the FX show, “Totally Biased” with W. Kamau Bell. He then went on to host, “United Shades of America,” where he currently shares his singular take on social issues, while not being afraid to push the envelope.

Tuesday night was no different. Before starting his show, Bell said that when talking about race and racism, he would not be using words that made the audience feel safe and comfortable. He said that words such as “Diversity,” “Martin Luther King Jr.,” and “The N Word” (literally, the phrase, “The N Word”) would have no place in his show.

Bell confronted the view many people adopted after Barack Obama went into office, that a Black president signaled the end of racism, and listed example after example of why that claim was completely false. He flashed ads by major corporations across the screen proving his point. The American Red Cross published a poster for pool safety encouraging kids to “Be Cool, Follow the Rules.” Children following pool protocol were deemed cool, and most of the children deemed “not cool” were black. In another instance, the University of North Georgia released a catalog depicting a running race on the cover. The illustration featured two white men crossing the finish line, a woman trailing behind in heels and a black man struggling along at the end.

After talking about racism in sports, citing the discrimination faced by Colin Kaepernick and Jeremy Lin, Bell talked about the #BlackLivesMatter movement. He jokingly raised the question, “Shouldn’t we say #AllLivesMatter?” Then, he said that the problem with #AllLivesMatter is that shuts down black people and moves the conversation away from the movement.

The way to “dismantle racism” is to claim your race. Bell parted with a few other requests as well: put less racism in the world, and stop asking black people how they wash their hair or if you can touch their hair. Ending racism is about respect not satiating curiosity, he said.