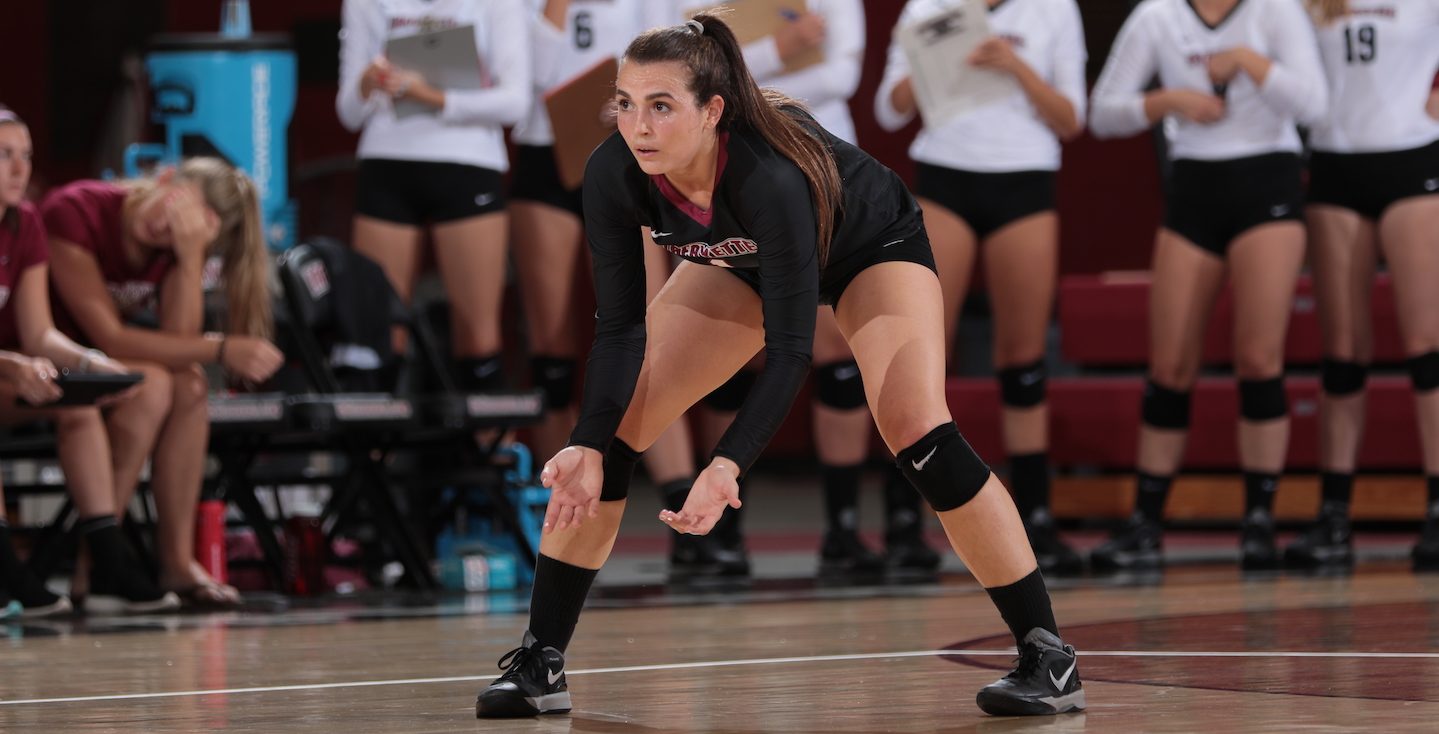 Katie Kidder ’18 waits for the ball at a match. (Courtesy of the Athletic Department)

Katie Kidder: We were really excited to get our first win on Friday. We had a tough game on Tuesday against LaSalle so it felt good to get a win.

KK: We focused on attacking more in Saturday’s second game.  We had way less unforced errors in that game so that definitely helped us with our win. Providence is a good team and we just went into the game against St. Peter’s working on the things that didn’t go as well in the first game.

ML: Is it difficult to maintain focus through an entire weekend facing multiple opponents?

KK:  Yes, it definitely is. It’s a lot of volleyball and we were all very exhausted after it, but we worked on a lot that week after our game against LaSalle so it was great to have so many opportunities to practice what we had been working on.

ML: What did the team learn from this weekend’s success?

KK: We learned that our serving and passing is definitely the most important part of our game, and because that was so strong this weekend it helped us be very successful, so we’re going to continue to work on that as the base of our game and then the rest will follow.

ML: Your team has a lot of freshmen playing integral roles. How have you all adapted to playing with each other in a new group?

KK: They came in and meshed well with everyone right away. It feels like we’ve been playing with them for so long; it was such an easy transition. They’re a great group of girls with a lot of talent.

ML: How does your position as the Libero give you the chance to contribute differently from the other players on the court?

KK: Playing in left back is an important position because the block usually takes away the right side and the ball gets funneled to left back. It’s kind of like you control the defense so you have to be very vocal. When we switch defenses you have to communicate that to everyone and notice tendencies of the other side so we can change it around.

ML: What are some of the team’s goals for this fall?

KK: We are working really hard in our three preseason tournaments and are wanting to carry that into the Patriot League, which is the most important of our season, so we’re just working to be completely ready for that and to get a lot of wins in Patriot League.

ML: What’s the longest volleyball game you’ve ever been part of?

KK: In club, one time I played to 38-40 because you have to win by two.  That took about two and a half hours.

ML: What was your favorite Olympic sport to watch this summer?

KK: Besides volleyball, I really enjoy watching gymnastics, because they’re literally like superhuman.

ML: You’re from Manhattan Beach, Calif.  Do you play any beach volleyball?

KK: I do. In high school it was a varsity sport so we would play indoor in the fall and beach in the spring. I miss it and I wish Lafayette had a team.

ML: Which is harder, and which is more fun?

KK: Sand is hard for moving around, but it’s more fun, especially for short people, because we get to be craftier with our shots. I really like indoor, though, because it’s a team sport instead of just doubles, so it’s fun to be on such a big team and work towards the same goal.

ML: How did you spend your summer?

KK: I interned in New York City at Atlantic Records.

ML: What is your favorite part about being back on campus?

KK: I missed my team and everyone at school, and I’m really excited for being in season.